The history of Riesling wine

Like the valley in which it originates, the history of Riesling wine contains many twists and turns. From the grape's first documented purchase in 1435 to its meteoric rise, fall, and subsequent resurgence — the Rhine's noble vine has a centuries-spanning story to tell, one of rich winemaking tradition, supreme quality, and everlasting endurance.

The rise and rise of Riesling 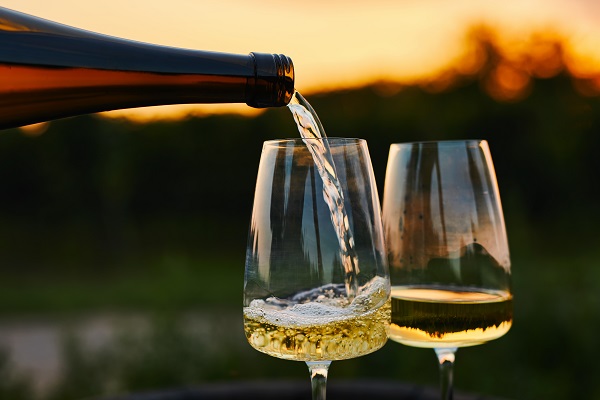 Likely to be native to Germany's Rhine Valley, in the March of 1435, Count John IV of Katzenelnbogen's 22-shilling purchase of six Riesslingen vines (later becoming known as Riesling) from a vineyard in Rüsselheim, gave us our first recorded mention of the new white grape variety.

Fabled to be a wild vine from the Rhine Valley, DNA evidence traces Riesling's origins to the Gouais Blanc grape hailing from Gaul, modern-day France, and once commonly cultivated by Celtic tribes for winemaking. The ‘Grandmother’ of such admired wines as Chardonnay, Petit Verdot and Chenin Blanc — Gouais Blanc was parented with a Germanic wild vine, giving rise to Riesling.

While we have evidence of the grape's lineage and genetic makeup, as well as some remaining historical accounts of the vine, the origins of the name ‘Riesling’ remain somewhat mysterious. Two conflicting theories from the 15th century suggest Riesling could be a derivative of Russling, meaning dark wood or, Rissling for poor blossoming, which may be an ode to the vine's poor bloom during harsh weather.

Quietly tended to by monks and noblemen, the grape had a peaceable existence throughout the 15th and 16th centuries. Listed in German Botanist Hieronymus Boch's beautifully illustrated Kreutterbuch of 1577, Boch describes Riesling as "growing on the Moselle, Rhine and the district of Worms". It wasn't for another two hundred years that Riesling gained its ubiquitous popularity, taking its place as Germany's most popular white wine.

Following the Thirty Years' War and the French taking control of the Alsace region, destroyed vineyards were replanted with Riesling, a trend that continued decades later with the Archbishop of Trier's 1787 decree that Riesling varietals should replace the spoilt vines of the Rhineland.

As the Riesling vine continued to dominate the Rhine Valley, by the 1850s, Riesling had become a highly sought-after, fashionable wine, fetching higher prices than those of Bordeaux or Champagne.

World Wars I and II brought further destruction to the region's vineyards, and in the aftermath, earlier-ripening vines became the preferred choice, inhibiting the production of Riesling. Though, the enduring grape returned, steadily regaining popularity until, in 1996, Riesling once more became the most widely planted vine in Germany.

Riesling is a highly versatile grape, producing varying types of wine, dry and sweet. Germany, Austria, and Canada have a rich historical tradition of creating Ice Wine (Eiswein) made from Riesling grapes left to freeze on the vine. Ice Wine is harvested and processed frozen, and the concentration of natural sugars creates a deep, fruity dessert wine. There is also a longstanding tradition of late harvest or Spätlese wines. Late harvest wines allow the grapes to hang to the vine long past their usual picking time. Through this process, the grapes develop a fungus known as Noble Rot, the beneficial use of which being discovered accidentally in the late 18th century when Riesling picking began late, though the resulting wine was still of excellent quality.

The characteristics of Riesling wine 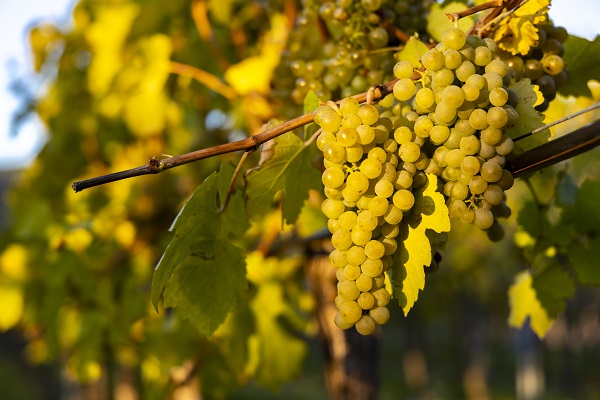 Riesling is an aromatic grape with notable acidity and is often balanced with residual sugar, giving the wine a crisp, citrus taste. Rarely oaked, the wine has natural fruity flavours and floral aromas, with notes of honey, lime, apricot, and peach frequently apparent within a Riesling's taste profile.
Riesling is an excellent example of a grape variety expressing terroir, with the taste of Riesling varying depending upon the origin of production and the environment in which the vine is grown. The Riesling of Germany is often sweeter than its Alsace counterpart, a more dry, leaner-tasting wine. However, floral and citrus flavours are often evident across variations.
A white wine rarity due to its potential for improvement after ageing, Riesling has been known to be enjoyed at an age surpassing 100 years from bottling. Aged Rieslings are infamous for their potent scent akin to petroleum or kerosene. While potentially off-putting to the uninitiated, this powerful fragrance is the hallmark of an aged wine's quality among Riesling enthusiasts.
Thanks to its versatility, balance, and acidity, Riesling pairs well with different foods and flavours. The harmonious pairing with spicy food is a well-documented combination, with Riesling proving to be an excellent accompaniment to Southeast Asian cuisine, as well as traditional foods of the Rhine such as Schnitzel, Bratwurst, and its Alsatian parallel Knack d'Alsace.

The wine, the Rhine, and the Moselle

Running through Germany and the French region of Alsace, the Rhine and Moselle are the life force of Riesling, with 56,000 acres surrounding the rivers dedicated to the cultivation and production of the wine. Throughout the landscape, you'll find taverns, open-air markets, fine dining establishments, and even dedicated events and festivals taking great care in honouring the region's favourite grape.
Nestled on the left bank of the Rhine, south of the medieval market city of Mainz and the neoclassical spa city of Wiesbaden lies a thin strip of lush green land known as the Rheingau, home of the infamous Rheingau Riesling. As the river sculpted the Rheingau Mountains, underlying rock became exposed to the valley. Aeons of weather events later, including the ice age winds carrying vital minerals, the perfect environment for the Riesling vine came into existence. The geology combines perfectly with the region's climate, allowing Riesling to thrive in the wind-sheltered slopes, mineral-rich soils, and temperate, elevated climes. Monasteries, castles, and half-timbered taverns, all of great importance to the history of Riesling, dot the picturesque Rheingau countryside. In Rheingau's wine-producing town of Rüdesheim, the former Cistercian monastery of Eberbach Abbey stands in testament to Riesling's rich past. Once home to the vastest vineyards of medieval Europe, it was here at Eberbach that late harvest wine, Spätlese, originated. Today, hundreds of the estate’s hectares remain dedicated to cultivating a contemporary Riesling steeped in tradition.
At the intersection of the Rhine and the Moselle lies the historic Roman city of Koblenz; from here, Germany's oldest wine-growing region, the Moselle region, stretches southeasterly across the painterly landscape towards the city of Trier and the Luxembourg border beyond. The Moselle Valley was once an ocean, and during the Palaeozoic era, merging continents compacted the sea floor, creating slate. Slate substrate causes difficulty for most standard farming practices — however, these soils are perfect for cultivating wines, namely Riesling wine. Today, the stunning Moselle River weaves through the spectacular landscape, and since the majority of wine produced here remains in the region, it's an ever-popular location among Riesling enthusiasts.

One-third of Germany's Riesling is grown in the Moselle Valley. The sun-soaked vineyards that cling to the slate hills create the ideal environment for cultivating light, naturally fruity Riesling. In 125 towns, almost 5,000 winegrowers nurture their wines in a region of dramatic and challenging landscapes. The Moselle Valley is home to some of the steepest vineyards in the world, and sharp inclines require most of the region's wine to be picked by hand. The arduous picking process occurs on vertiginous slopes, with some sites built upon an astonishing 70-degree gradient.
If you were to go south along the Rhine from the German city of Koblenz, you'd arrive at another of Riesling's most important regions, the unique and multilingual French territory, Alsace. The Alsatian wine region is a stone’s throw from the timbered architecture of the historic Alsatian capital, Strasbourg, and stretches alongside the cobbled streets of Colmar down to the commune of Thann in the south of the region. Alsace's Germanic influence has impacted the history of Riesling in the province; though subtle differences in the geology, climate, and winemaking process assure that Riesling d'Alsace has unique characteristics.
Alsace has been home to Riesling cultivation since the 15th century. Today, at the foothills of the Vosges Mountains, 20% of Alsace's vineyards are dedicated to Riesling vines. Being the more southerly region, the growing cycle of Alsatian Riesling begins earlier than across the border in Germany, and a collage of different soils and substrates – from limestone to clay, shale, granite, and sandstone – influence the various flavours of Alsatian Riesling. The mountains, hills, and plains are all cultivated, creating a gamut of terroirs and aromas. 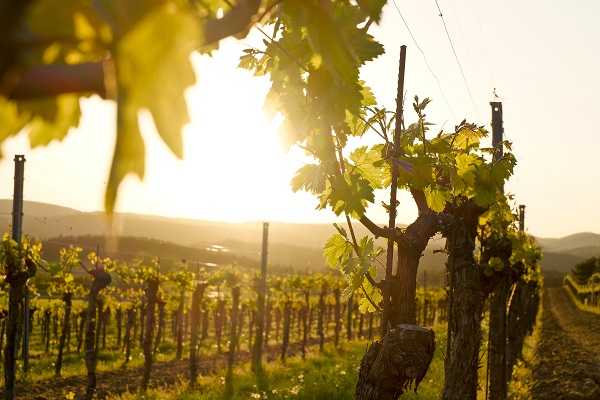 Riesling once lived in the shadows of other European white wines, its reputation dented by poor quality imitation Rieslings of the 1960s and 70s, often mistaken for the genuine article. Today, sommeliers around the globe frequently place Riesling at the top of the list of best white wine grapes in the world. The wine's beautiful home regions attract visitors seeking an unrivalled harmony of magnificent scenery and exquisite wines direct from the source. From humble beginnings, the noble grape now ranks among the top three white grape varieties worldwide, and year after year, its popularity continues to surge.

An Emerald Cruises river cruise throughout Europe’s iconic waterways offers our guests the chance to uncover each city, town, and village we visit through a number of included excursions. For those guests looking to delve a little deeper and truly immerse themselves in local life, our DiscoverMORE programme offers a wealth of opportunities.

Unearth the Riesling growing regions of the Rhine and Moselle with our extra-special DiscoverMORE excursions. In Kehl, tour the Alsace wine route with a tasting; in Rüdesheim, enjoy a wine tasting at Schloss Johannisberg; and from Koblenz, visit the Moselle Valley and Cochem Castle.

Ready to uncover Europe and Riesling-producing regions of Germany and France? Download your FREE European river cruising brochure to learn more about our itineraries and DiscoverMORE programme.