One of the great cities on the banks of the Danube River, Budapest is rich in culture and history. As the capital of Hungary, there are many beautiful landmarks to see and activities to partake in. 24 hours in Budapest can quickly pass you by but being well prepared ensures you get the most from your visit.

Below, we detail a range of ways for you to enjoy your day in the city. From the sights, sounds, and tastes, you’ll experience the best of Budapest by following our guide.

What to do in Budapest in one day

Watching the sunrise over Budapest with a cup of coffee and a light breakfast is a great way to start your day. The city shines in the early hours with the ripples of the Danube dazzling in the morning light.
For those who enjoy a morning stroll, there are several vantage points close to the river where you can see the sunrise in all its glory. The views from Buda Castle and the Fisherman’s Bastion offer a truly mesmerising early morning view of Budapest, with golden light bouncing off the roof tops and seeping into every street.

As the city starts to stir, the true delights of Budapest open up to you. Take some time to explore the stunning sights and sounds along the Danube, as the architecture that lines its banks tells much about the city’s storied past and blend of cultures. The Hungarian Parliament, a Gothic revivalist masterpiece completed in 1904, is a great first stop. Forty-five-minute tours take in the old House of Lords and the Hungarian Crown Jewels if you want to learn more about the city’s history.

While at times a sombre experience, a tour of Budapest’s Jewish heritage sites is a must while you are visiting the city. Budapest has the largest Jewish community in central Europe, and their religion forms a significant part of the city’s identity.

On the tour, you’ll visit important locations such as the Jewish Museum, Raoul Wallenberg Holocaust Memorial Park, and Dohány Street Synagogue — the largest synagogue in Europe. You will learn how the locals were oppressed during the Nazi invasion, but also how the community stood strong and refused to let their cultural heritage fade away even in times of conflict.

There’s no better way to spend lunchtime in Budapest than with a culinary tour of the Hungarian capital. The country has a range of speciality dishes for you to sample, such as rustic goulash, traditional stuffed cabbages, and sumptuous sausages.
For those with a sweet tooth, Hungary has a range of indulgent treats. Chimney cakes are deliciously decadent, made from dough roasted over charcoal and covered in caramelised sugar. Drummer cake is another stunning Hungarian treat; made with chocolate buttercream and a sponge base — it’s even served at parties and weddings.

The neo-Gothic Great Market Hall is certainly worth exploring. It is Budapest’s largest and most expansive indoor marketplace with plenty to see. Explore the stalls and find an array of fresh produce to take back with you, as well as a range of local wines and liquors. You can also find a selection of souvenirs here to bring back for your family and friends (or as a treat for yourself).

After spending so much time exploring the city, the Budapest spa experience may be exactly what you need to fully unwind before the evening. A city famous for its spas, a relaxing dip in the thermal baths will soon loosen up any knots. You can also enjoy a deep massage or pamper yourself with a facial.

What to do in the evening in Budapest

Halfway through your 24 hours in Budapest, you may already feel like you have packed plenty into your stay, but there is still so much to experience. Enjoy a traditional Hungarian dinner on board your Emerald Cruises Star-Ship prepared by our highly skilled chefs. Fresh, local ingredients add to the culinary experience, delivering the tantalising authentic tastes that the country is known for. The culture of Budapest is as rich as it is interesting, and a Hungarian folklore show is one the best ways to learn all about the country’s customs. On board your Star-Ship, traditional songs and dances will provide you with plenty of entertainment as the sun sets over the Danube River.
While enjoying the show, why not indulge in a glass of local wine or beer for a full authenticity?

What to do in Budapest at night

For those looking to experience something a little different to do at night, you should make your way to Szimpla Kert, one of Budapest's famous 'ruined bars'. Housed in a formerly disused building, it has a unique, ramshackle appearance that makes for a memorable backdrop to your favourite choice of drink. The location is a little off the beaten track, but a fun and friendly vibe awaits you.

What better way to round off your 24 hours in Budapest than with a good night’s rest? After exploring the delights around the Danube, tasting the most delicious local dishes, and even watching a traditional Hungarian folklore show, sleep should come easy to you. In the morning, you’ll feel fully refreshed and ready for the day ahead.

24 hours in Budapest with Emerald Cruises 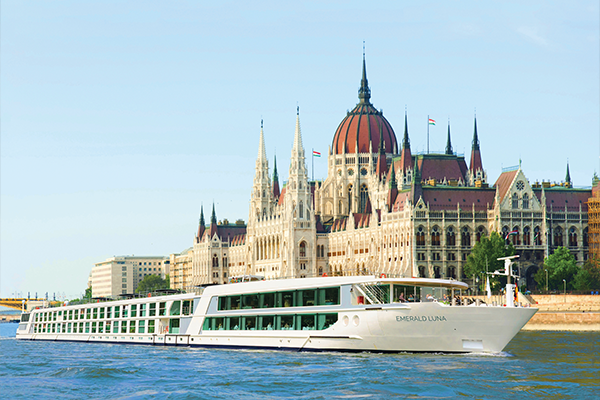 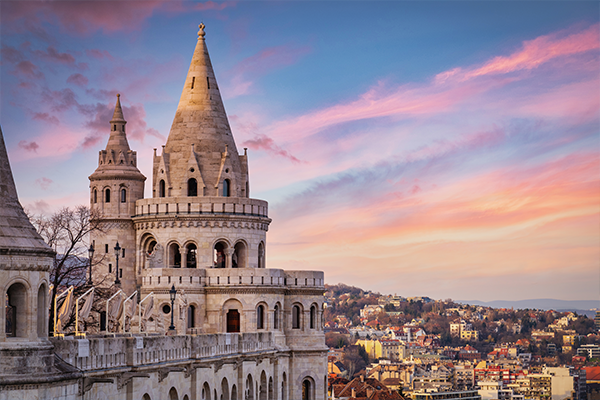 There’s a great deal to do and see in Budapest, and a thoroughly well-organised trip ensures you get the most enjoyment out of your day in the city. Many of our Danube river cruise itineraries include a full 24 hours in Budapest, where you will have the opportunity to explore Budapest with our knowledgeable guides while taking some time to see the sights at your own pace. On selected itineraries, you’ll also have to opportunity to extend your holiday with a pre- or post-cruise city stay in the Hungarian capital.

For more information, download your free Europe River Cruises 2023 brochure, and learn more about everything you will experience on an Emerald Cruises Danube river cruise.