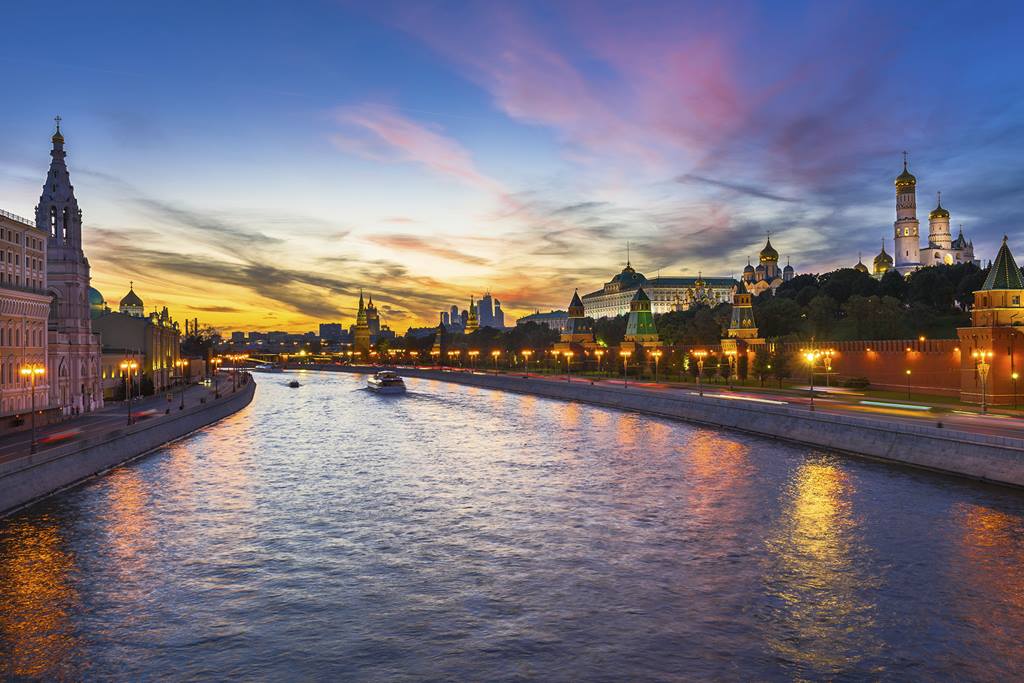 More than just a river, the Volga is the lifeblood of Russia

Stretching for over 2000 miles, the great Volga is the longest river on the European continent

Flowing from the rural foothills of central Russia to its mouth on the Caspian Sea. The literal and symbolic lifeblood of Russia, the Volga has been an instrumental part of local life for thousands of years, and has inspired artists, writers and cultural movements for generations, leading to it being affectionately titled the ‘Mother Volga’.

Here, we’ll be exploring the mighty course of the Volga, from its source in the Russian heartland to its end at the Caspian Sea. Discover the highlights of this majestic waterway, and the encounters you can look forward to as part of a Volga river cruise from Emerald Cruises.

An introduction to the Mother Volga

The Volga’s journey begins in the Valdai Hills, an upland region to the north east of Moscow. From here, it cuts a course east, passing close to the Russian capital before flowing through the historic cities of Yaroslavl and Nizhny Novgorod – famous strongholds for Russia’s ancient tsars.

Winding eastward, the Volga reaches the city of Kazan, one of the most powerful and ancient cities of the motherland. Capital of the Republic of Tatarstan, Kazan is renowned for its ancient sacred sites, domed Islamic vestiges and the powerful Kazan Kremlin – a UNESCO World Heritage Site of captivating architectural splendour.

From Kazan, the Volga veers south, its course set to the Caspian Sea. Flowing through a handful of Russia’s ancient frontier cities, the Volga eventually reaches Volgograd, the last urban centre on its course. Formerly known as Stalingrad, Volgograd is revered for its poignant WWII heritage, as it is among the most devastated of all Russian cities during the war. The Battle of Stalingrad is commemorated by The Motherland Calls, Europe’s largest statue and one of Russia’s most important symbols.

The Volga River enters the northernmost tip of the Caspian Sea, its delta system comprising of hundreds of narrow channels which lie 28 metres below sea level. This connection to the Caspian has, over the centuries, proved one of Russia’s most significant and influential trade links, affording passage to the instrumental east-west trade route of the Great Silk Road.

For centuries, Russia’s leaders, both imperial and communist, have sought to exploit the passage of the Volga. This has led to the creation of a vast network of canals which link the river and its tributaries to other Russian waterways, including the Neva River, which flows from Lake Ladoga to Saint Petersburg on the Gulf of Finland, and the Moskva River, which cuts through the heart of the Russian capital. Such links have made the Volga Delta one of the most well-connected river basins on Earth – facilitating simple passage from Saint Petersburg to Moscow, and on to the shores of the Caspian.

Not only is the Volga impressive in length, but also in scale. Along its route lie some of the largest lakes on the continent, the greatest of which could be described as inland seas. While some of these water bodies are natural, others are manmade, the outcome of centuries of rerouting and damming of the river’s course.

From art and music to literature and folklore, the Volga has influenced many aspects of Russian culture, mythology and tradition. Located entirely within the Russian Federation, Mother Volga is viewed as the lifeblood of the nation, and this collective love and appreciation for the river is tangible along its course.

Highlights on the Volga river

At Emerald Cruises, our Russian Waterways river cruise itinerary focuses on the Upper Volga, making use of the Volga-Baltic Waterway to transport our guests from Saint Petersburg to Moscow via the Volga’s extensive river basin. Travelling on-board the MS Nizhny Novgorod, you’ll experience the elegance of Saint Petersburg and the grandeur of Lake Onega, before travelling southeast to explore the cultural highlights of Goritsy, Yaroslavl and Moscow.

Take a closer look at some of the highlights of our Russian river cruise itinerary below.

Billed as one of Europe’s most beautiful cities, Saint Petersburg is Russia’s elegant and commanding second city. Built from the ground up by Peter the Great in the 18th century, Saint Petersburg stands as testament to Russia’s imperial past, its palaces, mansions and parks designated UNESCO World Heritage Site status for their architectural splendour and indelible cultural value.

The highlights of Saint Petersburg

• Visit the spectacular Hermitage, one of the world’s largest art museums, which is housed in Saint Petersburg’s beautiful Winter Palace.

• Marvel at the Church of the Saviour on Spilled Blood, whose ornate domes and exquisite medieval Russian architecture make it one of the great highlights of a Volga River cruise. Situated on the Svir River, a waterway which connects two of the largest lakes in Europe, Onega and Ladoga; Mandrogi is one of several traditional villages within the Volga river basin which capture the rural charm of pre-Revolutionary Russia. Here, traditional houses are decorated with intricate woodwork and colourful facades, showcasing the age-old customs of the Volga.

The highlights of Mandrogi

• Experience the charms of ‘Old Mother Russia’ with a tour of Mandrogi’s fascinating heritage buildings.

• Explore the studios and workshops of local artisans, whose creations include the famous matryoshka dolls. Kizhi is an island on Lake Onega, the second largest lake in Europe and one of the great inland seas of the Volga. Here, you’ll experience the stunning natural beauty of the Volga river basin, and have the opportunity to explore the Kizhi open-air museum, which houses dozens of historical wooden structures, many of which are centuries old. Kizhi Pogost is home to some of the most beautiful examples of wooden architecture in Russia, and its twin 12th-century churches have been designated UNESCO World Heritage Site status.

• Cruise the waters of Lake Onega en-route to Kizhi, gazing out at the awe-inspiring vastness of Europe’s largest lake from MS Rossia’s Sun Deck.

• Tour the Kizhi Architectural Ensemble in the company of an experienced local guide.

• See the octagonal bell tower of Kizhi’s UNESCO World Heritage-listed church, as well as some of the best-preserved wooden structures in all of Russia.

The medieval enclave of Goritsy is the first of a string of historic settlements which line the banks of the Volga to the northeast of Moscow. This beautiful town, which is dotted with monasteries, played a significant role in the development of the Russian Orthodox Church, and is today regarded as the gateway to one of Russia’s most famous monasteries, Kirillo-Belozersky.

• Encounter beautifully-preserved examples of Russian medieval architecture in the heart of this historic town.

• Visit the Kirillo-Belozersky Monastery, which was once the largest monastery and fortress in northern Russia.

• Hear stories of Russian folklore and myths from an experienced local guide, including tales of Cyril of Beloozero and the legacy of the Time of Troubles. 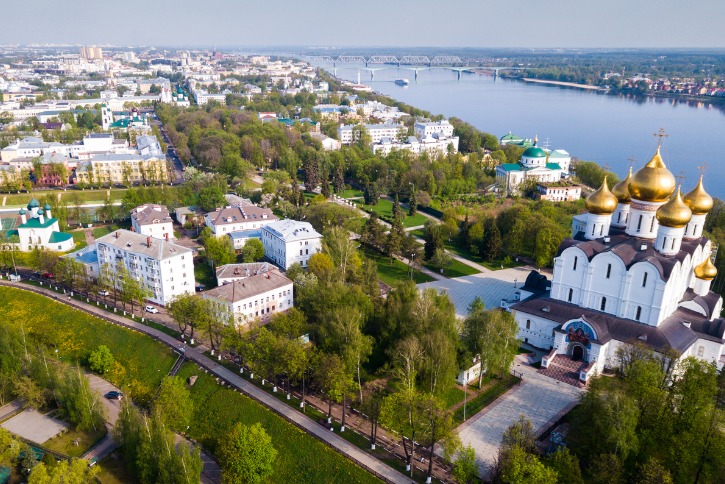 The ancient city of Yaroslavl is located on the confluence of the Volga and Kotorosl rivers, something which contributed to it becoming one of the most significant settlements of medieval Russia. Founded by Yaroslav the Wise, much of the city is designated UNESCO World Heritage Site status, with an inspiring collection of prized heritage buildings at its heart.

The highlights of Yaroslavl

• Enjoy a guided tour of Yaroslavl with an expert local guide, including an in-depth showcase of its beautiful UNESCO World Heritage-listed centre.

• Visit the Church of St Ilya the Prophet and witness the beauty of its delicately-restored 17th-century frescoes.

• Stand at the spot where the Volga meets the Kotorosl, marvelling at the power and influence of these majestic Russian waterways. 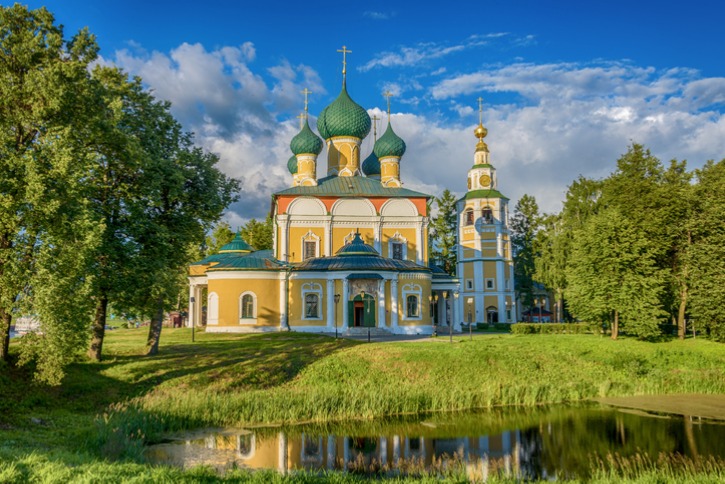 Uglich, one of the great bastions of the Upper Volga, is revered for its peppering of ancient churches, many of which can be seen from the water. Here, you’ll have the chance to see some of the foremost examples of architecture in Russia, many of which were erected during the Romanov period in the 17th and 18th centuries.

The highlights of Uglich

• Marvel at the Church of St Dmitry on the Blood, which is considered the finest of Uglich’s Romanov-era architecture.

• See the Cathedral of Transfiguration, whose beautiful octagonal stone bell tower is considered one of the great triumphs of Russian architecture.

• Learn about Uglich’s role in the Time of Troubles, as you explore the highlights of the city as part of an expert-led tour.

Few superlatives do justice to Russia’s enigmatic, exhilarating capital. From the architectural icons of Red Square, which include St Basil’s Cathedral and the mighty Kremlin, to fascinating centres of heritage such as the State Historical Museum; Moscow is a city like no other, and you’ll experience its many captivating highlights as part of a comprehensive tour.

The highlights of Moscow

•  Book your cabin online today! Download our brochure or call us to learn more.

Captivated by the enigmatic charm and iconic cultural highlights of Russia? Our Russian Waterways river cruise showcases the very best of this diverse, inspiring country – from its incredible cities to its traditional backwaters. To learn more, download your complimentary brochure today. To book, contact your travel agent or call us on 1 855 444 0161.