The top 6 cities on the Rhine River

The Rhine River stretches all the way from the Swiss Alps into the North Sea, flowing through six countries on its path – Switzerland, Liechtenstein, Austria, Germany, France, and the Netherlands. The Rhine Basin also flows into Belgium, Italy, and France. This mighty waterway is nicknamed the ‘romantic Rhine’, an ode to the backdrop of fairy-tale-like medieval towns, luscious green forests, and vibrant vineyards through which it winds.

One of Europe’s longest rivers, the Rhine sails right through the heart of the continent, passing through some of the continent’s most beautiful and interesting regions on its way. We’ve put together a list of the top six cities not to be missed on a cruise of the Rhine and surrounding areas.

Our list of the top 6 cities on the Rhine 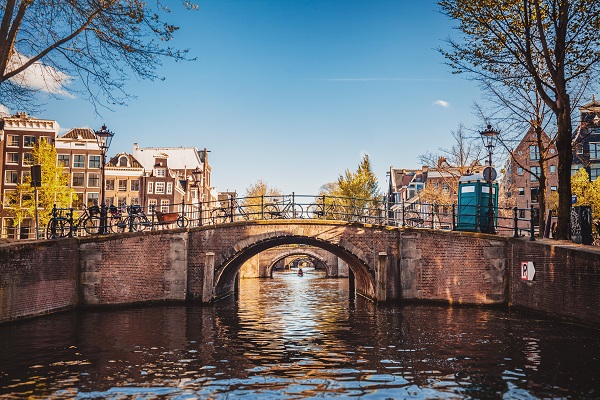 The Netherlands’ capital, Amsterdam, is a vibrant city, bustling with people and culture while still maintaining a laid-back vibe. This city marks the point where the Rhine ends its course and flows into the North Sea. Considered to be one of Europe’s most open-minded cities, there is much to see and learn in Amsterdam.
The architecture of Amsterdam is immediately recognisable to visitors, especially within its historic centre, which is home to over 7,000 classified buildings. Also known as the ‘Venice of the North’, Amsterdam boasts an intricate canal system, with 1,200 decorative bridges linking over 90 islands within the city. The city is also home to the River Amstel, which creates marshy ground around its banks. Due to this, many of the surrounding buildings are built on top of wooden plinths, giving the city a unique look.

• Rijksmuseum: This museum houses one of the world’s largest art collections. Among the collection are works by Vermeer and Rembrandt, a showcase of still-life paintings and a study in the Dutch landscape.

• Van Gogh Museum: This collection of over 500 paintings and 200 drawings by Van Gogh – arranged in chronological order – takes visitors on a journey through the life and works of one of the world’s most famous artists.

• Anne Frank House: Visit the home of Anne Frank – the house which became a hiding place during WWII for the teenage Holocaust victim and diarist. Take a virtual journey through this emotional building and learn about Anne’s life along the way.

Switzerland’s Basel is truly a feast for the eyes, boasting a kaleidoscope of architectural fusion. Here, you’ll see modern skyscrapers and historical buildings standing side by side. Although one of the country’s smaller cities, Basel is not short on attractions and even has a remaining Old Town area.

Basel is dream destination for art lovers and history buffs, hosting a multitude of galleries and museums and home to a thriving art scene. An intimate and charming city, Basel has a number of parks to visit and waterfront areas to stroll along – and visitors will be drawn to these areas in the city’s good weather, with the Swiss gem basking in as many as 300 days of sunshine per year.

• Art Basel: This Swiss city is home to the world’s largest art fair, which takes place each summer. Here, visitors will see installations and collections from artists across the globe in this spectacle of art and design. A bonus for art lovers: Don’t miss a visit to Kunstmuseum Basel, Switzerland’s largest art museum.

• Altstadt: Visitors to the city should not miss out on trip to Basel’s Old Town. Here, among the cobblestone-clad streets, you’ll find many Swiss heritage sites. The buildings here date back as far as the 14th century, and a themed walk around the Altstadt is sure to delight.

• Basel Minster: This medieval church is an architectural wonder! Its red sandstone façade and twin towers surely make this minster stand out. A trip up a narrow spiral staircase inside the church provides visitors with spectacular views of Basel and the Rhine. 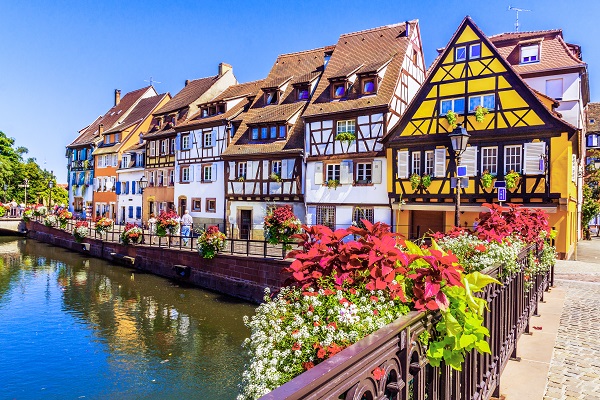 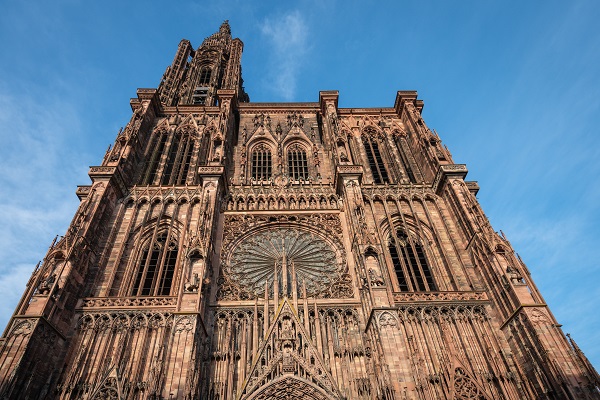 The French city of Strasbourg is the capital of the country’s Alsace region. Translating to the ‘City of Roads’, Strasbourg’s centre is a UNESCO World Heritage-listed site. A blend of classic Gothic architecture and more modern buildings, this city has a long and tumultuous history, which remains interesting until present day.
Strasbourg dates back to medieval times, and this influence is still felt within the city today. Throughout the 16th and 17th centuries, the city suffered much destruction during religious struggles. Its absorption into France in the late 17th century saw much of the city repaired – but troubles arose for Alsace again during WWI and WWII, with the country being annexed by Germany multiple times. These days, animosities have been resolved in the region, and Strasbourg has since become the seat of Council of Europe, the European Court of Human Rights, and the European Parliament.

• Petite France: A trip to Strasbourg’s historic quarter, known as ‘Petite France’, is like taking a journey back through time. Its winding streets are full of timber-framed houses, most famously the ornate Gothic building Maison Kammerzell.

• Strasbourg Cathedral: This cathedral is an exemplary display of Gothic architecture. Standing at 142m, this cathedral was once the world’s tallest building – it is now the sixth-tallest church in the world. The cathedral’s astronomical clock is not to be missed, displaying automated moving figures throughout the day.

Germany’s Cologne (or Köln to the locals) is a cultural hub located in the heart of the country’s Rhineland. With much of the inner-city area having been destroyed during WWII, its subsequent rebuilding has created a unique cityscape, with the mighty Rhine splitting the city in half.

Cologne is famous for its Karneval season, which begins on 11th November each year at precisely 11:11am and lasts all the way through until Ash Wednesday the following February. During Karneval season, visitors to the city will see the Karneval Corps troops and many people in costume, as well as hearing themed music.

• Hohenzollern Bridge: Crossing the Rhine, this bridge is a sight to behold. The bridge’s original form was destroyed during WWII to prevent allied troops from entering the city but was quickly rebuilt following the conflict. The bridge is now an important travel route connecting Cologne to other cities.

• Cologne Cathedral: Another stunning example of Gothic architecture along the Rhine, the two towering spires of this cathedral dominate Cologne’s skyline. This is Germany’s most-visited landmark, containing the Shrine of the Three Kings, a triple sarcophagus which is said to contain the relics of the Three Wise Men

• Fragrance Museum: As might be apparent from its name, Eau de Cologne  originates from this German city, and only scents created in the city limits can bear this title. The Fragrance Museum is housed in the world’s oldest fragrance factory and tells the story of the city’s fragrance producing history. 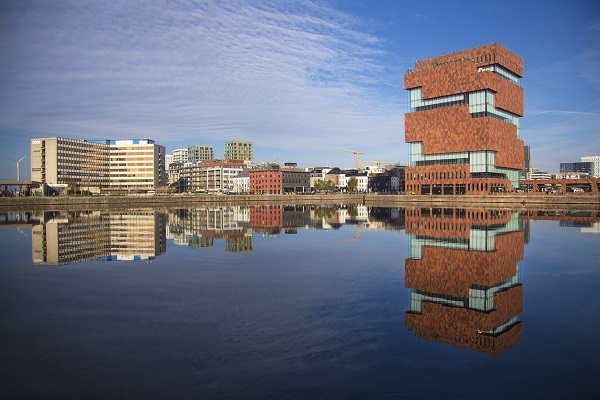 Antwerp seems to have a sort of freedom of expression which you don’t find in Belgium’s capital. Here, you’ll find a blend of old and new, with ornate buildings to admire, many cafés and coffee shops to sample, and plenty of fashion and jewellery stores to shop in until you drop – and don’t forget to look out for some of Europe’s best chocolatiers here.

• Grote Markt: The Great Market Square is located in Antwerp’s old quarter. Here, you’ll find many marvels of architecture, such as the City Hall and Guildhall, and sculptures including the Brabo Fountain. From the square, you’ll also be able to take a horse and carriage tour of the city.

• Museum aan de Stroom: A fairly new addition to the city, this museum (know as ‘MAS’) is located long the River Scheldt. The museum’s collections detail the history of Antwerp and its connections throughout the world.

• Central Station: More than just a train station, Antwerp’s main transport hub is a feat of eclectic architecture – a blend of multiple movements and styles. The city’s Central Station should be on your list of things to visit, even if you’re not catching a train!

The Swiss city of Zürich lies on the large Zürichsee lake, which feeds into the Rhine River. This city is backed by snow-clad mountains, offering picturesque landscape views wherever you look. Zürich is also the biggest of Switzerland’s cities, meaning there is something for everyone here.
Considered to be one of the financial capitals of the world, Zürich is a forward-thinking, modern city with elegant charm. It’s also within the world’s top 10 most liveable cities, so it’s popular with tourists and locals alike! A trip to Zürich will immerse you in Switzerland’s medieval past and their contemporary outlook all at once.

• Kunsthaus: This art museum is widely regarded as one of the most important galleries in Europe. It’s estimated that this gallery was established as early as the 1700s, and its collection boasts works spanning from the Middle Ages through to present day, including works by Van Gogh and Monet.

• Zürich Opera House: Zürich’s neo-baroque Opera House is one of its marvels of architecture, located in the city’s largest square, Sechseläutenplatz. The Opera House first opened in 1891, and visitors can still attend regular opera and ballet performances here.

• Grossmünster: Zürich’s largest church was built in the 12th century and features two Romanesque which stand out against the cityscape. For those wanting to get active, visitors can ascend the towers and take in views of Zürich’s skyline.

Visit the cities of the Rhine with Emerald Cruises