From the Valdai Hills to the Caspian Sea, the great Volga weaves through the heart of central Russia, connecting powerful cities like St Petersburg and Moscow with the vast and remote landscapes of the Russian west. The river has had a profound influence on Russia’s culture, customs, traditions and folklore, and is often referred to as Volga-Matushka or Mother Volga – thanks to its life-giving properties.

While it’s virtually impossible to conceive of the scale of the Volga without experiencing it first-hand, we’re here to help you uncover the highlights of this proud waterway - from Moscow’s inimitable Red Square to the rich history of Yaroslavl. Join us as we hear from William Young, Sales Development Manager at Emerald Cruises, about the extraordinary experiences that await on the Volga – from walking across Moscow’s inimitable Red Square, to uncovering the rich history of Yaroslavl. 1.Take in the Renowned Works of the Hermitage Museum

Occupying the elegant imperialist buildings of St Petersburg’s Palace Embankment, the Hermitage is a vast art gallery and museum, rivalling the Louvre in its volume of notable works and artefacts. Founded by Empress Catherine the Great in the 18th century, the Hermitage now contains the largest collection of paintings in the world, including a vast array of works gifted by Prussian merchant Johann Ernst Gotzkowsky.

Here, William fills us in on the extraordinary works that you can expect to see in the Hermitage: “During a private guided tour of this monumental heritage centre, you’ll see Raphael’s Madonna Conestabile and Michelangelo’s Crouching Boy, not to mention some of St Petersburg’s most highly-prized architectural highlights – from the Winter Palace to the Hermitage Theatre. For art lovers and culture seekers alike, this is an absolute must-see.”

With free time to explore St Petersburg on our Imperial Charms of Russia itinerary, we’d encourage you to experience more of Russia’s second-city, including its fabled ballet heritage. St Petersburg became Russia’s ballet capital in the 18th century, with the formation of the Mariinsky Ballet, one of the world’s leading ballet companies. Peter the Great was the first Tsar to introduce ballet into Russian culture, and his work was continued by Empress Anna, who employed several French dance masters to help popularise ballet. Today, the Mariinsky Theatre remains one of Russia’s foremost ballet centres, regularly staging masterpieces of Russian ballet and opera. Whether you stay for a show or simply enjoy the architecture, the Mariinsky is a must on your visit to St Petersburg. 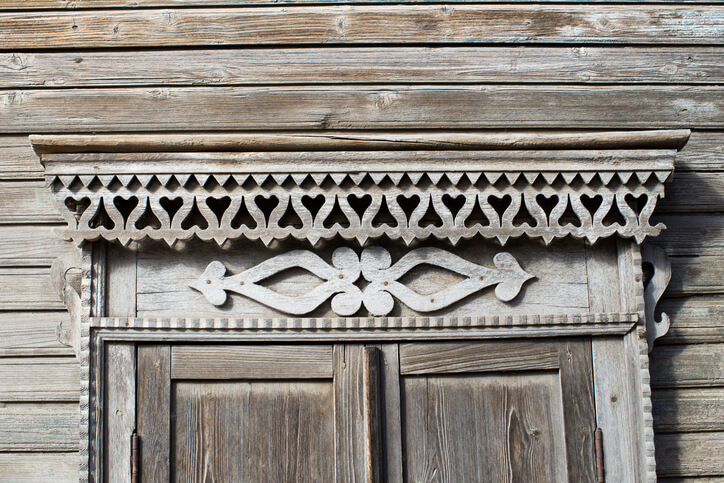 Innumerable villages, rich in folklore, history and traditions, litter the passage of the Volga as it sweeps southward towards the Caspian. One of the most captivating of these is Mandrogi, a heritage village littered with colourful wooden ‘izba’ houses, where local people continue to follow a simple and traditional way of life.

On a recent Volga river cruise, William experienced the simple wonders of this age-old Russian village, and said of his time there: “Mandrogi is a village with a wonderful history, and this is plain to see from its traditional wooden houses, which look surprisingly Scandinavian. During your time there, browse humble stores selling fine Russian handicrafts, including the famous ‘matryoshka’ doll, or visit the Vodka Museum, where you can sample the huge collection of spirits which have become Russia’s most popular export. With free time to discover more of this wonderful village, I’d recommend visiting one of the local bars to experience a little folklore and entertainment, Russian style.”

St Petersburg is a triumph of Russian Imperialism, its wide boulevards, countless bridges and domineering palaces and cathedrals offering a feast of architectural grandeur. On your immersive tour of the city, you’ll bypass such sights as Peterhof Palace, Saint Isaacs’s Cathedral, Peter and Paul Fortress and Catherine Palace. One of the most spectacular sights is the Church of the Savior on Blood, whose romantic-nationalism architecture differs from the neoclassical mainstays of the city. Built during the reign of Alexander III, the church features colourful and ornate onion domes, which represent candles in the Russian Orthodox faith, as well as some 7,500 square metres of mosaics – more than any other church in the world. As well as its sprawling watershed, the Volga River is famous for its vast lakes and reservoirs, the largest of which being Onega. William witnessed the grand scale of this waterway first-hand, saying: “The landscape of Lake Onega is truly extraordinary. Essentially a vast inland sea, the lake is bordered by sprawling forests and traditional villages, and at its centre we could scarce see land. It’s hard to believe that during the winter the lake is not far from being frozen solid, with icebreakers needed to clear the passage at the start of spring. A memorable and striking place, and one I’ll never forget.”

During your Volga river journey, you’ll have the opportunity to sample the very best in Russian gastronomy, from a warming bowl of borsch to the seafood delicacy of shuba. Russian food has a distinct culinary identity, with its origins in hearty peasant fare that offers great nourishment in the country’s extreme climate.

One aspect of Russian cuisine which surprised William during his visit was the country’s baked goods and pastries, of which he said: “We were all taken aback by the delicacy of Russian baking, and how popular bakeries are in major cities such as Moscow and St Petersburg. Bubliks, a kind of Russian bagel, were particularly good, and seemed to be a very popular choice at breakfast time. Be sure to seek out a bakery and try the delicacies on offer while you’re there.” 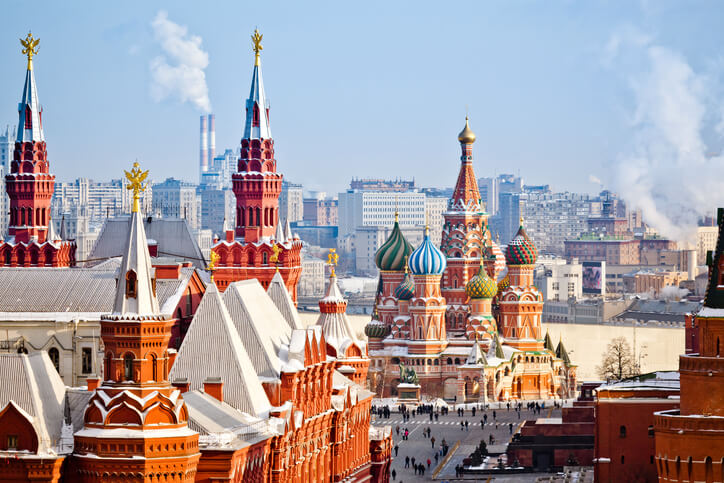 Standing on the banks of the Moskva River for nigh on 900 years, Moscow is the financial and political heart of Russia, and a wonderful showcase that introduces the country’s imperial and Soviet heritage. At the heart of this influential metropolis is the inimitable Red Square, a vast plaza bounded by some of Russia’s most iconic structures, from St Basil’s Cathedral, with its colourful onion domes, to the commanding Kremlin, an ancient fortified complex which serves as the official residence of the Russian President.

Describing his first steps on Red Square, William said: “The Kremlin really hits you, and suddenly all the footage you have seen on TV over the years is right in front of you – evoking images of military parades and the seat of Russian Communism. The building itself is incredibly vast, and surrounded by massive red brick walls that we all envisage. St Basel’s Cathedral sits at the end of the Square, and we were one of the select tour groups allowed inside. The façade of this iconic Russian Orthodox Cathedral, built from 1555 – 1565 by order of Ivan the Terrible, is particularly impressive, and its colourful onion domes are said to represent candles burning. Being able to explore inside this ancient church, with Russian singers in the background, was certainly a highlight of our visit to Red Square.”

8.Learn About the Great Space Race at the Memorial Museum of Cosmonautics

At the height of the Cold War, Russia and other global powers engaged in the fabled Space Race, with the Soviet Union pioneering a new era of cosmonautics. The regime’s historic space programme is documented in Moscow’s Memorial Museum of Cosmonautics, a vast museum dedicated to space exploration.

Describing his experience of visiting the Cosmonautics Museum, William said: “During a private tour of the exhibit, you’ll see iconic remnants of the USSR’s space mission, including Yuri Gagarin’s capsule, original rocket propulsion units and a Soviet-era Krechet spacesuit. It’s incredible to be among such artefacts, knowing their history and that they’ve been in outer space. The tour also includes a lecture and Q&A with a former Russian cosmonaut, providing rare insights into the enigma of Russian spaceflight, and this was a really popular addition to the tour which captured the imagination of the whole group.” 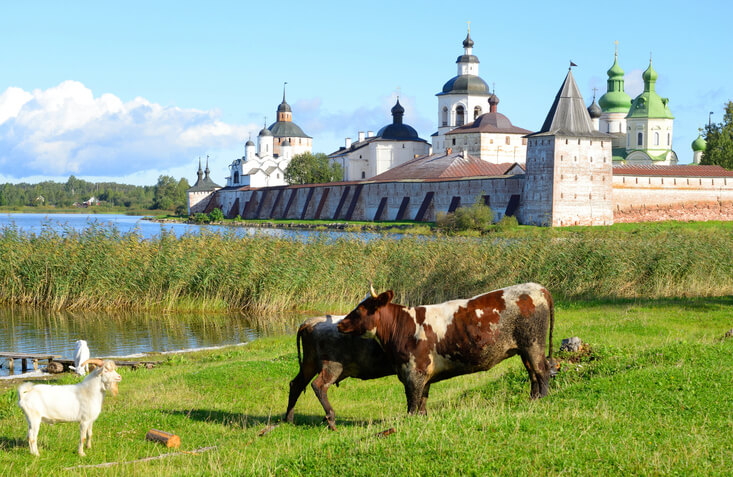 Making port in the typical Russian village of Goritsy gives you chance to uncover the fascinating heritage of Kirillo-Belozersky Monastery, a 14th-century Russian Orthodox monastery once revered as one of the strongest fortresses in northern Russia. The site was founded by St Cyril in 1397 on the banks of Lake Siverskoye, and boasts the incredible Assumption Cathedral, which itself houses a fascinating array of ancient artefacts. In the 16th century, the monastery became the principal seat of Ivan the Terrible, who is said to have found spiritual enlightenment within its walls, and who, it’s believed, had planned to take monastic vows in the cathedral.

Some 175 miles from Moscow lies the ancient city of Yaroslavl, founded by Kiev Prince Yaroslavl the Wise on the right bank of the Volga in the 11th century. Much of this historic city is a World Heritage Site, with its storied heritage and imposing architecture making for a truly immersive sightseeing tour. Marvel at the colourful frescoes of Church of Ilya the Prophet, wander the cobblestones of the 12th Saviour-Transfiguration Monastery, and stand beneath the historic domes, towers and spires of St John the Baptist Church, whose architecture is considered among the most impressive of Yaroslavl’s beautiful Tolchkovo Sloboda district.

A journey on the monumental Mother Volga can help you uncover the wonderful traditions, customs and heritage of central Russia, from the imperial splendour of St Petersburg to the might and history of Moscow. To experience Russia for yourself, click here for our Volga river cruises or call us today on 855 444 0161.