From the historic Ribeira waterfront to the charming bustle of Baixa, Porto is brimming with architectural treasures which reflect the city’s rich history. Romans, Moors, Habsburgs, Britons and, of course, the native Portuguese have all left their mark on Porto, but none have had as big an impact on the city’s illustrious skyline as the Douro – a waterway which has long played a part in shaping the city we know and love today.

Here, we explore some of the foremost architectural wonders of Porto, touching on four distinct styles you’ll see around the city.

Easily one of Porto’s signature architectural styles, the Baroque and Rococo movement of the 18th and 19th centuries had a major impact on the city, and many of its foremost buildings incorporate elements of the form.

The Baroque – and later the Rococo – movements were embraced by Portugal more than many other European nations, thanks in part to the country’s lucrative overseas discoveries. During the 16th and 17th centuries, the city had a seemingly never-ending supply of exotic dark woods, gold and precious stones, thanks to its discoveries in lands like Brazil and the Americas. Gold, wood and gemstones fitted the look of Baroque and Rococo perfectly, with the styles favouring lavish décor and ornamentation.

That said, the Baroque and Rococo movement may not have been so influential in Porto had it not been for legendary architect, Nicolau Nasoni. Born in Italy, Nasoni moved to northern Portugal as a young man, and there created some of Porto’s most striking Baroque and Rococo buildings. It’s impossible to overvalue the influence Nasoni has had on Porto’s town plan, with some of its most beautiful buildings coming from his mind.[i]

Explore some of the city’s finest Baroque and Rococo buildings below. 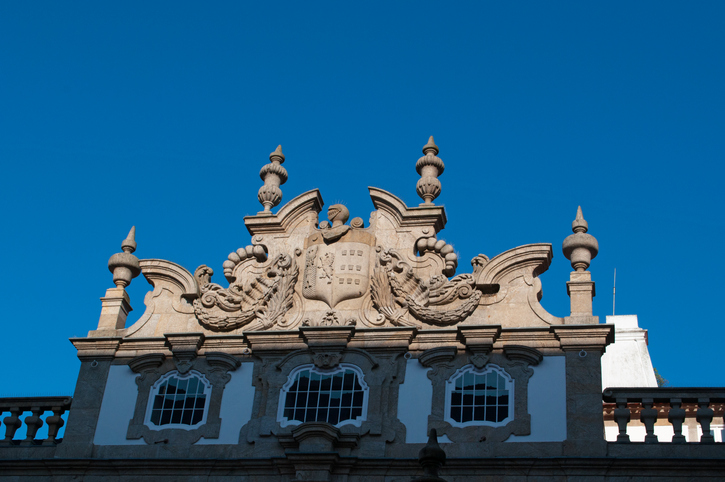 One of the great Baroque treasures of Porto is undoubtedly the Palace of Freixo, a momentous civil monument dating from the mid-18th century. Designed by renowned Italian architect, Nasoni, the palace features all the usual styles you’d associate with Portuguese Baroque – from carved, stucco ceilings to exquisite painted frescos. The palace’s garden is also well worth exploring, its landscaped grounds reflecting the traditions of Italian design. Visitors can enjoy a magnificent view of the Douro from the terrace of Freixo – making it the perfect place to while away a sunlit afternoon. 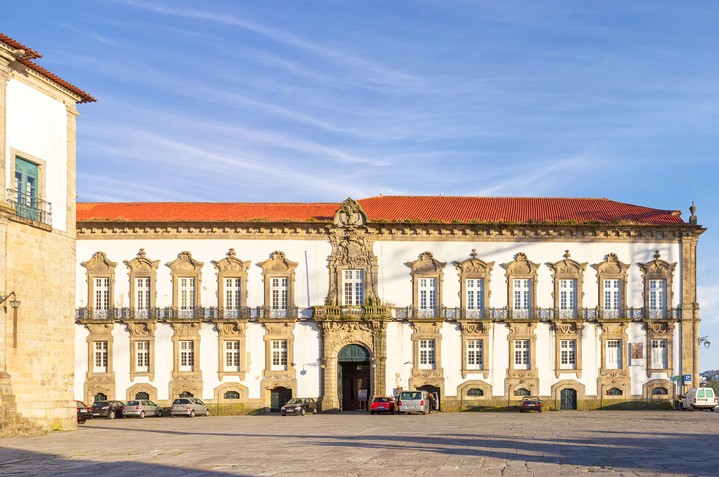 Porto’s delightful Episcopal Palace may be a Baroque jewel today, but the building pre-dates its Italian makeover by around 450 years. A palace has stood on the site since at least the 13th century, with the building reputedly receiving a makeover by Nasoni in around 1737. The palace’s principal façade is incredibly ornate, featuring a central window, coat of arms and a decorative court. Within, exotic dark woods dominate the interior design – a theme typical of the Baroque movement. Revolutionary at the time of its construction in the 1850s, the Church of Carmelitas is a fine example of Portuguese Rococo style. The church was originally built in the 17th century, and later given a facelift, with a highly-ornate Rococo façade added by Nasoni. The exterior sides of the church feature a wonderful blue and white mosaic, while inside, the altarpiece is considered one of the most innovative pieces of Rococo design of the period. 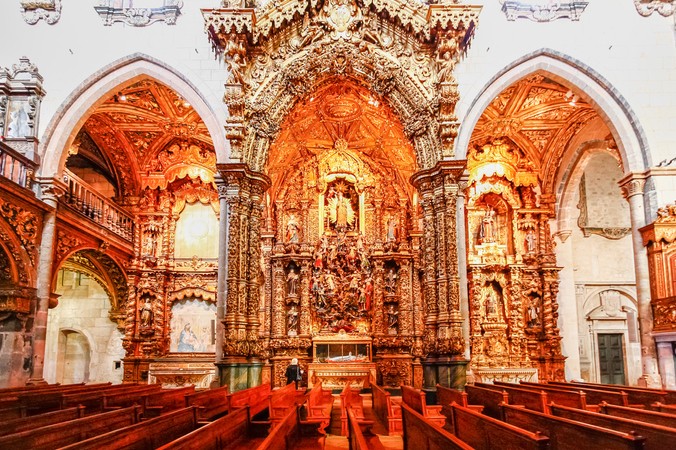 Considered the finest example of Porto Rococo, the Church of São Francisco was established by the Franciscan Order in 1245, and later bedecked in over 300 kilos of gold design, as was typical of the Rococo style. The church features some of the most ornate interior carvings of any building in Porto, the majority of which are constructed from exotic dark woods. While the interior of the church has been heavily influenced by the Rococo style, the exterior remains decidedly Gothic. This is due to a fire which engulfed the interior in 1832, necessitating its reconstruction and redesign.

Thanks to its close ties to Britain (which came about thanks to the lucrative port wine trade), Porto was heavily influenced by the architectural styles which were popular in England throughout the 18th and 19th centuries – not least Neoclassical, examples of which can be seen throughout Portugal’s second city.

The municipality of Porto was keen to showcase the city’s seafaring might whilst remaining an attractive destination for overseas trade partners. As such, architects like Joaquim da Costa Lima and José Marques da Silva were tasked with designing buildings which both demonstrated the city’s commercial power and echoed styles popular in other European cities – with Neoclassical favoured for its ability to blend the functional with the grandiose.

Discover two of the city’s foremost Neoclassical buildings below. 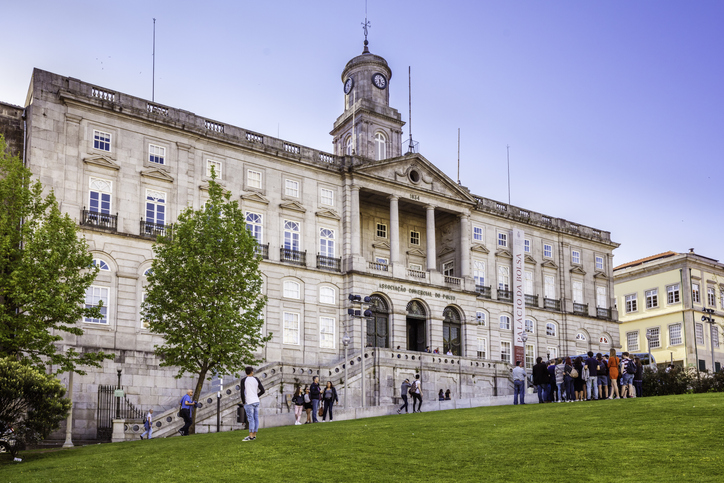 Porto’s magnificent Palacio da Bolsa, or ‘Stock Exchange Palace’, is among the finest examples of Neoclassical architecture in Portugal. The building was commissioned by Commercial Association of Porto – which still resides there – in 1842, but work wasn’t finished on the lavish interiors and decoration of the palace until 1909, shortly before the proclamation of the republic. The palace was designed by Joaquim da Costa Lima, a beloved Portuguese architect, who specialised in the Neoclassical form. Today, the palace is designated a National Monument of Portugal. Regarded as one of the most beautiful railway stations in Europe, the famous São Bento Station of Porto is an architectural spectacle inside and out. The exterior of the station was inspired by French Neoclassicalism, a preferred style of the Porto-born architect, José Marques da Silva, and from the outside, it looks more similar to the buildings of Paris than Porto. Things take a distinct turn towards the native inside, however, with the main chamber of the station featuring over 20,000 white and blue tiles designed and illustrated by artist Jorge Colaço. If you take a closer look at any of Porto’s architectural wonders, this ought to be it.

Not only is Porto home to some of Europe’s finest examples of Baroque and Neoclassical architecture, the city has a wonderful collection of contemporary buildings which have emerged throughout the 20th and 21st centuries – and they’re certainly worth seeking out during your visit.

Porto’s reputation for contemporary architecture stems from the prestigious Porto School, which emerged from the Faculty of Fine Arts and the Faculty of Architecture at the University of Porto. Blending elements of modernism with a desire to adapt to the natural surroundings, the classic ‘Porto School’ look is characterised by minimalism, transparency and clean, pale colours.

Several prestigious architects have emerged from the Porto School, including Álvaro Siza Vieira and Eduardo Souto de Moura, both of whom have won the Pritzker Architecture Prize. Examples of their work can be seen across the city, and the history of the Porto School is documented at the wonderful Serralves Foundation. 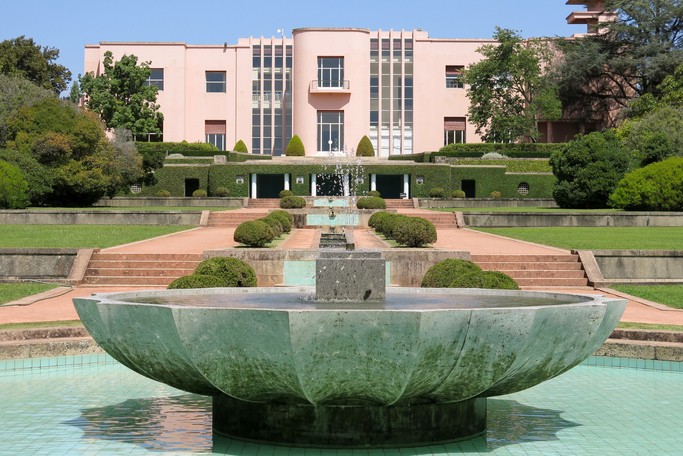 Located in the influential Serralves Park, a cultural institution to the west of Porto city centre, the Serralves Foundation is the centre of contemporary architecture in northern Portugal. The main Serralves Museum was designed by Portuguese architect Álvaro Siza, who is one of the leading lights of the prestigious Porto School of architects. The building features a monumental contemporary façade, which is designed to harmonise with the adjacent gardens and the Serralves Villa, and contains 14 exhibition galleries split over three floors. For those with a passion for modern architecture, this is the place to learn about some of Porto’s great contemporary designers, including Siza, José Marques da Silva and Eduardo Souto de Moura. 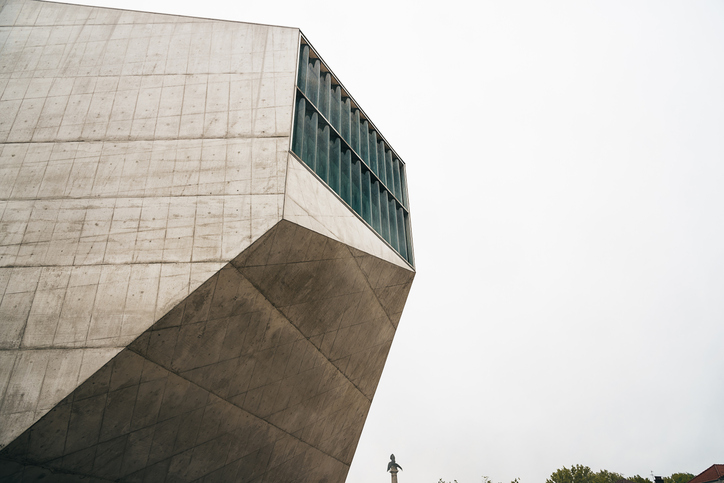 Easily the standout example of modern architecture in Porto, the Casa da Musica is at the cutting-edge of the city’s contemporary architectural scene, arriving in 2001 during Porto’s time as the European Capital of Culture. Located in the Boavista neighbourhood – which hosts other contemporary works from the likes of Marques da Silva and Álvaro Siza[i] – the Casa da Musica is a concert hall whose striking white façade represents both an architectural statement and the very best in modern acoustics. The building was the work of the Dutch Rem Koolhaas-Office for Metropolitan Architecture, and its construction began in 1999.

Experience the Architectural Highlights of Porto with Emerald Cruises

A Douro river cruise is the perfect time to take in the exquisite architecture of Porto, with all of our luxury cruises on the river exploring this illustrious Portuguese city.

Whether you’re keen to explore the Palacio da Bolsa or are inspired by all things Baroque, you’ll love discovering Porto’s momentous cityscape as part of an immersive city tour with a local expert. Our Secrets of the Douro itinerary gives you the option to enjoy an invigorating EmeraldACTIVE guided walking tour of the city, so you can become acquainted with its historic highlights.

Click here to discover more about our collection of unforgettable Douro river cruises or call our team on 855 444 0161 to start planning your holiday today.

Secrets of the Douro
Porto to Porto
On this 8 day roundtrip cruise from Porto, discover the Douro Valley's most inspiring destinations including Régua, Pocinho, Pinhao and stunning Salamanca.
Offers Available
Save $898 per couple Early payment discount per couple
Conditions apply
8 day
From (CAD)
$ 4,446
View Cruise

Lisbon & Secrets of the Douro
Lisbon to Porto
Immerse yourself in authentic Lisbon before taking to the Douro. Leaving the metropolis of Porto behind, you will navigate a path through Portugal’s countryside where vineyards and landmarks await.
Offers Available
Save $2,500 per couple Earlybird fare per couple
Conditions apply
11 day
From (CAD)
$ 4,680
View Cruise

Madrid to Lisbon & Secrets of the Douro
Madrid to Lisbon
Begin your 13 day adventure in Madrid and soak up the culture before travelling to Porto to begin your river cruise through the picturesque Douro Valley.
Offers Available
Save $898 per couple Early payment discount per couple
Conditions apply
13 day
From (CAD)
$ 6,051
View Cruise

Discover the Rivers of France & Portugal
Porto to Nice
On this 15 day cruise, travel from Porto to Nice as you uncover the delights of Portugal and Southern France. Visit Salamanca, Porto, Lyon & Avignon.
Offers Available
Save $2,500 per couple Earlybird fare per couple
Conditions apply
15 day
From (CAD)
$ 8,945
View Cruise