Europe’s great rivers were once integral to trade, providing seamless passage between the continent’s most powerful ports and capitals. These indispensable waterways attracted countless industries to their banks, and remained the lifeblood of European trade until the Industrial Revolution brought railways to the fore in the 19th century.

One such industry to flourish on the banks of Europe’s rivers is wine, with hundreds of vineyards stretching down to meet the water’s edge, where producers could take advantage of the passing trade. Some of the world’s finest wine-producing regions are found close to Europe’s majestic passageways, and you can discover many of them as part of a luxury river cruise from Emerald Cruises.

Here, we take a closer look at some of the exceptional wine regions you can explore and discover during a luxury journey on the rivers of Europe.

The Garonne and Dordogne rivers weave north-west through the Bordeaux region of France, passing vine-laden lands littered with historic châteaux wineries — Siaurac, Pauillac and St. Emilion to name but a few. Collectively, the various wine appellations which fall within Bordeaux and Gironde enjoy the distinction of being among the leading AOC (Appellation d’origine contrôlée) vineyards in France, such is the quality, authenticity and depth of flavour of the wines produced here. 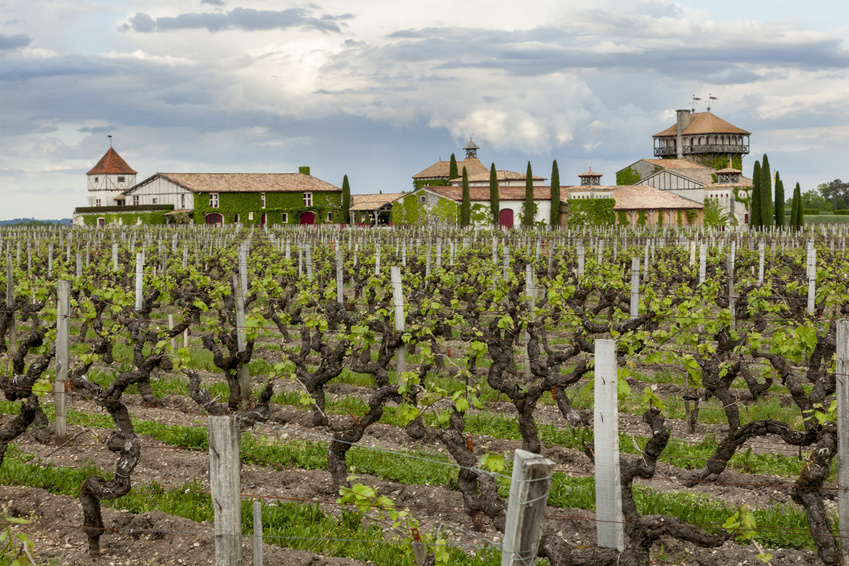 Bordeaux’s viticultural triumphs can be attributed to the quality and variety of its terroirs (a portion of land which imparts a unique quality), of which there are several throughout the region. These distinct environments have led to the development of six Bordeaux wine families, including Blaye & Bourg, Entré-Deux-Mers, Bordeaux Supérieur, Graves and Sauternais, The Médoc and The Libournais — with fine vintages to suit any palate and occasion.

Classic Bordeaux wines are predominantly made using six main grape varieties, three red and three white. For red wines, Merlot, Cabernet Sauvignon and Cabernet Franc are primarily used, alongside several “auxiliary” varieties, which are used to bring a specific personality during blending. As for whites, Bordeaux’s varieties use a mix of Sémillion, Sauvignon Blanc and Muscadelle grapes, perfect for the dry, sweet whites for which the region is renowned.

The beautiful Rhône Valley in southern France is one of the world’s oldest wine-producing regions, with grapes cultivated here since the Ancient Greeks colonised the area in the 4th-century BC. The valley’s tradition for wine-production carried forward to the time of the Romans, and achieved continental fame in the 13th-century, when the papacy of Rome moved to the Palais des Papes in Avignon, and established numerous successful vineyards in the area, including the prestigious Châteauneuf-du-Pape.

Such is the historic quality of Rhône Valley wines that, in 1930, winegrower Baron Le Roy campaigned for the characteristics of Rhône wines to be officially recognised, giving rise to the AOC decrees which govern many different appellations across France today. Le Roy proposed limiting the growing area, grape varieties, methods of cultivation, alcohol content and harvesting period within the Rhône Valley AOC, so that the region’s beloved wines may be enjoyed for generations to come, whilst adhering to the same time-honoured techniques and traditions. 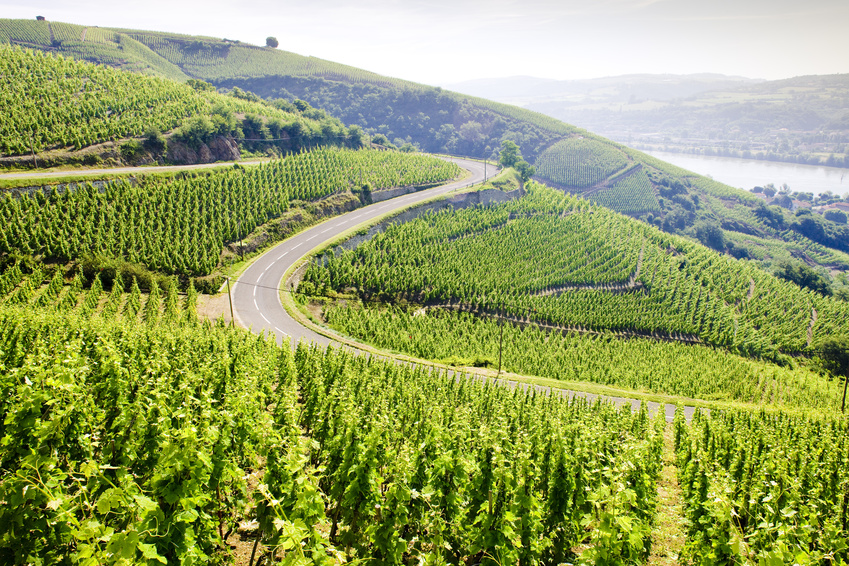 The Rhône Valley benefits from varied terroirs which make it possible to grow a large number of different grape varieties. Between Avignon and Vienne, some twenty-six grape varieties are cultivated, with the major fruits being Grenache, Syrah, Mourvédre and Cinsault for red wines, and Marsanne, Viognier, Roussanne and Maccabeo for whites.

Join us for a river cruise on the Saône and Rhône rivers as they journey southward through Burgundy to meet the Mediterranean Sea, and discover some of the region’s most endearing wine experiences. You’ll be given the opportunity to sample exquisite Rhône Valley wines in Mâcon and Tournon Castle as part of Emerald Cruises shore days.

Experience the satisfaction of a Rhône Valley wine with our 8-day Sensations of Southern France river cruise.

Sun-kissed and fertile, the Douro Valley is among Portugal’s most prestigious wine regions, responsible for the internationally-renowned port wine which brought great wealth to the country in the 17th century and continues to draw fans from across the world today.

The Douro River carves a course through some of the most mountainous landscapes on the Iberian Peninsula, and it’s on these slopes where the famous port wine grapes of the Douro Valley are grown and cultivated. With its vines sheltered from the prevailing Atlantic winds, Douro wines have developed a unique character that’s unlike any other in the Mediterranean, and some would argue that there is no equal in terms of colour, depth of flavour and warming taste on the continent. 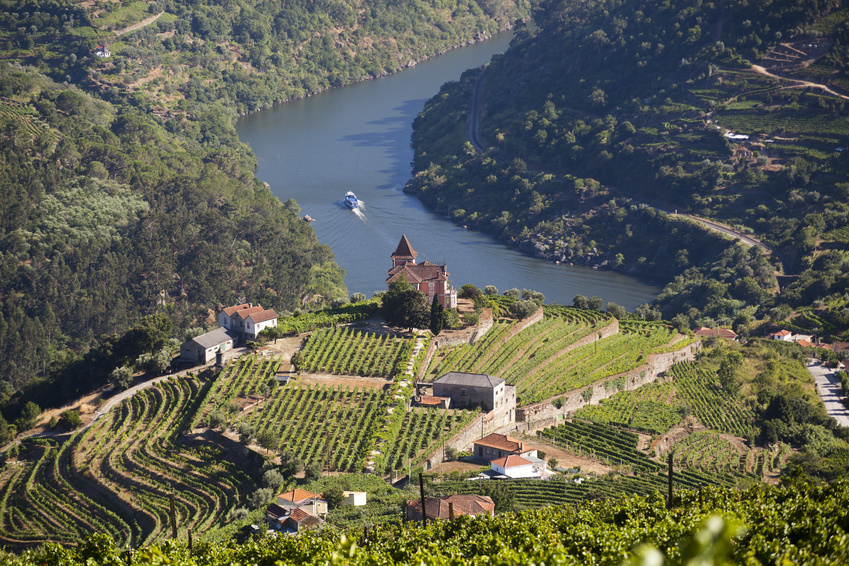 Much of the wine and port of the Douro Valley comes from the Alto Douro Wine Region, which, in 2001, was recognised as a UNESCO World Heritage Site on account of its indelible heritage of wine production and agriculture (which dates back over two thousand years). The Alto Douro district comprises of sunlit vine terraces, dusty quintas (wine-producing farms) and small, traditional villages whose residents owe their livelihoods to local viticulture — placing the region among Europe’s most authentic and time-honoured wine-producing areas.

The Douro wine region is split into three distinct areas, including the Baixo Corgo, Cima Corgo and Douro Superior, with the Baixo Corgo containing the most vineyards of any within the Alto Douro sub-region. Surprisingly, the soil is very poor throughout the Douro Valley, with gnarled grapevines offering small yields of highly ripened, rich fruit — which happen to be perfect for port wine production. Douro port wine is predominantly made using a mixture of five different grapes, including Tinta Roriz, Touriga Nacional, Tinto Cão, Touriga Franca and Tinta Barroca.

As a guest on board the elegant Emerald Radiance, which has been custom-built to cruise the beautiful Douro River, you’ll experience the terraced slopes of Régua and Vinhateiro and sample traditional port wine in Porto.

If sampling Portugal’s rich harvest sounds idyllic, take a look at our 8-day Secrets of the Douro river cruise.

Germany may be better known for its association with beer, but it has historic ties to wine production, too, and nowhere is this legacy better showcased than within the majestic Rhine Valley. With its rolling, castle-topped peaks and fertile grasslands, this is Germany’s historic wine heartland, where ancient wine-producing villages like Linz, Oberwesel and Bacharach reveal the scope and depth of the country’s outstanding and time-honoured wine production.

The Rhine Valley comprises of shale, slate and weathered greywacke soils, which aren’t known for their vine-cultivating properties. Despite this, some 465 hectares of the valley are given over to hillside wine production, with the region’s wine producers overcoming tough conditions to grow full-bodied, fruity wines which are full of Germanic character — something the locals attribute to the volcanic soils found throughout the region. 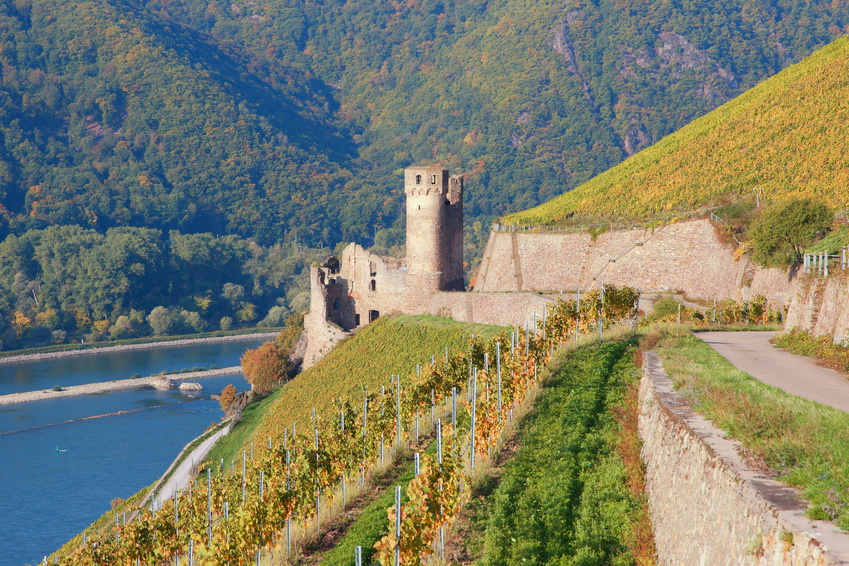 While many different varieties of wine are cultivated in the Rhine Valley, there’s one for which the region has become internationally-renowned, and that’s Riesling. This historic German variety has been produced on the fertile banks of the Rhine for over a thousand years, and is often associated with the vineyards of the Middle Rhine Valley, where it enjoys perfect growing conditions. Riesling is affectionately known as “the queen of grapes” in Germany, and produces tangy, acidic wines with a distinct and exquisite aroma.

As well as Riesling, several other grape varieties are produced on the slopes of the Rhine Valley, including Müller-Thurgau, Kerner, Grauburgunder and Scheurebe for white wines, and Spätburgunder, Dornfelder and Portugieser for red.

To sample the very best in German wine, take a look at our exciting 8-day Rhine-Main Discovery river cruise.

Wine buff or not, there’s no greater pleasure than sampling delicious local produce at source, and that’s exactly what you can look forward to during a luxury Emerald Cruises river cruise. For more information, and to browse our complete collection of river cruises, visit the homepage or call us today on 855 444 0161.