Explore the Rhine’s Most Captivating Castles

Enriching every day spent cruising down the Rhine, the castles emerge over the horizon with reassuring regularity. It’s possible to imagine life a few hundred years ago - when the Rhine was the very lifeline of Germany, providing the major trade route and offering armies tactical advantages – even when peacefully cruising the river atop an Emerald Cruises vessel, glass of wine in hand.

Here’s a selection of the Rhine’s most captivating castles, celebrating the history of Germany and following the development of Europe as a continent through the Middle Ages. Many of these castles can be glimpsed from one of our vessels, and tours are even organised around selected sites. It is possible to pass close by Pfalzgrafenstein Castle when cruising on the Rhine, offering great views of this 14th-century monument. To this day, it has been preserved as a museum, providing an authentic insight into 14th-century life – so you will not find modern amenities such as electricity if you decide to pay the castle a visit.

A popular excursion destination for Emerald Cruises guests, Wertheim Castle is a short hike from the Rhine. The picturesque 12th-century castle sits protectively above the small, quaint town of Wertheim. The town itself owns the castle, ensuring its upkeep is maintained and its authenticity is retained.

Guided tours through the castle are available to all visitors, with almost every part of the castle accessible. The palace and residential areas are particularly noteworthy, with the experienced guides taking you on a journey through the history of the castle and the ancient town of Wertheim. 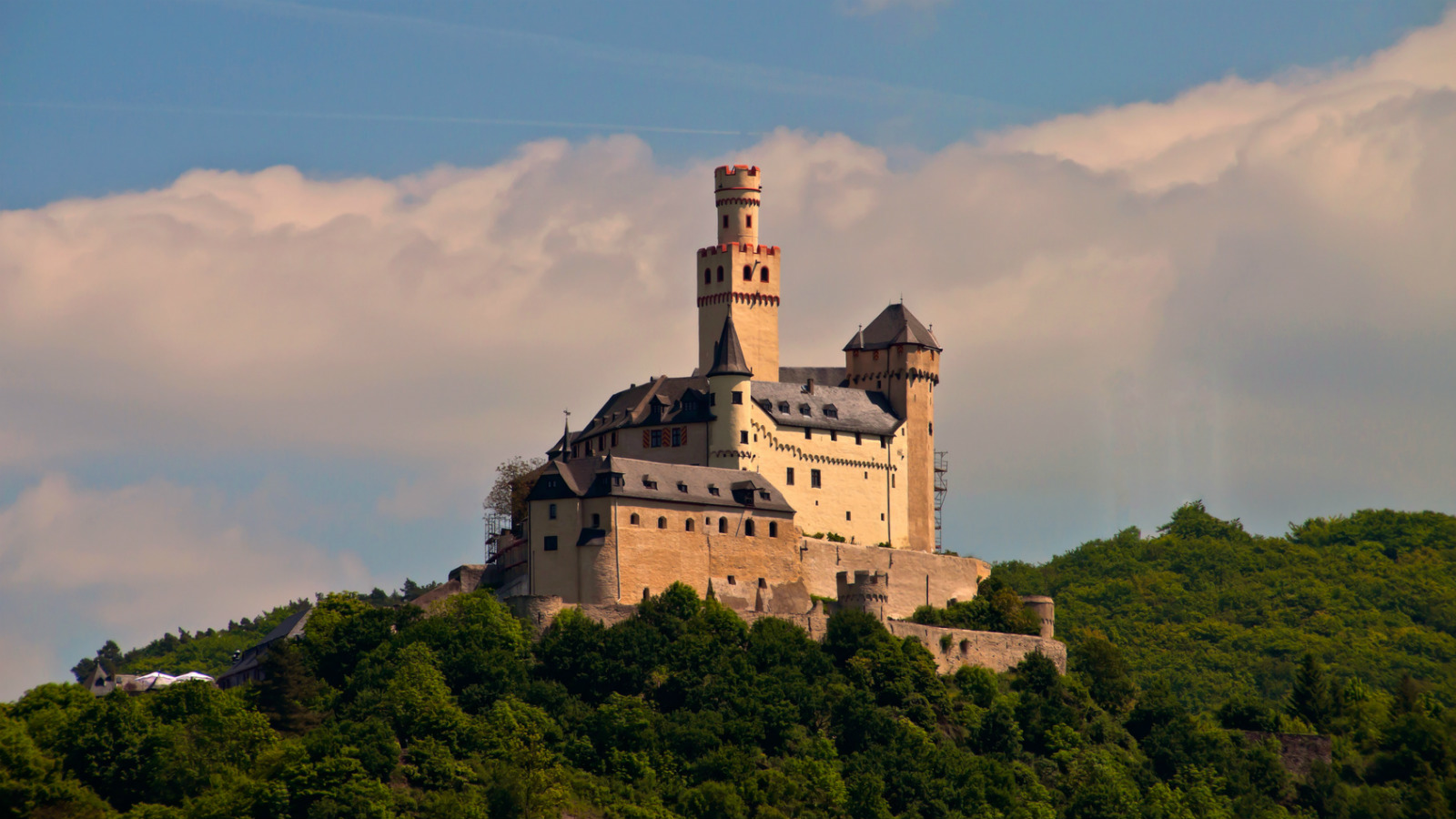 Wonderfully maintained inside and out, Marksburg Castle boasts a selection of typical interiors including the castle kitchen, knight’s hall, armoury, and even an inviting wine cellar. The attractive light-stoned walls of the castle are protected by an outer fortress.

With a single tower peering over the turrets and castle walls, Marksburg Castle takes on the appearance of a fairy-tale monument, not unlike something found in a story from Brothers Grimm. If visiting Marksburg Castle on foot, be sure to spend some time in the beautiful, small city of Braubach, which sits in the shadow of the protective castle.

Sterrenberg Castle and Liebenstein Castle are neighbouring forts sharing a mixed and sometimes turbulent history. The so-called Hostile Brothers are thought to have been the subjects of heated ownership disputes – with the first on record dating back to 1587. Legends and tales have emerged from these historic disputes, providing the two castles with plenty of mystique and stories to tell.

Legend has it that a knight, Werner of Sterrenberg, and his two young sons lived in Sterrenberg Castle. The brothers, Henry and Konrad, were amicable for a period until a young woman named Angela moved in with them. Both brothers developed feelings for her, creating a feud which lasted for years and resulted in their father having to build a second castle, Liebenstein, so each of the brothers could live apart and in peace. In the end, neither brother married Angela – she instead took the veil and became a nun. 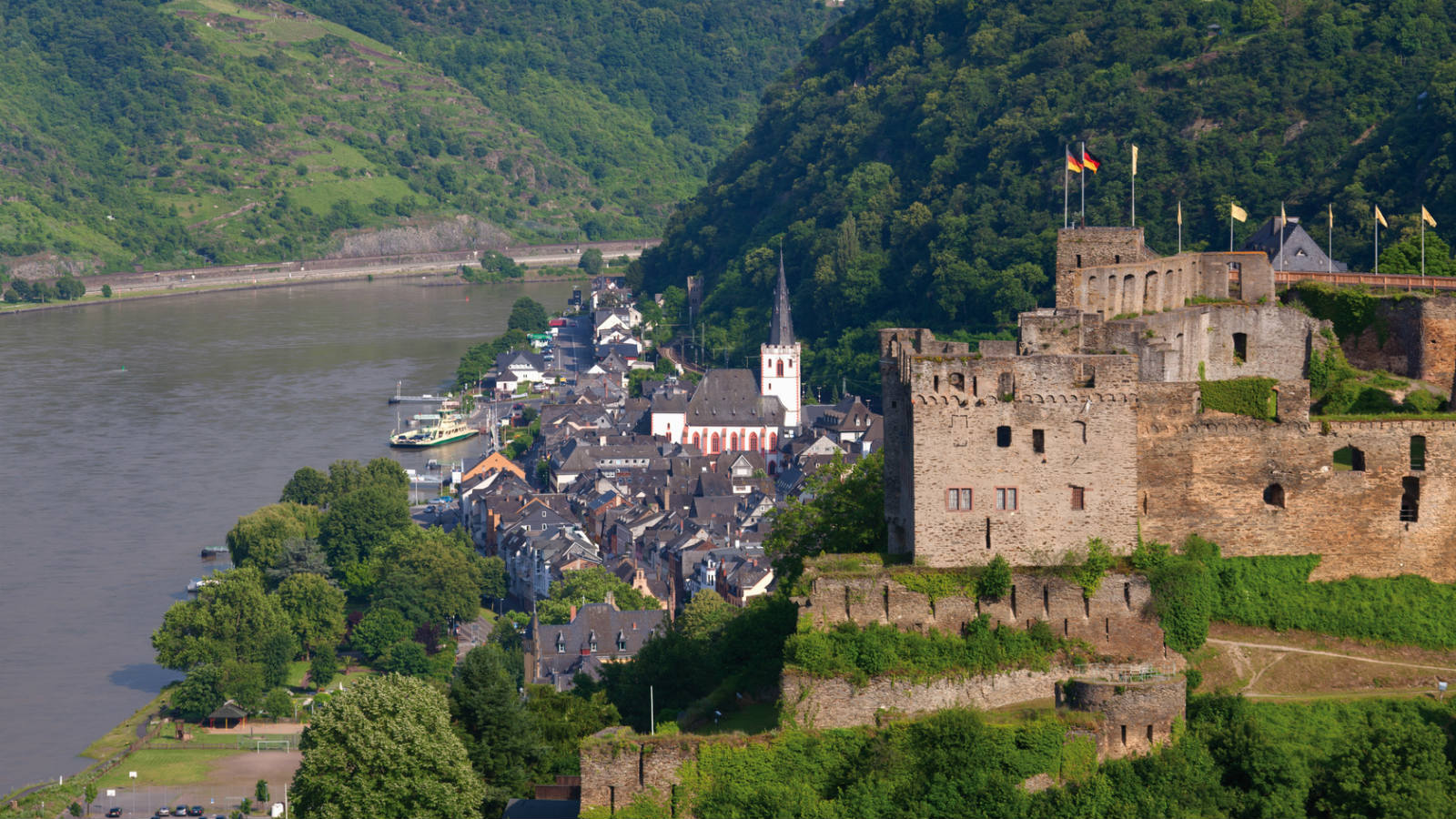 The charmingly nicknamed Katz (cat) and Maus (mouse) castles are so-called because the local people thought the two structures appeared to spy on each other in a similar fashion to the feuding animals.

Maus Castle (real name Thurnberg) was built by the Archbishop Balduin in the late 14th century to protect the local land which he had acquired at the time. Katz Castle was built during the same period, to protect the Rheinfels Castle located over the water. In fact, Katz Castle and Rheinfels Castle formed a barrier used to extract the Rhine toll from passing ships. It was partly due to this that the two castles became major targets for invading armies, with both structures besieged and demolished several times.

Whilst Maus Castle is still open to the public (and is a spectacular place for a wedding), Katz Castle has been privately owned since the 1980s, operating as a hotel. So if you want to check out its interiors, you’ll have to book a room.

Popular with visitors thanks to its very classical appearance, Sooneck Castle is thought to trace its history back to the 11th century – although the current structure was mostly built as a hunting seat in the 1800s. The interiors, designed by renowned Prussian architect, Schnitzler, are extensive and magnificently ornate. Providing an insight into the lives of 19th-century German nobility, the castle’s towers boasts an impressive roster of wonderful paintings and unique furnishings.

And if you find your way up to the top of the tower, you’ll be afforded some truly stunning views of the surrounding villages.

The neo-Gothic Reichenstein Castle is a reconstructed structure with roots dating back to the 11th century. Originally owned by a robber-baron (German lords who would charge expensive, and often illegal, toll fees), the castle was destroyed and rebuilt numerous times in its early years before going into disrepair in the 16th century. It wasn’t until midway through the 19th century when reconstruction work started, when the neo-Gothic flourishes and finishes were added.

Now a museum, the castle is home to an impressive array of cast-iron plates, hunting trophies, weapons, arms, porcelain and furniture from throughout the last 500 years. 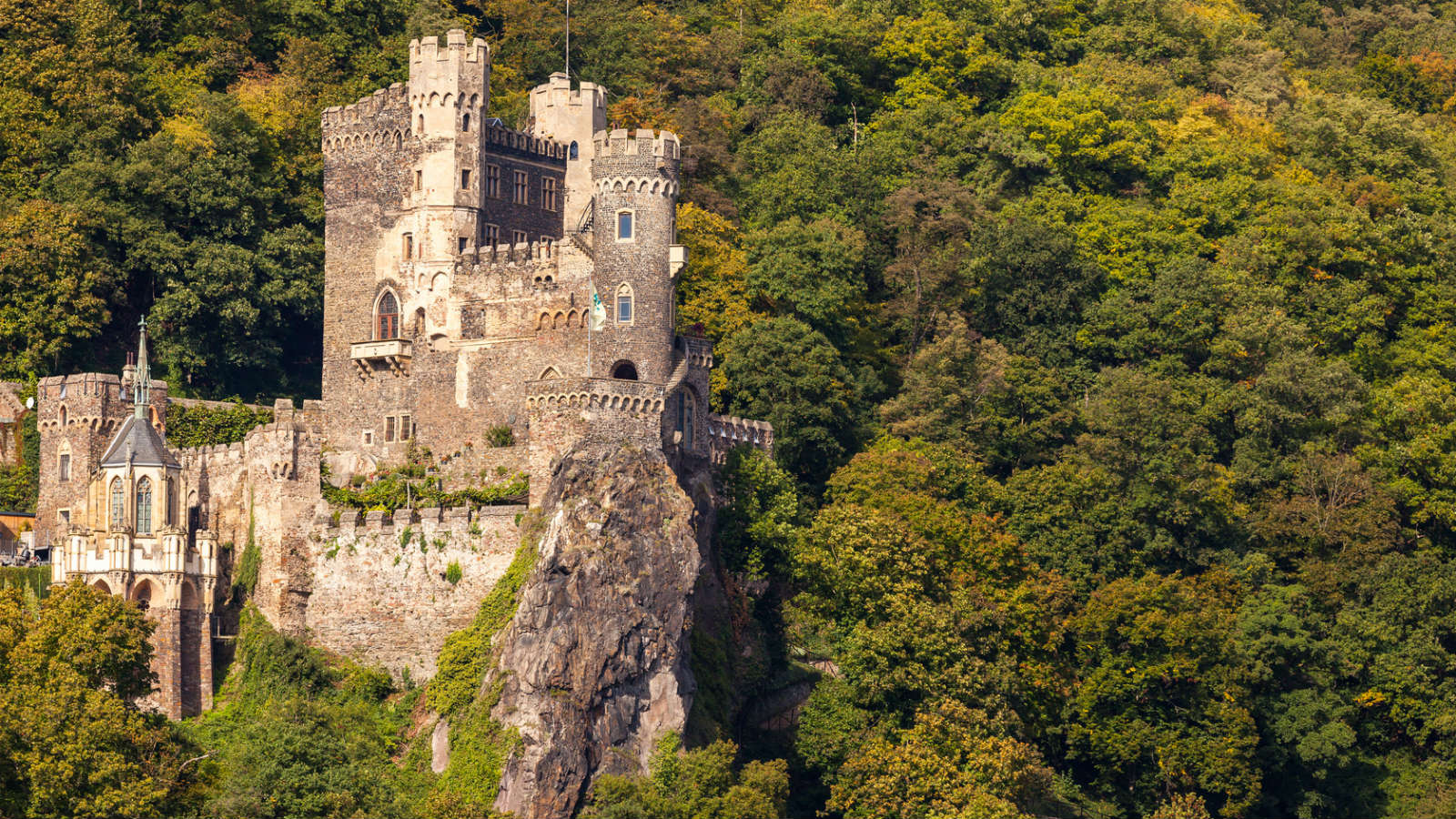 Despite the wealth of castles overlooking the Rhine, few can match Rheinstein Castle for sheer beauty and presence. Perched on a steep rock, the castle grows from the valley landscape, and is rich with romantic touches. Dating back to the 14th century, the castle was originally a summer residence for young princes - providing staggering views across the powerful waterways, and access to rich hunting grounds.

Today, the castle is one of the most popular visitor sites on the Rhine thanks to the extravagant collection of stained glass windows and mural paintings. Time your visit right, and you may be lucky enough to catch a round of medieval games – giving an authentic insight into Germany’s ancient history.

If you’d like to visit the beautiful castles, forts and structures of the Rhine, a river cruise offers idyllic passage. At Emerald Cruises we organise a selection of incredible cruise itineraries on the Rhine – for more information visit our Rhine River Cruises page, or call us today on 855 444 0161.