Discover the Main in Five Recipes

Germany is renowned for its simple and robust dishes, many of which originate from beyond its borders. Austria, Hungary, Italy and France have all helped to shape traditional German cuisine as we know it today, giving the country some of the most distinctly European food on the continent.

That’s not to say Germany doesn’t have its own foodie identity, however. Across the country, chefs continue to innovate and rework traditional dishes, lending each a unique German flavour. And nowhere is this Germanic influence more keenly felt than Bavaria, where the Main River flows through historic towns and cities whose gourmet offering delivers a true taste of traditional German fare.

Sampling local food is one of the highlights of exploring the rivers of Europe, with each region’s favoured food revealing much about its culture and heritage. So, today, we’ll be exploring five dishes of the Main River which have come to typify the quality and character of German cuisine, providing recipes for you to recreate each dish at home.

Germany’s love affair with meat has endured for over a century, with many of the nation’s favourite dishes containing pork, beef or veal. Rouladen is a typical German meat dish whose origins, like so much of the country’s food, are rooted in peasant cooking, with the thin cuts of meat used in the recipe being relatively cheap to buy in the 19th and early 20th century. 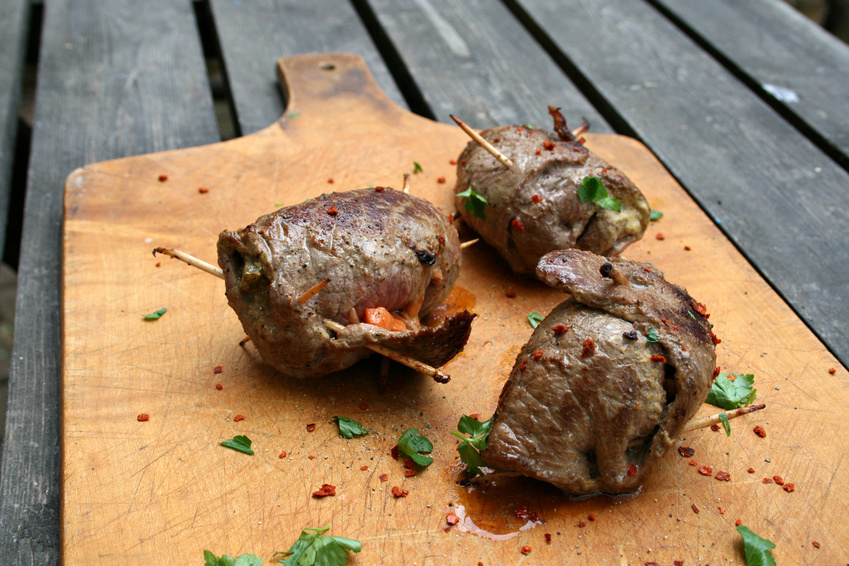 The dish itself is created by wrapping thinly sliced meats like veal, pork or beef around a filling of bacon, pickles, chopped onions and mustard, before braising in a meaty broth. Germans like to serve rouladen with dumplings, gravy, mashed potato and blaukraut (cooked red cabbage), and the dish is often eaten at family meals or on special occasions.

Keen to recreate this dish at home? Here’s how it’s made.

Step One: Pound each strip of chuck steak down to a thickness of roughly half a centimetre, then spread a thin layer of mustard onto each strip. Season with salt and pepper, before adding a strip or two of bacon, or the correct amount so that the bacon doesn’t stick over the side of the chuck steak strip. Top with a thin layer of chopped onions.

Step Two: Roll the meat into a tight cylinder, so the contents are kept firmly within the chuck steak strip. Then, use kitchen twine (or simple cotton thread) to tie each roll tightly. Repeat until you have used up all of the ingredients and have a selection of identical rouladen rolls.

Step Three: Heat the oil in a heavy sauté pan and add the rouladen rolls. Brown each roll until it’s dark on every side; this should take around 20 minutes. Once browned, place the rouladen into a large Dutch oven style pan.

Step Four: In a separate pan, bring 2 cups of water to the boil and pour this into the sauté pan you used to brown the rouladen, to collect the drippings. Pour onto the meat in the Dutch oven (enough to cover 2/3 of the rouladen), and simmer on low for 1½ hours.

Step 5: Remove the rouladen rolls from the pan and set aside. Whisk together ¼ cup of flour and ¼ cup of water until smooth and creamlike. Add this to the juices in the Dutch oven, stir and season. Simmer until bubbling and pour over the rouladen rolls, serving the dish with dumplings and your choice of seasonal vegetables.

Germany’s answer to Italian pasta; käsespätzle is a soft egg noodle dish which is considered a weekly staple in homes across the country, particularly in the Baden-Württemberg region. Though variations of käsespätzle exist in neighbouring countries, Germany has adopted it as one of its ‘family favourite’ recipes, and the dish is commonly enjoyed alongside cheese, roasted onions, or as accompaniment to a dish such as rouladen. 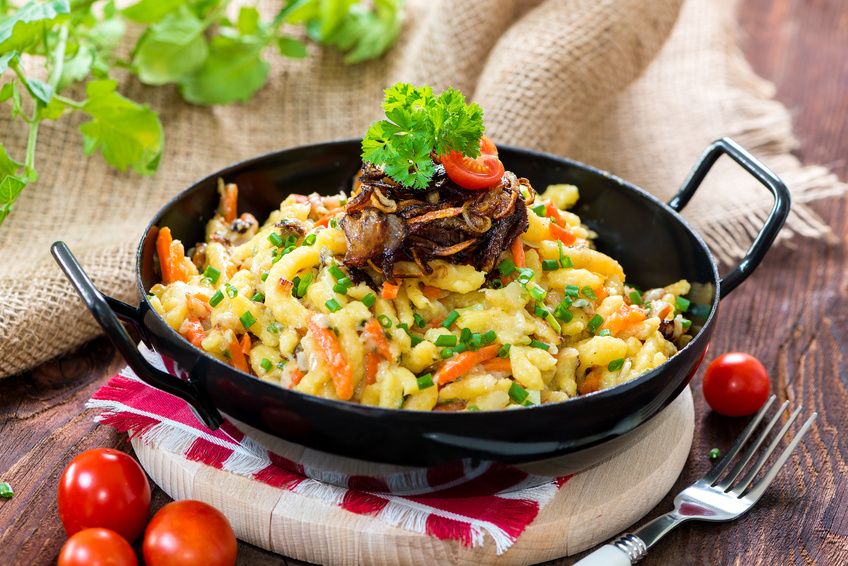 Step 1: Sift the flour, nutmeg, salt and pepper together in a bowl. In a separate bowl, beat the eggs. Slowly add the flour mixture to the eggs until smooth. Leave to stand for 30 minutes.

Step 2: Bring a large pan of salted water to the boil. Using a colander or cheese grater, press the batter directly into the boiling water. When the mixture has floated to the top, it is cooked. Remove with a slotted spoon, place in a bowl and mix in the cheese.

Step 3: Melt the butter in a large frying pan over a medium heat. Fry the chopped onion until soft and golden. Add the spätzle and stir until the onion is mixed in. Serve immediately on its own or as a side dish.

On account of Germany’s often bitter winters, the country is renowned for its stews, which prove the perfect way to warm up on a cold day. One of the most popular stews in Bavaria and the Main-land is eintopf, a steaming thick broth whose name literally translates as ‘one pot’. Regional variations of eintopf differ in their ingredients, but they all contain a mixture of seasonal vegetables and chunks of soft meat, particularly pork, beef or chicken. 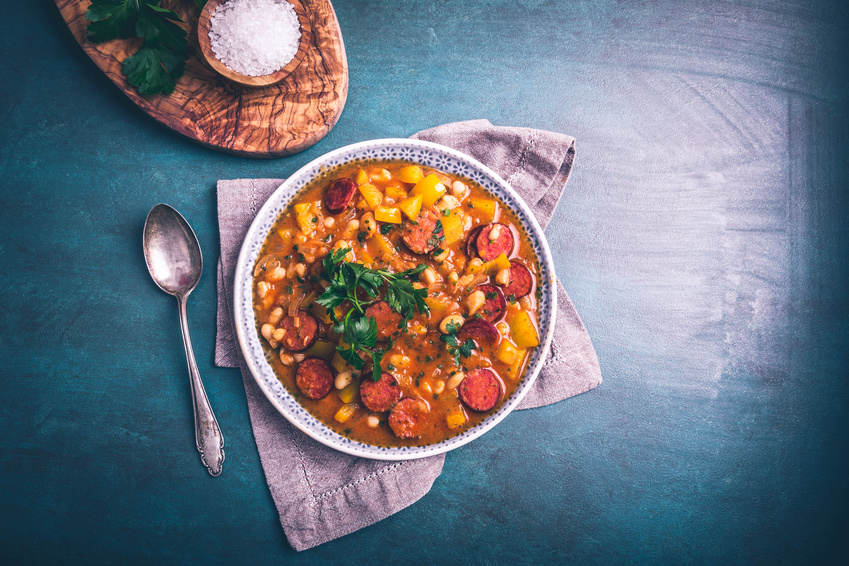 Eintopf is one of Germany’s most accessible recipes, with different variations available to suit all tastes. Most of the ingredients can be swapped out for other alternatives, and the dish can easily be altered for vegetarians. The recipe we’ve chosen is a classic Grünkohleintopf, and incorporates kale and smoked sausage.

Step 1: Bring a large pan of salted water to the boil. Add the kale and blanch for 1-2 minutes. Using a colander, drain the kale well before chopping coarsely on a board.

Step 2: Heat the oil in a large frying pan and add the onions, frying until soft and translucent. Add the kale followed by 2 cups of water. Stir in the oats and bring the mixture to a boil, before leaving to simmer for 30 minutes.

Step 3: Add the pork loin and sausage to the pan and cook over a low heat for a further 30 minutes; you may need to add a cup or two more water if necessary. Season the mixture with salt, pepper and nutmeg to taste. Serve with mashed potato and seasonal vegetables.

You’d be hard-pressed to visit any of the towns and cities of the Main River without spotting a rack of freshly-baked brezels, alluringly placed outside the local bäckerei (bakery). Brezels are soft white pretzels made from a simple mix of flour, water and yeast, and often sprinkled with rock salt. These savoury snacks are Germany’s answer to the croissant, and are regularly eaten by locals as they travel to work in the morning. 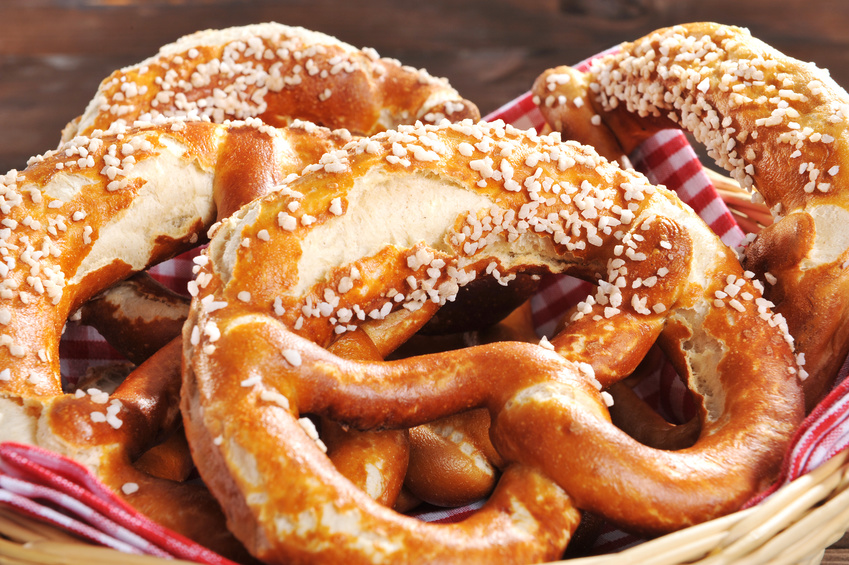 Laugenbrezel is the most popular type of brezel in the Main region, and one of the most traditional forms of the classic German pretzel. Chewy like a bagel and delicious served with soft butter, laugenbrezel are the perfect accompaniment to a cold German pilsner beer.

Step 1: Preheat the oven to 250°C. In a mixing bowl, stir together the syrup, yeast and 1½ cups of warm water, and leave to stand for around 10 minutes until the mixture becomes foamy. Add the butter, flour and salt and mix together until the dough begins to form, before transferring to a lightly floured surface for rolling.

Step 2: Knead the dough for around 8 minutes, until smooth and elastic. Split the dough in half, and roll each section into a rope around 4 feet long and 1 inch thick. Cover a large oven tray with baking parchment and transfer the first rope on to it. Keeping the centre of the rope on the tray, pick up both ends and cross one over the other about 2 inches from the end, before twisting towards the centre. Attach the twist to the centre of the rope which is still on the tray to create the brezel shape. Repeat with the second rope.

Step 3: In a pan, add the baking soda to 1 cup of water and bring to the boil. Brush a generous layer of the baking soda on to each of the brezels, before sprinkling with rock salt. Using a sharp knife, make a 6-inch cut in each brezel along the base. Bake the brezels for 15 minutes or until dark brown in colour. Set aside to cool for 10 minutes before serving warm with butter and a bottle of your favourite German pilsner.

Like many countries on the continent, Germany has a penchant for all things sweet, and this is a love shared on the banks of the Main River and across Bavaria. While rich chocolate desserts and vast cakes are often the order of the day in Germany, there are other desserts which offer a lighter way to finish off a three-course feast — the rote grütze being one of them. 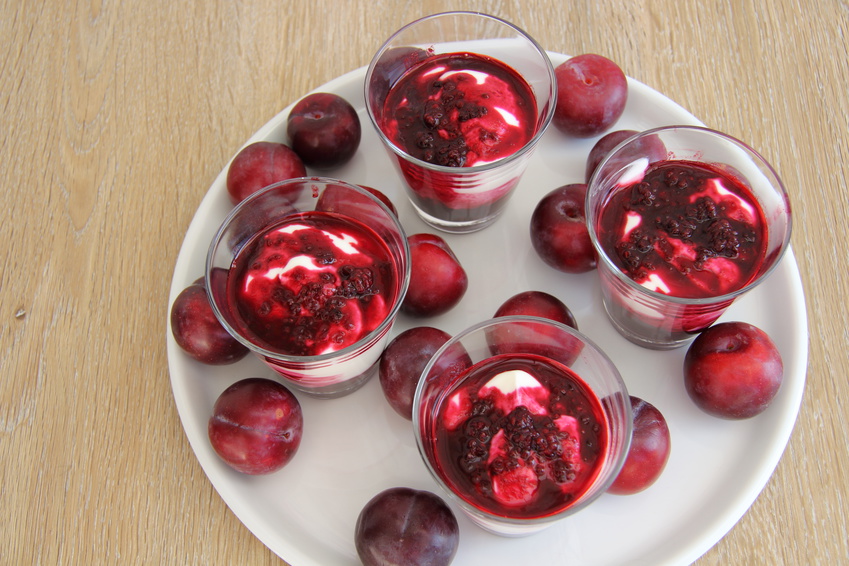 Rote grütze is a classic red fruit pudding whose origins stem from northern Germany. The dish has since become a favourite across the country however, with many families preparing this simple recipe to serve after a meal. The dish comprises black and red currants, raspberries and cherries, as well as corn starch or cornflour, and is delicious served with vanilla ice cream or double cream.

Step 1: Wash and prepare the fruits, adding granulated sugar to sweeten any sour cherries or currants. Add the fruit to a large saucepan with 3 cups of water and cook over a low heat until the fruit is tender.

Step 2: Line a colander with cheesecloth and place over a large bowl. Pour the fruit into the colander and leave to strain through, taking care not to squash the fruit. Once the juice has strained through, place the fruit in a large dish .

Step 3: Add a little water to the fruit and mix together. Place the mixture in a large pan and bring to the boil over a medium heat. In a separate bowl, mix the cornflour with cold water until smooth and add to the fruit sauce to thicken. Sweeten again if required, before pouring the fruit sauce over the fruit. Refrigerate, before serving with ice cream or double cream.

While we heartily encourage you to try these recipes for yourself, there’s nothing better than sampling these local dishes in their country of origin. Join Emerald Cruises for a luxury river cruise on the Main River, and you’ll enjoy authentic German cuisine every day of the journey. For more information, visit the homepage or call us on 855 444 0161.