Discover the Douro in Five Recipes

The Douro River weaves through the fertile landscapes of Portugal’s mountainous north, passing towns and villages untouched by the passage of time. Here, local people stay true to a traditional way of life, and one that values an authentic and time-honoured approach to regional cuisine.

Port wine may be the greatest export of the Douro Valley, but the locals treasure their food, too. This rural region is rich with provincial farmsteads offering fresh produce at the roadside, and many people rely on these farmers, shepherds and artisans to enjoy fresh, local food each day.

As well as these regional producers, the native cuisine of the Douro is still heavily influenced by the Atlantic Ocean. In fishing villages like Afurada and Angeiras, local fisherman can still be seen gathering their day’s catch, with hauls of sardines, mackerel, tuna, hake and bacalhau (cod) making their way to the food and produce markets of Porto and Regua.

Here at Emerald Cruises, we believe a region’s culinary legacy can reveal lots about its culture, traditions and way of life. We also know that, for many of our guests, sampling local food is one of the great joys of a luxury river cruise. So, with this in mind, here we take a tour of the Douro in five delicious recipes — providing step-by-step instructions so you can recreate each dish at home.

Originating from the Beira Litoral Province of the Douro Valley in the 19th century, Chanfana is a Portuguese stew comprising of roasted goat, bacon, vegetables and typical Portuguese seasonings like paprika, bay leaves and ground black pepper. 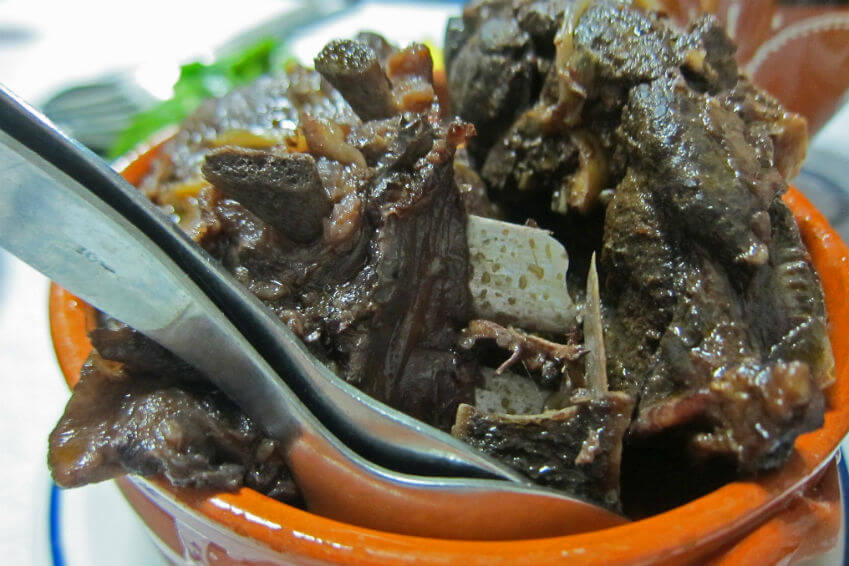 Legend has it, Chanfana was created during the French conquest of Portugal in 1810, when local people were forced to eat old goats after their livestock was pillaged by the invaders. To ensure the meat was tender, it was braised in a red wine broth with herbs, spices and vegetables for several hours before serving.

Today, Chanfana is enjoyed across Portugal but remains a typical dish of the Douro Valley, where it’s traditionally served in a clay pot from Olho Marinho. Our recipe follows the traditional version of the dish, but you can add or remove certain elements to suit your tastes.

Like many of Europe’s rural regions, the people of the Douro Valley historically relied on affordable, easy-to-prepare meals that required no specialist ingredients or equipment to cook and prepare. One such dish is the legendary Cozido à Portuguesa, a traditional stew which has existed since Roman times, and has become a staple of Portuguese home cookery from the Douro to the Tagus. 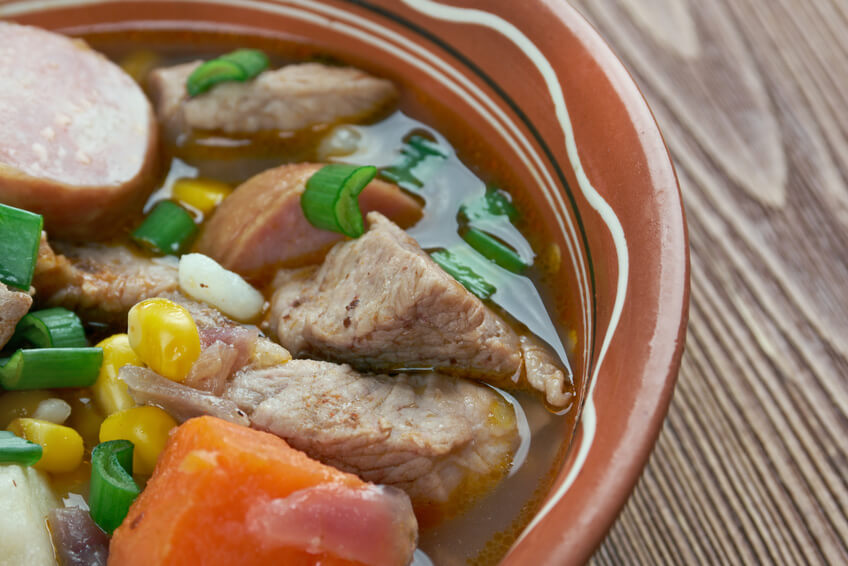 Traditionally, Cozido à Portuguesa was a peasant dish made using leftovers, scrap cuts of meat and any other ingredients people could get their hands on. Recently, however, the dish has experienced something of a renaissance, with top restaurants now serving their own version of this historic classic. A true ‘winter warmer’, Portuguese families often serve this dish during the colder months, when the temperatures drop on the Douro’s exposed mountainsides.

As a one-pot dish, Cozido is very simple to prepare and make, but requires a long cook time. Here’s how to prepare this regional favourite.

Before the Romans arrived on the Iberian Peninsula, the Douro Valley region was inhabited by small Suevian tribes, who hunted small game like rabbits, wild pigs and chicken. It’s from this era that Arroz de Cabidela originates — a rice-based chicken dish made using chicken blood, vinegar and black beer. 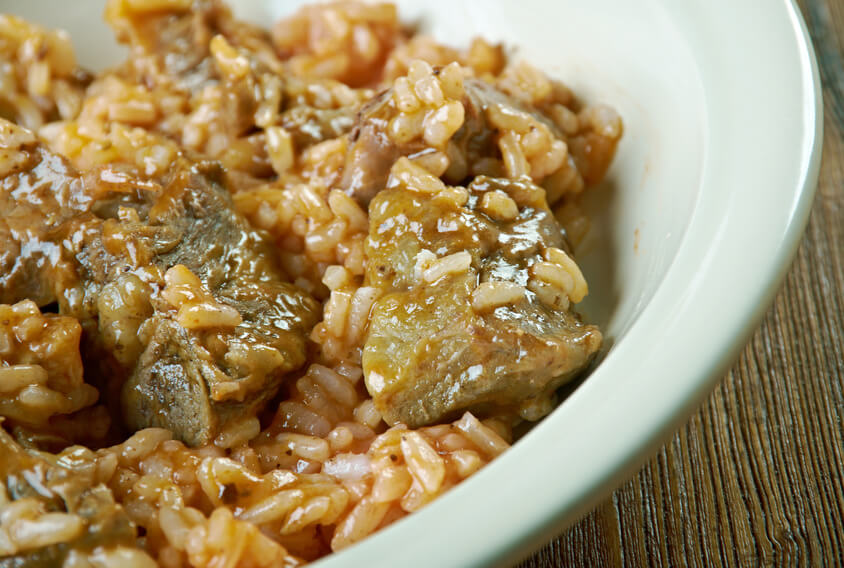 While Arroz de Cabidela may not sound all that appealing from the outset, this is one of the tastiest dishes to originate in northern Portugal, with the rich blood, balsamic vinegar and chorizo-flavoured sauce adding a depth and smokiness to the poultry. The dish is prevalently served in traditional Portuguese restaurants and tabernas, but is simple enough to make at home.

Salt cod, or bacalhau as it’s referred to in Portuguese, is a staple fish dish across Portugal, with many households tucking into this tasty delicacy two to four times a week. It’s said that over 1,000 recipes incorporate bacalhau, making this dried and salted cod dish one of the iconic ingredients of Portuguese cookery. 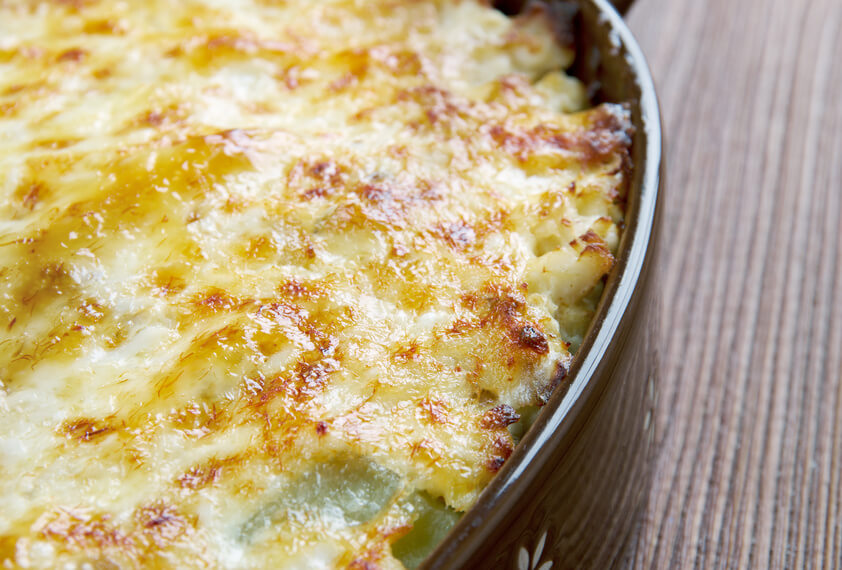 Salt cod has been produced for over 500 years, with Portugal being one of the first countries to perfect the technique for curing the fish to preserve it and retain its flavour and nutrients. By the 1700s, the ingredient was so popular and prevalent that it had become a staple dish for Portugal’s ordinary people and not just the upper gentry — something which was unheard of in other parts of Europe where seafood was scarce.

While there are a huge variety of recipes containing salt cod, one of our favourites is Bacalhau Com Natas, a creamy cod bake that’s delicious served alongside seasonal greens.

For the béchamel topping:

Wherever you travel in Portugal, you’ll never be far from an authentic Padarias (bakery) serving up delicious, just-baked Pasteis de Nata. These moreish egg custard tarts are a staple snack for sweet-tooths across the country, and are often prepared in huge numbers — with the Antiga Confeitaria de Belém bakery in Lisbon said to turn out over 10,000 of these flaky delicacies every day. 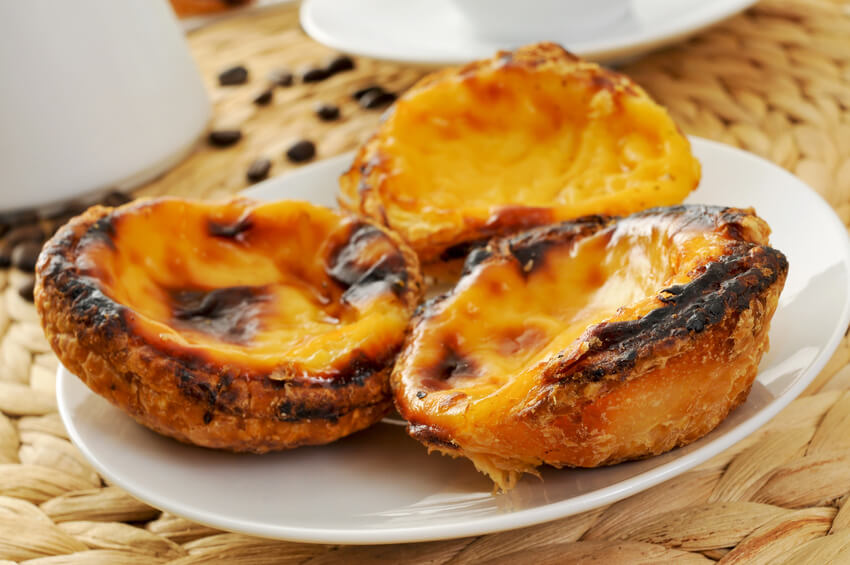 Pasteis de Nata tarts were first produced by the monks of Jerónimos Monastery in Lisbon in the 18th century, but have since spread across the country. In Porto, the capital of the Douro region, these delightful tarts can be sampled at several renowned bakeries across the city, including the Confeitaria do Bolhao and Padeirinha Doce.

If you fancy giving them a go at home, the recipe can be quite complicated, but it’s well worth the effort if you’ve fallen in love with the taste and texture of these typically Portuguese sweet treats.

Have these delicious recipes inspired you to visit beautiful Portugal and experience the delightful fare for yourself? Take a look at our collection of luxury Douro river cruises or call us on 855 444 0161 to start planning your dream trip to northern Portugal today.