Discover the Danube in Five Recipes

Making its way from the Black Forest in southwestern Germany and all the way into the Black Sea, the Danube River touches many of Europe's most fascinating cultures and traditions. Passing through nine different countries, this legendary waterway serves as an inspiring pathway for the modern-day traveller. While its banks are home to some of Europe's most magnificent landmarks and beautiful countryside that are sure to inspire your travels, you may find that it's the Danube's diverse and delectable cuisines that becomes a highlight of your European getaway.

One of the absolute joys of exploring Europe is experiencing the local delicacies and famed culinary creations that are intimately connected to the timeless cultures throughout. Delicious dishes using time-honoured techniques and regional flavours give as good an insight into local life as a museum – all whilst pleasing and surprising the palate.

From Budapest to Bavaria, we’ve found some truly wonderful delicacies on the banks of the Danube in some of our favourite destinations. To help inspire your future escape into the heart of Europe, here are five delicious recipes that you can enjoy before you cruise! Originating in Hungary over 1,000 years ago, this hearty and rich stew has become a quintessential dish throughout Central Europe. The name, goulash, actually derives from the Hungarian word for herdsman or cowboy, so it should come as no surprise that this dish is traditionally made with beef, veal, pork or lamb and a variety of vegetables. Paprika, which is now the national spice of Hungary, has been a staple in Hungarian goulash since it arrived in the country in the 16th century and can be found in much of the cuisine throughout the country and its stunning capital. Many more recent additions have evolved goulash recipes, such as tomatoes – which many people now consider a staple. However, throw tomatoes into an authentic goulash and you risk upsetting the locals.
Here’s a recipe for a far more traditional Hungarian goulash.

Step One: Melt butter in a large pot at a medium-high heat.

Step Two: Sauté onions until soft and then add the beef, sauté until brown.

Step Four: Add the water, turn the heat to low and simmer for 2 hours, 30 minutes.

Step Five: Add potatoes and simmer for another hour. Season with salt and pepper, then serve. Not too far along the Danube from Budapest, whet your palate with one of Austria's most renowned sweets, Sachertorte. With marvellously regal beginnings, the story of this delectable chocolate cake begins in 1832 in Austria’s romantic capital, Vienna. Franz Sacher was a 16-year-old kitchen apprentice working for royalty and diplomats when Austria’s minister of foreign affairs, Prince Metternich, demanded a special dessert to finish a meal he was hosting for high-ranking officials. Sacher’s master, the head chef of Metternich’s household, was unfortunately ill, leaving his teenage protégé in charge.

On that fateful day, Sacher created the now-eponymous chocolate torte, which was said to have absolutely delighted Metternich’s guests and, potentially, spared a diplomatic nightmare. Sacher's son, Eduard, continued his father's legacy, serving the delightful chocolate dessert at the Demel bakery, then the Hotel Sacher, turning the Sachertorte into one of Vienna’s culinary treasures.

For the topping & icing

Step One: After pre-heating the oven to 180 degrees Celsius, grease a deep 23cm round cake tin and line the base, using grease-proof paper.

Step Two: Break the chocolate into small pieces and slowly melt them over a pan of hot water. Stir the chocolate occasionally, then allow to cool slightly.

Step Three: Beat the butter in a bowl until very soft, then gradually beat in the sugar until the mixture becomes light and fluffy.

Step Four: Add the chocolate and vanilla extract to the butter and sugar mixture, then beat again.

Step Five: Add the egg yolks to the mixture, then fold in the ground almonds and sieved flour.

Step Six: In a separate bowl, whisk the egg whites until stiff. Make sure the egg whites don’t dry out and then add one-third to the chocolate mixture and stir vigorously. Then gently fold in the remaining egg whites.

Step Seven: Pour the mixture into the tin, level out and bake for 50 minutes. The cake should spring back when pressed.

Step Eight: Leave to cool in the tin for a few minutes, then remove from the tin and paper before leaving to cool on a wire rack.

Step Nine: Make the topping by heating apricot jam in a small pan, before brushing evenly over the top and sides of the cooled cake, and allow to set.

Step Ten: Make the icing by heating the cream until piping hot. Remove the cream from the heat and break plain chocolate up, adding into the cream. Stir until the chocolate has melted and then cool. Spread gently over the cake, then leave to cool.

Step Eleven: For the Viennese effect, make a little extra icing and pipe the word ‘Sacher’ across the top of the cake. 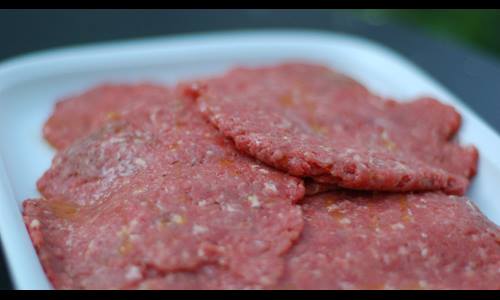 A staple of Serbian street food, pljeskavica can be found served all over the city of Belgrade. Sometimes called a Balkan burger due to its popularity throughout the region, real pljeskavica is a spiced patty made of a mixture of ground pork, beef and/or lamb. It can be served in a flatbread bun or, as traditionalists would prefer, on a plate with onions, milk cream, relish and a spicy cheese salad. Pljeskavica is far from the most sophisticated culinary treat to be found on the Danube, but it's a piece of real old-fashioned rural cooking which has been delighting Serbians for generations.

Enjoy this supersized burger as you explore Serbia's ancient capital; or if you can’t wait, follow this recipe here.

For the meat patties

For the burger assembly

Step One: Mix the ground beef, ground pork, salt, paprika, pepper and sparkling water in a bowl. Combine into a bowl and brush with olive oil.

Step Three: Add the onions to the meat mixture and divide into four balls, then pound into a flat patty.

Step Four: Grill or fry the patties for three to four minutes on each side. Assemble the patties inside flatbreads with the suggested toppings, or your own choices. 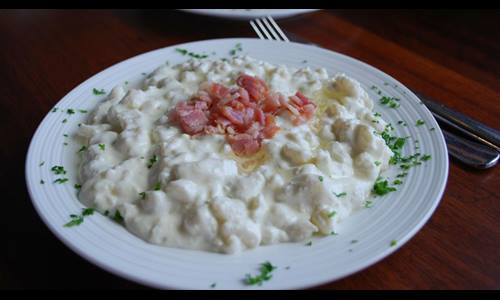 The national dish of Slovakia, bryndzové halušky combines boiled balls of potato dough (the halušky) with a soft sheep’s cheese (bryndza) to form a dish simmilar to Gnocchi. A delightfully hearty meal, bryndzové halušky is sometimes topped with fried bacon to offer a salty compromise to the tangy taste of the quintessentially Slovakian cheese. You'll also find it garnished with cabbage or eggs, or even served as a side dish to a meaty main. However you have it, bryndzové halušky is a wonderfully warming and humble treat to enjoy in Bratislava or at home.

Here is our recipe for making bryndzové halušky at home.

Step One: Grate the potatoes into a bowl, and mix with flour and salt until you get a thick, sticky dough.

Step Two: Chop the bacon into cubes and fry on low heat until crisp and brown.

Step Four: Bring a pot of water to the boil, and add one or two dumplings at a time. Cook the dumplings until they float to the top and change colour.

Step Five: Drain the cooked halušky in a colander, adding more dumplings until the entire batch is cooked.

Step Six: Let all the halušky drain for three minutes, the transfer to a large bowl and add the cream until evenly coated. 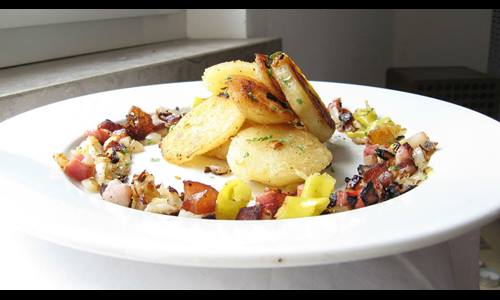 While enjoyed throughout all of Germany and much of Europe, knödel finds its roots specifically in the region of Bavaria. These savory German bread dumplings make for an amazing side dish to the Hungarian goulash mentioned above, appetizer to a dinner, or enjoyed on their own. Quick and easy to make at home, knödel gives you an authentic taste of Bavaria before you visit the historic region, and its many flavours, for yourself.

Although there are variations of knödel to be found throughout Europe and beyond (this dish is particularly popular in Brazil, where a large population of Germans settled and shared their culinary skills), the Bavarian version, such as the one shared here, is by far the most authentic.

Step One: Slice the rolls into ¼ inch thick slices, place in a large bowl and cover with the warm milk. Leave these to soak for 10 minutes.

Step Two: In a separate bowl, whisk the egg with the parsley, salt, pepper and nutmeg.

Step Three: Pour the egg mixture over the bread and milk, and knead together.

Step Four: Bring a pot of water to the boil.

Step Five: Roll the kneaded mixture into eight round balls, and place carefully into the boiling water. Simmer (not boil) the balls for 15 minutes.

Step Six: Carefully remove the dumplings from the water with a slotted spoon and serve with the stew, goulash, soup, casserole (or almost anything) of your choice.

Uncover the tastes of Europe with Emerald Cruises

Are you looking for an immersive getaway taking you through the historic sites, lush vineyards and traditional cuisines of Europe? Join as we follow the winding course of the Danube River – stopping in at the incredible cities featured above – for what will be an unforgettable river cruise experience.

Your Emerald Cruises Star-Ship will introduce you to the hidden gems, cultural wonders and timeless recipes which define this remarkable part of the world. Receive your complimentary brochure today and start looking forward to discovering the Danube for yourself.
Tags: cuisine europe food recipes