10 Photographs That Will Make You Want to Explore the Rhine

The great Rhine river twists through the beautiful landscapes of northern Europe, carving through six countries on its scenic journey from source to sea. This timeless passageway has had a profound influence on the regions and cultures on its banks, providing a vital trading route from Switzerland to the Netherlands for thousands of years.

Captivating cities and towns, as well as some of Europe’s finest scenic pockets, are beautifully orchestrated by the River Rhine. Basel and Cologne, Amsterdam and Heidelberg, the awe-inspiring natural spectacle of the Rhine Gorge; this extraordinary waterway will introduce you to some of the most iconic landmarks of the continent.

For those who have never had the pleasure of a Rhine river cruise, here we showcase the river’s highlights in 10 inspiring photographs. 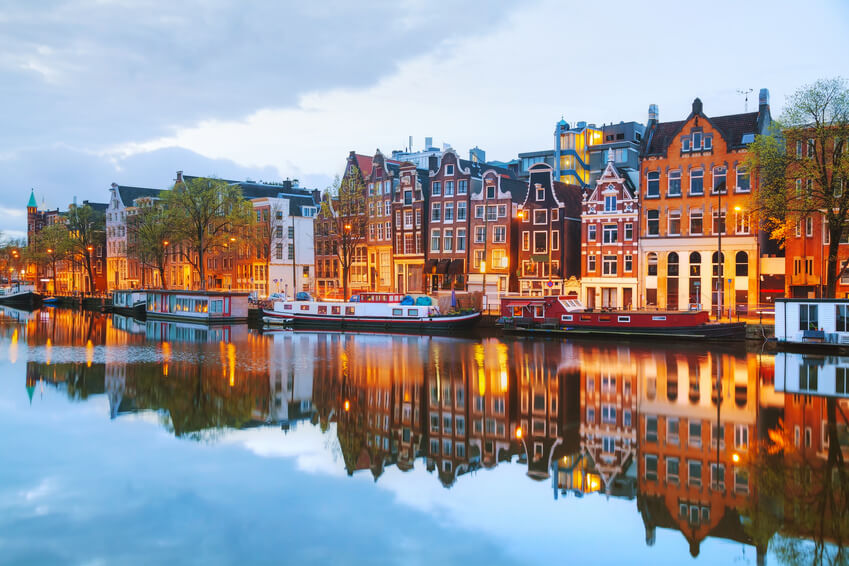 The Rhine Delta flows into the North Sea in the Netherlands, and it’s here where we begin our tour of some of the river’s wonderful highlights. Amsterdam, the ancient Dutch capital, is characterised by both its labyrinth of canals and its elegant architecture, as well as its extraordinary history and unique, progressive culture. The city itself offers up a treasure trove of culture and heritage, from the lauded Rijksmuseum and Anne Frank House to the Van Gogh Museum and the Portuguese Synagogue — giving you plenty to see and do. Of course, you could simply walk (or cycle) the city streets, taking in the historic gabled architecture and visiting beautiful areas like Jordaan, Vondelpark and De Pijp. 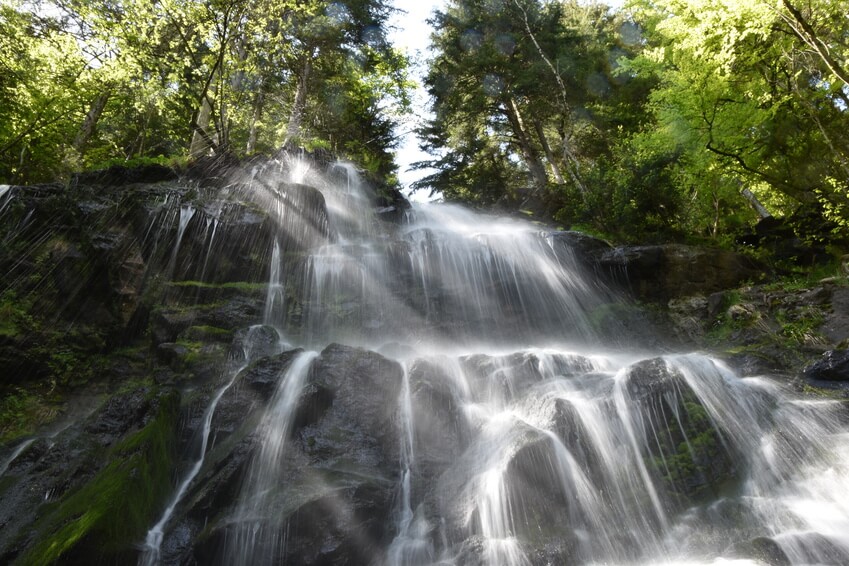 Inspiring poetry and fairy tales for centuries, the exquisite Black Forest of Germany is one of the great scenic highlights of the Rhineland. Wrapped in mystery and intrigue, this dense, sprawling woodland is dotted with unique villages and ancient castles — attributes which inspired the works of 19th-century German writing duo, the Brothers Grimm. Marvel at landscapes which inspired such folk tales as Sleeping Beauty, Rumpelstiltskin, Hansel and Gretel, and Snow White, and be transported back in time by Gothic towns and villages seemingly untouched by the passage of time. 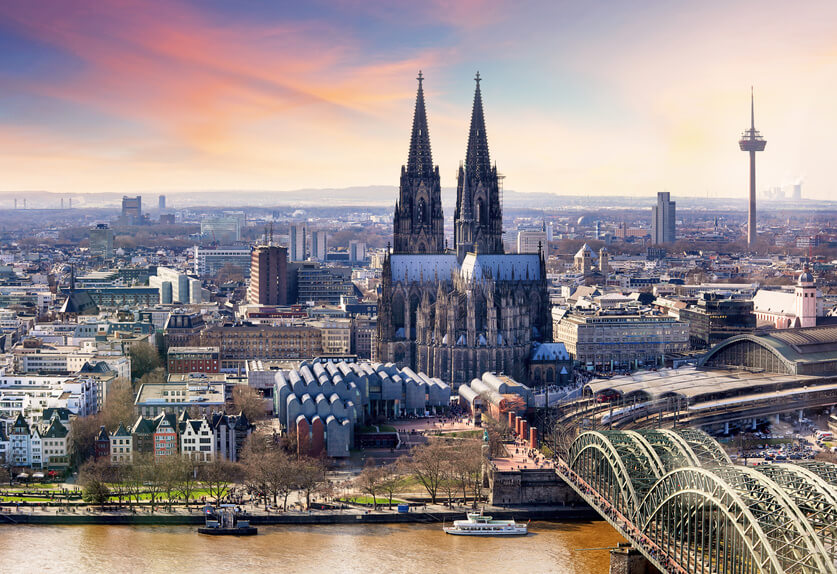 Melding the modern with the ancient, Cologne is one of Germany’s most striking cities, and flowing through its heart is the mighty Rhine. This ancient German city was all but destroyed during the WWII, with allied bombs laying waste to around 80% of the historic city centre. Thankfully, its staggering cathedral was spared from destruction, and today stands as the tallest twin-towered Gothic church in the world, with its ornate spires stretching up 157m in height. Cologne itself is a European centre for culture and the arts, boasting renowned heritage centres like the Museum Ludwig and the Imhoff-Schokoladenmuseum — the world’s largest dedicated chocolate museum. 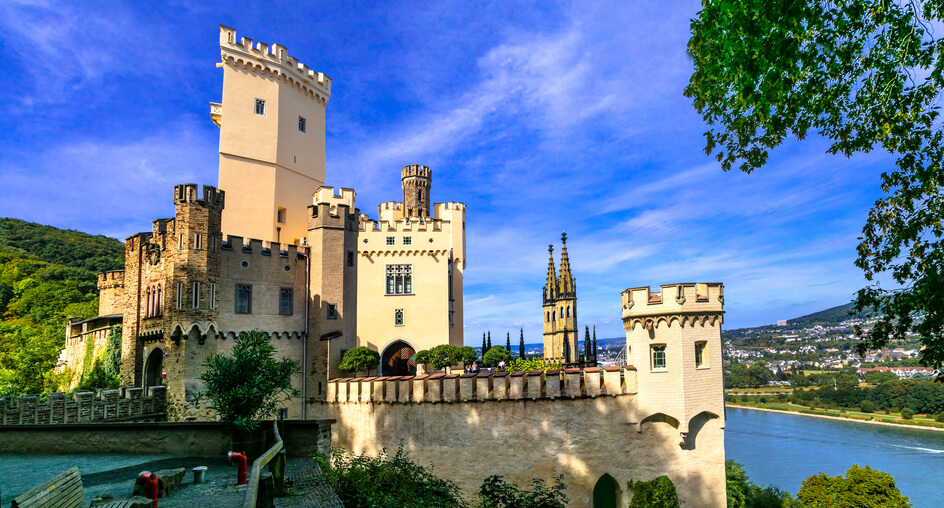 Ancient castles, keeps and fortresses pepper the Rhineland, each telling of the region’s winding, enchanting history. From your Emerald Cruises Star-Ship, you’ll be privy to vistas which showcase these medieval structures in all their splendour, including the imposing Stolzenfels Castle, which lies near the city of Koblenz on the left bank of the Rhine. This medieval fortress was originally built in the 13th century, and later regenerated to reflect the Gothic Revival style of the 1800s. Now as much a palace as a fortress, this outstanding castle is part of the UNESCO World Heritage Site Upper Middle Rhine Valley, a region highly-prized for its geological, historical and cultural significance. One of the great elegant cities of Switzerland, Basel sits at the exact point where the Swiss, French and German borders meet, with some of its suburbs lying in northern France. This beautiful old city stretches away from the waters of the Rhine, and has been an important commercial and cultural hub since the Renaissance. Now highly-regarded for its chemical and pharmaceutical industries, Basel is home to various internationally-renowned science, art and heritage museums, including the Kunstmuseum and the Foundation Beyeler. The city also boasts some true architectural gems, including Basel Minster and the Dollhouse Museum, which contains four floors dedicated to historic toy exhibits. The Rhine Gorge is a true river cruise must-see, providing scenic vistas of bewitching magnificence. Also known as the Upper Middle Rhine Valley, this spectacular river valley stretches for 40 miles between the German cities of Koblenz and Bingen, offering up some of Europe’s most beguiling panoramas. Enjoy a front-row seat as your ship drifts through this dramatic land, enjoying views which marry ancient castles with craggy, soaring cliff faces. The Gorge is also internationally-renowned for its viticulture, and you may notice that the sunniest slopes of the valley are strewn with grapevines used to produce the region’s most revered vintage, Riesling. 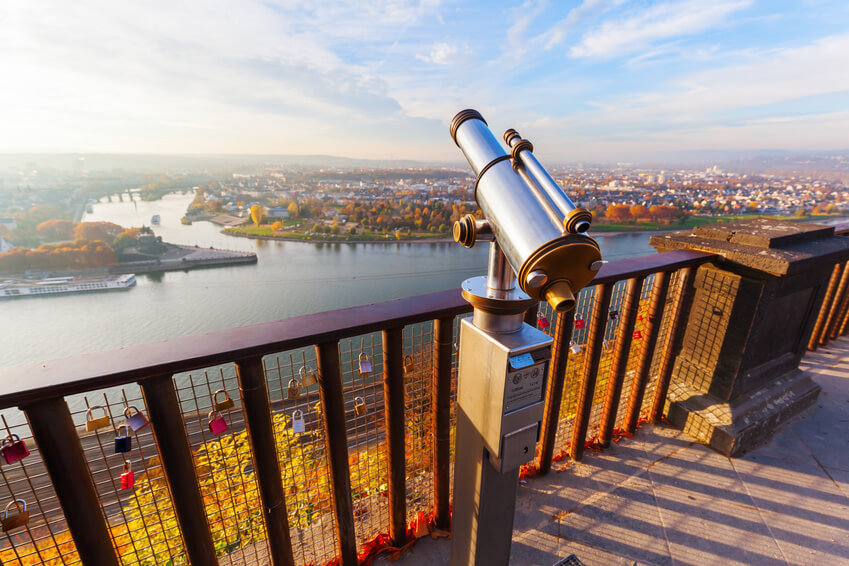 Lying at the confluence of the Rhine and Moselle rivers, the city of Koblenz is a historic treasure of the Rhineland, its streets offering up a charming array of architectural styles — from Baroque to medieval. In 55BC, Julius Caesar reached the site of Koblenz and built a bridge, joining the new city with the town of Andernach. From this point on, Koblenz became a vital trading link on the Rhine and Moselle rivers, expanding quickly to become one of the major river ports of the Rhineland. Today, Koblenz stands as one of Germany’s best-preserved fortified cities, with a string of defensive works which crown the hills surrounding the city. Sights to look out for in the city include the Basilica of St Castor, the Liebfrauenkirche and the Jesuit College, which showcases Baroque architecture at its finest. Take one look at the profile of Eltz Castle, and it’s easy to why the Rhineland so inspired folk stories and fairy tales. Situated close to the Moselle River and shrouded in dense pine forests, this medieval fortress has all the trappings of a storybook castle, from its Romanesque towers to its imposing archways and passages. Alongside the neighbouring Lissingen Castle, Eltz is the only castle on the left bank of the Rhineland-Palatinate that has never been destroyed, lending it a distinct, authentic and historic appeal. And, interestingly, the castle is owned not by one heir, but by several families, making it a rare example of a Ganerbenburg castle — one belonging to a community of joint heirs. 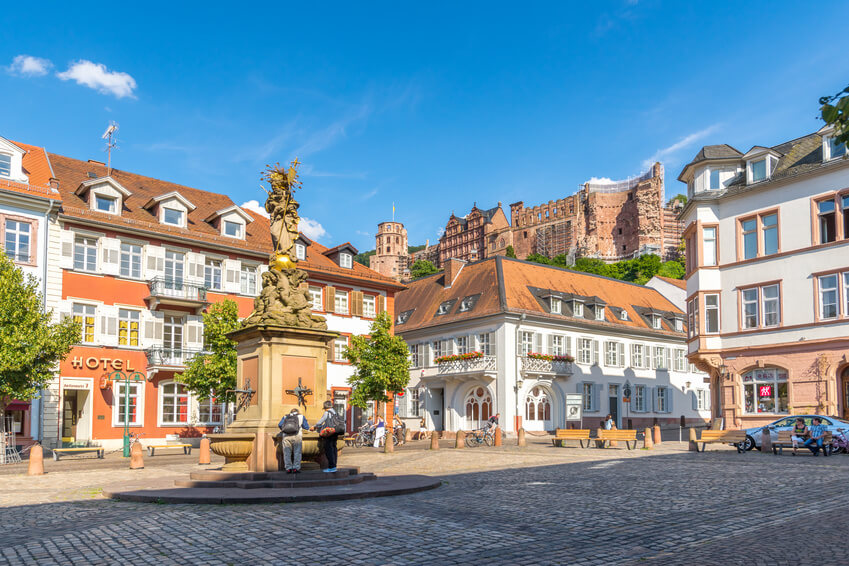 Wrapping around a bend in the Neckar river, a major right tributary of the Rhine, is the town of Heidelberg, a small city renowned for its historic university and spectacular Baroque and medieval architecture. From its exquisite ‘old town’ quarter to its spectacular neighbouring castle (the aptly named Heidelberg Castle), Heidelberg is steeped in heritage and boasts a distinct, laid-back culture which stems from the town’s large student population. Walk the beautiful streets of the Altstadt, taking in such sights as the old stone bridge and Church of the Holy Spirit, before visiting Heidelberg Castle, whose Renaissance façade is one of the most beautiful and best-preserved outside of Italy. The Rhine’s fleeting stint in northern France is incredibly memorable. This is all thanks to the river’s passage through the exquisite French city of Strasbourg, whose medieval cobbled streets and timber-framed almshouses provide a charming backdrop to a wonderful city tour. The city itself lies at the centre of the wine region of Alsace, so you can look forward to sampling the regional offering as you stroll leisurely through the historic streets of the city. One of Strasbourg’s most renowned districts is ‘Petit France’, an area internationally renowned for its delightful medieval architecture and pedestrianised, canal-side walkways.

If this tour of the Rhine’s picturesque highlights has left you longing to travel its waters, click here to view our full collection of luxury river cruises on the Rhine. Or, if you need any further help or advice, call the Emerald Cruises team today on 855 444 0161.