A Tour of Europe’s Michelin-Starred Cities

In 1900, brothers Édouard and André Michelin published a guide for French motorists, listing information that could prove useful to those travelling by motorcar. Over a century later, their humble driving manual has evolved to become one of the world’s most revered restaurant guidebooks, the prestigious Michelin Guide.

While the earliest editions of the Michelin Guide owed their existence to the car, the guidebook grew beyond the realms of motoring when, in 1926, a three-star award system was introduced, helping to classify some of the finest restaurants across Europe.

Due to the popularity of the guide, the acquisition or loss of a star had a dramatic influence on the success of those restaurants included, with the rating effectively capable of making or breaking an establishment. This led to the Michelin Guide becoming the high bar against which all restaurants wished to be judged — a legacy which continues to this day.

Attaining a Michelin star is one of the highest accolades a restaurant can achieve, and in cities across Europe, there remains a real appetite for dining in such exclusive eateries. The question is, in which cities of the continent might you find some of the world’s most iconic Michelin star award-winners?

Here, we enjoy a whistle-stop tour of Europe’s Michelin-starred restaurants — from Paris to Bruges. 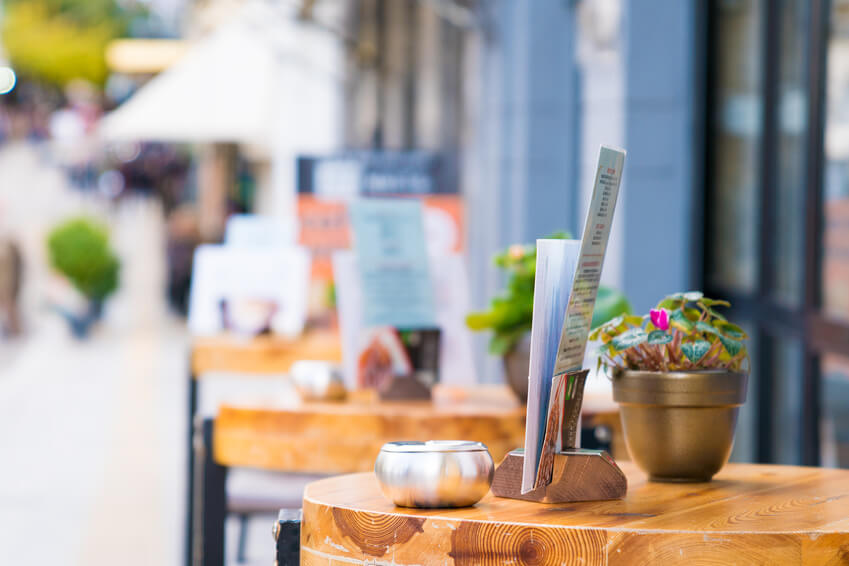 Paris has long been heralded as the world’s Michelin-starred capital, having racked up more of these priceless accolades than any other city since the guide was first introduced. Even today, Paris remains within the top three cities with the most Michelin-starred restaurants in the world — firmly establishing it as the gourmet capital of Europe.

Here, we showcase three restaurants with 1, 2 and 3 Michelin stars which promise an unforgettable dining experience during your visit to the city of light.

Bedecked in wood and stone, with an elegant skylight flooding the space with natural light; Saturne is a welcoming and tranquil eatery, with an open kitchen further enhancing the sense of space and transparency. This tastefully-hip Parisian restaurant is helmed by chef and sommelier duo Sven Chartier and Ewen Lemoigne, who place a special onus on selecting ingredients and wines which are organic and natural. Expect top-flight ingredients and a relaxed atmosphere in this loft-style eatery, as well as a relatively affordable final bill (€45 per head for set menu lunch).

Once graced by the likes of Audrey Hepburn, Salvador Dali and André Malraux, the reputation and legacy of restaurant Lasserre almost overshadows its culinary offering — but not quite. Veteran head chef, Christophe Moret, and expert pastry chef, Claire Heitzler, have crafted a menu of near-mythical quality and innovation, with each dish possessing a lip-smacking quality you’ll savour for a lifetime. The restaurant itself plays on its own nostalgia, with a bellboy-operated lift and retracting roof which can be opened on an evening to allow diners to catch a glimpse of the starry night’s sky. Bliss.

Le Bristol is one of Paris’ fabled ‘palace’ hotels, set on the elegant and exclusive rue du Faubourg St-Honoré, one of the city’s most esteemed and fashionable boulevards. The hotel itself is one of the most luxurious in the city, but it’s the adjoining restaurant which steals the show. Fronted by renowned head chef, Eric Fréchon, Le Bristol’s Epicure restaurant is a three-time Michelin star award-winner, and boasts one of the most exclusive and pioneering menus in France — perhaps Europe. Expect a sampling menu of indulgent eats, a celebrity clientele and of course, an unforgettable culinary experience. In 1934, celebrated foodie, Maurice Edmond Sailland, declared Lyon the world capital of gastronomy. This affectionate moniker came during the golden age of Lyonnaise cuisine, when the city was dotted with traditional Bouchon-style eateries, each serving wonderfully fresh and authentic local cuisine. Today, the so-called gourmet capital remains as fruitful as ever, with several prestigious restaurants still offering Lyonnais cuisine at its very finest.

With panoramic city views offering a unique aspect of Lyon’s awe-inspiring architecture, Têtedoie is a popular and accessible eatery which benefits from its position at the very top of Fourviére Hill. The restaurant takes its name from head chef, Christian Têtedoie, whose signature style incorporates contemporary flavours without straying far from French tradition. One of the best examples of classic Têtedoie cuisine is casseroled lobster and calf’s head cromesquis, which the Michelin Guide chose as their must-eat dish in this contemporary and exceptional restaurant.

Located in a unique position on an island in the middle of the Saône, the two Michelin star award-winning Auberge de I’lle Barbe combines gastronomy and history thanks to its wonderful 17th-century building. But while the history of the restaurant’s location does provide a cursory distraction, it’s the decadent fare on offer here which provides the biggest draw. The unique climate of the Saône (particularly its chilly winters), mean the chefs at Auberge de I’lle Barbe place a special emphasis on cold water shellfish, fatty poultry, truffles and foie gras, as well as game from the nearby woodlands.

Paul Bocuse has become one of France’s great culinary icons, and is widely considered to be one of the country’s greatest living chefs. His innovative approach to cuisine has earned him three Michelin stars, and his restaurant, the esteemed Auberge du Pont de Collonges, is one of Lyon’s most celebrated eateries. At 91, Bocuse no longer oversees the day-to-day running of his legendary restaurant, but his legacy remains in the form of an exquisite menu of contemporary Lyonnais eats, including crayfish in Pouilly-Fuissé and mouth-watering lobster salad. The enchanting Dutch capital of Amsterdam is home to 16 Michelin-starred restaurants, and thanks to its legendary multiculturalism the city boasts a diverse array of award-winning eats to suit any taste — from Japanese Teppanyaki to the traditional flavours of the Netherlands. Interestingly, the Dutch capital currently has no three-star Michelin-rated restaurants, but that’s not to detract from the quality of the fare on offer here.

As the first and only traditional teppanyaki restaurant in Europe to be awarded a Michelin star, Sazanka offers a truly unique dining experience for those who enjoy this ancient form of Japanese cookery. Sazanka is located on the ground floor of the Hotel Okura in Amsterdam’s trendy De Pijp neighbourhood, and serves up an array of fish, meat and vegetarian dishes in the traditional teppanyaki style — with diners seated around a hot griddle, on which a highly-skilled chef whips up delicious authentic fare inches from your plate. As well as wonderfully aromatic cuisine, you can also look forward to sampling an array of rare wines and sake.

Amsterdam local Ron Blaauw turned the classic gastropub on its head with the creation of Ron Gastrobar, which offers Michelin-star quality food with the relaxed informality of a contemporary pub and bar. Located in the centre of Amsterdam, this bar-cum-restaurant offers no-frills cuisine that’s expertly prepared and cooked, offering lively and original flavours without the pomp and grandeur of other Michelin-starred eateries. This refreshing approach is reflected in the restaurant’s pricing too, with a meal here costing a fraction of the price of other Michelin-rated eateries.

Marrying the charm of the countryside with the elegance of Amsterdam’s historic city centre; the two Michelin-starred Libreje’s Zusje is the signature restaurant of the Waldorf Astoria, whose private courtyard garden provides the perfect place to enjoy a quiet stroll after a decadent meal. Granted two Michelin stars on account of its expertly crafted dishes, Libreje’s Zusje’s menu borrows from several culinary influences, with Asian and Middle Eastern cuisines featured prevalently. Despite the international menu, all the dishes are made using locally-sourced regional ingredients — making for truly inspiring culinary combinations. 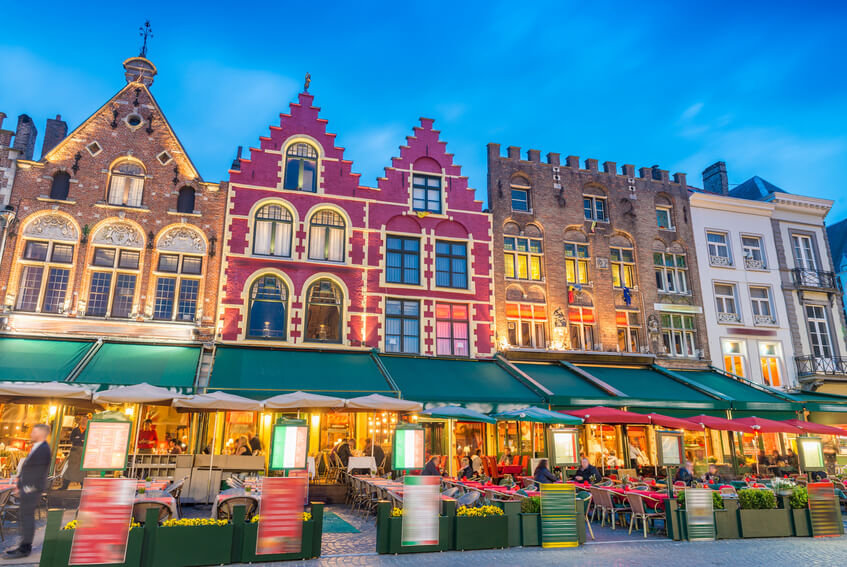 While millions flock to Bruges each year to admire its medieval architecture and picturesque canals, few are aware of the town’s incredible culinary offering, which is considered among the best in Belgium. Amazingly, for a relatively small town, Bruges is home to no less than eight Michelin-starred eateries, giving locals and visitors plenty of choice when it comes to choosing a premier spot for lunch or dinner.

Sans Cravate is a charming and informal Michelin-starred eatery in the centre of Bruges, whose name literally translates as ‘no tie’ — alluding to the restaurant’s playful and casual approach to fine dining. With top quality ingredients and a range of creative, palate-teasing dishes, this small eatery, alongside its sister establishment, the Hubert Gastrobar, has risen to become one of the most popular eateries in Bruges.

Located within an attractive Flemish villa on the outskirts of Bruges, De Jonkman is an exceptionally charming restaurant whose owner and head chef specialises in fresh, seasonal dishes. Despite being limited to local ingredients which are in season, the De Jonkman menu manages to be consistently inventive and exciting, offering up a range of carefully crafted dishes that are as authentic as they are unique.

Tucked away on the outskirts of Bruges beneath a canopy of native trees is Hertog Jan, a three Michelin-starred restaurant which takes local Flemish cuisine to a whole new level. Head chef, Gert De Mangeleer, has created a supreme menu which focuses on local ingredients sourced from the surrounding fields, or else from the neighbouring North Sea. Signature dishes include grilled Nieuewpoort sole with potato mousseline, Steenvoorde pigeon with celeriac risotto and black carpentras truffle with oxtail fondue and Polder potato cream.

If savouring delicious, expertly crafted food is one of your great passions, you’ll be well catered for during a luxury Emerald Cruises river cruise. Travelling to some of Europe’s great Michelin-starred cities, we can help you sample some of the continent’s most iconic regional dishes and delicacies. To browse our collection of river cruises across Europe and beyond, visit the homepage or call us on 855 444 0161.