7 Small Museums in Rome you don't want to miss

Rome is a city best known for its Colosseum, the Vatican, and the Trevi Fountain (to name but a few). This history-steeped city is clad with layers of immense monuments and attractions – generations of Roman leaders built new structures right on top of streets and buildings that were still in use. A trip to the Italian capital is sure to see your itinerary jam packed, no matter what type of attractions you are looking for.

For those who are looking to visit some smaller and even lesser-known attractions in Rome while still immersing themselves in Roman history and culture, the city hosts a wealth of smaller museums and galleries boasting iconic artefacts and artworks.

Here’s our pick of the best small museums in Rome, from ancient artefacts to modern art: 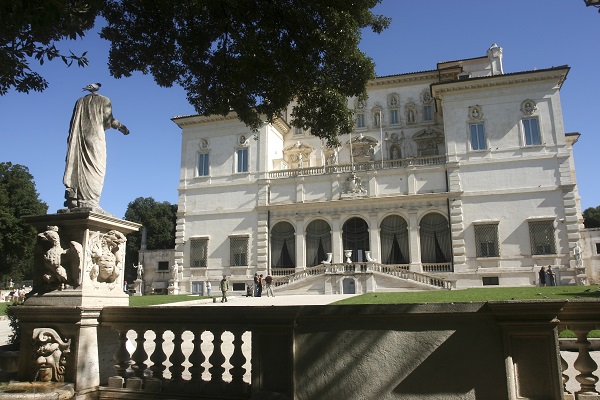 Once home to the powerful Borghese family, Villa Borghese and its fascinating art collection has now been transformed into a museum and art gallery. Boasting 20 frescoed rooms filled with ancient sculptures, bas-reliefs and mosaics, as well as paintings and sculptures spanning the 15th to 19th centuries, this gallery has an illustrious (if not rather nefarious history).

With Camillo Borghese rising to power as the pope in 1605 (Pope Paul V), his cardinal nephew Scipione Caffarelli was able to use his uncle’s new position to begin building one of the largest art collections of his time. Scipione was able to ‘confiscate’ and steal not just individual works but whole collections with the help of the pope.

Approximately 100 paintings, including works by a young Caravaggio, were confiscated from Cavalier d’Arpino’s studio, and Scipione purchased 71 paintings belonging to Cardinal Sfondrati which presumably included Titian’s Sacred and Profane Love. In 1605, Scipione acquired Caravaggio’s Madonna and Child with St. Anne, which was due to appear in St. Peter’s Chapel but had been rejected supposedly by the pope himself. Perhaps the Borgheses’ most shocking acquisition was that of Raphael’s Deposition, which was stolen on Scipione’s behalf from the Convent of San Francesco a Prato in Perugia and was declared by Pope Paul V as Scipione’s private property.

Today, visitors to Rome can attend the Villa Borghese and view Scipione’s large collection of artworks, as well as the halls of the villa itself. Aside from the main collections, the villas storerooms have also been transformed into additional picture galleries holding around 260 paintings which can be viewed by appointment only.

A remarkable example of industrial archaeology, the Centrale Montemartini once served as the first public plant in Rome producing electricity. While the plant is no longer active, the space has now taken on a new purpose.

As renovations began on Capitoline Museum spaces (Palazzo dei Conservatori, Mueso Nuovo and Braccio Nuovo) in the late 1990s, organisers were looking for a place to house the displaced monuments which works were completed without taking the artefacts away from the public.

The Capitoline Superintendence for Cultural Heritage commissioned an exhibition within the power plant named The Machines and the Gods, where ancient sculptures would sit amongst the large pieces of electrical equipment and showcase their dramatically contrasting worlds. Originally intended as a temporary exhibition space, the Centrale Montemartini has now become a permanent part of the Capitoline Museum group which showcases Capitoline’s most recent acquisitions, focusing especially on scientific exhibitions.

While Rome is famous for its ancient artworks and antiquities, visitors to Rome should not forget about more the more contemporary side of the coin. The Galleria Nazionale d’Arte Moderna (The National Gallery for Modern and Contemporary Art) plays host to over 20,000 pieces of contemporary art, including paintings, drawings, sculptures and installations, spanning from the 19th century to present day.

An initial collection was founded in 1883 by then government minister Guido Baccelli, who had obtained the king’s signature to open such an establishment. This collection first grew thanks to the likes of Italian sculptor Ettore Ferrari and Italian painter and film director Aristide Sartorio who contributed to bring value to Italy’s modern art scene. To this day, the gallery remains the only national museum in Italy dedicated to the modern arts.

The collection eventually needed a new home to accommodate its ever-growing size. In 1991, architect and engineer Cesare Bazzani designed the Palazzo delle Belle Arti – the Palace of Fine Arts – for the Universal Expo as a celebration of the 50th anniversary of Italy’s unification. Three years later, this became the final home of the Galleria Nazionale d’Arte Moderna. Art events were held at the gallery every four years (known as Quadriennale d’Arte) which were so popular they saw the collection continue to expand and its space in the Palazzo delle Belle Arti double.

While the Capuchin Crypt may seem somewhat of a morose and gloomy destination to add to your Roman itinerary, its history has an impressive story to tell, beginning with an order of Franciscan Friars.

In 1525, a Franciscan friar within the Catholic church, Matteo da Bascio, separated from his order to live in the spirit of their patron and founder (St. Francis of Assisi) in a more authentic way. He aspired to live a life of solitude and penance, but his Franciscan superiors disagreed with Bascio’s ideology, and he was forced into hiding. However, Pope Clement VII later granted Bascio permission to form his own order, the Order of Friars Minor Capuchin, and soon others joined him.

Over a century later, Pope Urban VIII – whose brother Antonio Barberini was a Capuchin friar – commissioned the building of a new church for the order, Santa Maria della Concezione dei Cappuccini. In 1631, Barberini order that the remains of over 1,000 Capuchin friars be exhumed from their previous friary and transferred to a crypt – now known as the Capuchin Crypt – beneath the new church. The bones of these remains were arranged along the walls, visible to all. The order began to bury their dead in the crypt, as well as the bodies of poor Romans whose family couldn’t afford otherwise. Each evening, the friars would visit the crypt to pray and reflect before retiring for the night.

Today, the Capuchin Crypt contains the remains of over 4,000 friars from the years 1500 to 1870. Those travelling to Rome are able to visit the crypt, which is split into five chapels each dimly lit by natural light which only enters through cracks in the walls. The bones remain on display, arranged in intricate patterns and creating macabre works of art – some full skeletons even remain intact and are draped in Franciscan habits. The museum within the crypt is a place to learn about the history of the Capuchins and includes an artwork by Caravaggio. 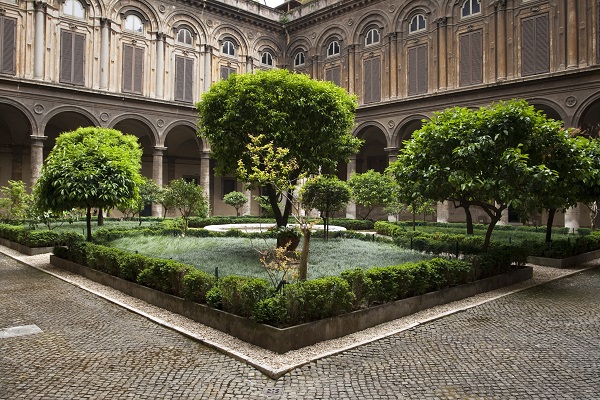 Housed within the Palazzo Doria Pamphilj, the home of a powerful Roman family, is the Galleria Doria Pamphilj. The gallery boasts a large collection of paintings which have been assembled since the 16th century by the Doria, Pamphilj, Landi and Aldobrandini families – a group of families who were united through marriages and became known under the simplified surname ‘Doria Pamphilj’.

In the 17th century, Camillo Pamphilj was bequeathed a large collection of paintings and furnishing by his uncle Giovanni Battista Pamphilj, who served as Pope Innocent X from 1644 until his death in 1655. This collection included Velázquez’s Portrait of Innocent x, which is considered to be the masterpiece of the palazzo’s collection.

The palazzo itself grew throughout the centuries and is now one of the largest in Rome still under private ownership. The main collection of the gallery is displayed in the palazzo’s staterooms, including in its chapel (complete with the mummified relics of the family’s saint). The remaining collections are houses within four gilded galleries, each exquisitely decorated, which surround a courtyard. As the collection grows, further rooms continue to be converted into galleries. 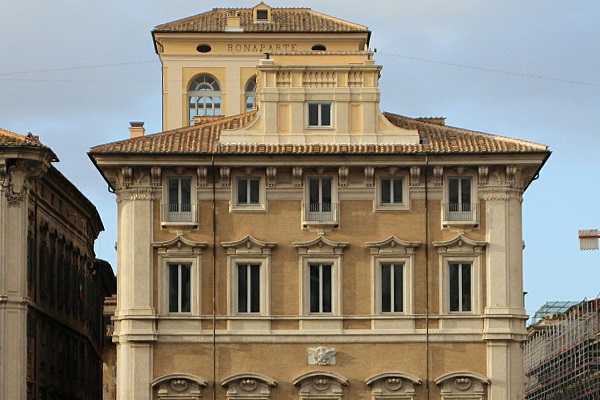 Formerly known as D’Aste Rinuccini, Palazzo Bonaparte overlooks the famous Piazza Venezia in the Pigna district of Rome. The palazzo was built between 1657 and 1677 by architect Giovanni Antonio de Rossi on behalf of two marquises, Giuseppe and Benedetto D’Aste. The house was later passed to Florentine nobleman Folco Rinuccini, the third Marquis of Baselice, in 1760.

In 1818, the palazzo was purchased for 27,000 gold plates by Maria Letizia Ramolini, the mother of French emperor Napoleon Bonaparte, who lived there until her death in 1836. Madame Letizia was known for sitting out on one of the property’s side balconies where she could people watch and enjoy the passage of carriages below in the piazza but was hidden from view herself. The lady of the house enjoyed this pastime so much, she continued to sit out on the balcony even after she became blind, using the help of a companion to find out what was happening in the streets below.

Sitting on the corner of Via del Corso and Piazza Venezia, the striking palazzo has become one of the most recognisable buildings in Rome. In the past decade, property was acquired by Italian insurance giant Assicurazioni Generali and has been restored and redeveloped into a museum under Italy’s Value and Culture program. The palazzo now includes its own exhibition space, and visitors can tour the property’s beautifully decorated rooms and frescoed hallways. It is even possible to visit the hidden balcony and enjoy the views of the piazza, just as Madame Letizia once did!

An underground metro station may not seem like a likely place for a museum but there is reason behind this strange placement. The new Line C was proposed for Roman Metro all the way back in the 1990s. Knowing the city’s history and the likelihood that artefacts would be buried beneath the ground, archaeological investigations began at 24 sites for proposed stations in 1999.

While it was expected that some of the city’s history would be unearthed during these investigations, no one expected just how much would be uncovered. During the construction of the line, its stations and ventilation systems, works regularly came to a halt. Artefacts, antiquities and even entire buildings were discovered buried beneath the city, including what was thought to be Rome’s first aqueduct, Aqua Appia. In 2007, at the proposed site for the Piazza Venezia station, construction workers even uncovered the Athenaeum, the legendary school founded by the Roman emperor Hadrian.

In 2018, Line C was extended to San Giovanni, where a new station was opened. What sets this station apart from others is that it also doubles as a museum space, showcasing archaeological findings from the C Line. Statues and vases that once slowed down construction are now proudly displayed within the station. As you descend through the station, you are taken on a journey through history starting with more modern antiquities at ground level and ending with Pleistocene (or Ice Age) artefacts at platform level.

With a number of Emerald Cruises Western Mediterranean itineraries cruising to or from the nearby city of Civitavecchia, now is the perfect time to start planning your trip to Rome. You’ll also have the chance to extend your stay in Rome with two nights in the Italian capital. Emerald Cruises takes care of transfers from your superyacht to your hotel and to the airport. You’re even given a guided tour of this historical city, with plenty of time after to enjoy the many small museums in Rome at your own pace.

Ready to start planning your Roman holiday today? Download your FREE luxury superyacht cruising brochure for a closer look at the Emerald experience that awaits you!