4 European Foodie Destinations to Consider for Your Next Holiday

For foodies on holiday, dining off the eaten track is just as important as putting your feet up, getting that well-earned tan or seeing the sights. The gastronome will not be satisfied until they’ve experienced the local fare a region has to offer; the culinary nook and crannies just waiting to be discovered and devoured are a hugely important part of the adventure.

For experienced epicureans and fledgling foodies alike, we’ve compiled a selection of some lesser-known food destinations for your delectation that all discerning food fans should consider next time the travel bug hits.

Germany’s fourth largest city is famous for straddling both sides of the Rhine river, its gargantuan cathedral and a vivid cultural backdrop. With all that, you’d be forgiven for forgetting about its rich culinary scene too, but Kölsch dining is something not to be missed during your time here, a cuisine that’s rustic, delicious and daring, at times.

An interesting take on sweet and savoury, Himmel und Ääd (literally Heaven and Earth) is so called since its constituents, apples and potatoes represent the sky and the ground, respectively. Resembling mashed potatoes, sweet apple notes cut through with a refreshing bite. Traditionally served with blood sausage, experience it in one the city’s traditional beer halls for a classic Kölsch meal.

After a long day of scoping the city, Schweinshaxe - or Pork Knuckle - will sate hungry visitors. Ranging anywhere from 600 to 1400g, the Schweinshaxe is something of a spectacle on the plate. Soft and succulent, with a satisfying crunch to the outside, it’s usually served with potato dumplings to soak up the tender meat’s jus. Not one to be missed on your travels. Another dish that’s astride the sweet/savoury divide, Soorbrode is an adventurous dish originally made with horsemeat, though nowadays it’s more likely to use beef – best to check beforehand. Cooked in a special raisin sauce, with a sharp vinegar kick to boot, its undeniable fragrance proves impossible to resist.

Mettbrötchen, literally meat on a bread roll, might not sound like anything special, but it’s prepared in a way you might not be accustomed to. Popular with Cologne locals, the meat on this sandwich is raw: unsmoked, uncooked and with very little preparation involved, just salt, pepper and a sprinkling of raw onions. Even for those usually weak of stomach, it’s a delicious treat that has to be sampled during your time here. World Heritage-listed since 1988, Salamanca is also home to Spain’s oldest university, a bustling cultural life and hearty cuisine steeped in rustic tradition. A reflection of its countryside location, the vast pastures and spectacular highlands are reflected in Salamanca’s provincial fare. A menu of culinary delights you might not be necessarily familiar with, Salamanca’s cuisine is surely one to be relished.

Traditionally eaten al fresco during the “Monday of the Waters” festival, hornazo is an oven-baked pastry stuffed with ham, sausage, bacon and cooked egg. With its characteristic diagonal-grid patterning, hornazo is hugely popular across Salamanca, sold at most bakeries in the region. Crumbly and indulgent, be sure to grab a slice of this Salamanca custom if you stop here. 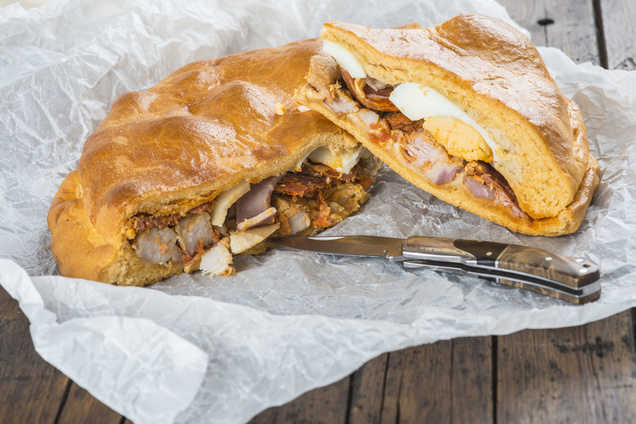 Speaking of indulging, Farinato sausage is a true symbol of Salamanca cuisine, a calorific delicacy that once bared the nickname “the sausage of the poor” due to its simple, unfussy ingredients. Admired in gourmet circles thanks to its distinctive taste and versatile, adaptable recipes, it’s not uncommon for Farinito to be made with cumin, pumpkin, aniseed and brandy. Usually served with fried or scrambled egg, this is Salamanca on a plate, pure and simple. On the sweeter side of things, Perrunillas are distinctive in appearance and rich in taste, with an overwhelming melt-in-the-mouth texture that must be savoured while you’re here. Historically made for special occasions like baptisms, weddings, and festivals, the dry texture makes the perfect accompaniment to tea and coffee, while that unmistakable almond centre adds some extra bite.

Since Bratislava is something of a melting pot influenced by the cultural clout of Hungarian, Austrian, German and Slovakian history, its cuisine is a tough one to define. Slightly easier to get a hold on however, are the places to avoid while you’re here.

As a rule of thumb, it’s best to steer clear of anywhere that offers ‘Slovak’ in the name, makes mention of ‘traditional Slovak cuisine’ or features pictures of pigs, schnitzel or bryndzové halušky outside on the street. If you want authentic, traditional food, look somewhere else.

Perhaps its most famous local dish, bryndzové halušky is a must-try meal made up of potato dumplings and sheep’s milk cheese with streaky bacon. Similar to gnocchi, it’s hearty and rich, indicative of both Bratislava and Slovakia’s historically simple, spare cuisine, when the majority of the population lived in self-sufficient villages. 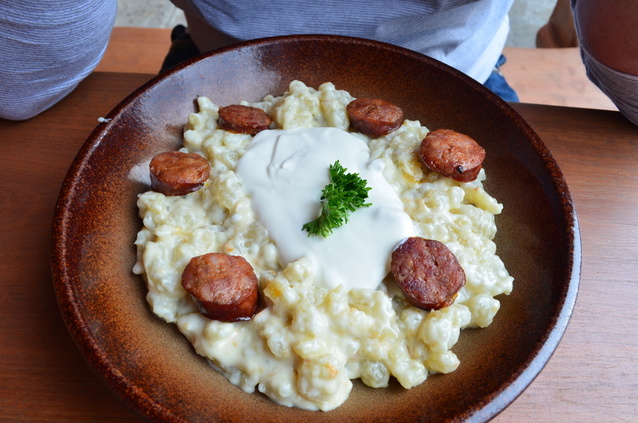 Elsewhere, lokše – baked potato pancakes – accompany roast goose, a signature dish that provides substantial sustenance to sate even the hungriest of travellers. Nourishing soups and stews warm and delight, like kapustnica (a sauerkraut and sausage medley) and Segedin goulash, a Hungarian-style pork stew served up with dumplings. Hugely inspired by its changing seasons, Bratislava favours light wine-based sauces in the spring and light soups served with fresh vegetables in summer. As the weather gets milder, autumn offers a plethora of chestnut, squash and pumpkin dishes, while winter fare opts for robust, sizable portions of bean and lentil stews.

We’ll resist some sort of hungry in Hungary pun and let the magnificent city’s cuisine speak for itself. By turns idyllic and imposing, Budapest is also home to some delightful dishes that truly warm body and soul. Notes of paprika enrich stews, soups and meat dishes with deep red hues, its piquant aromas proving impossible to resist, while cheese dishes prove popular with local and traveller alike. Another dish rich with the deep shade and unctuous aroma of paprika, Halászlé, or Fisherman’s Soup, is a very spicy dish whose exact means of preparation are somewhat shrouded in mystery. A simple recipe, the correct ratio of spices, fish and water, as well as its cooking time, make all the difference, and the most dedicated seafarers’ recipe have stayed ironclad for some time. Lángos, derived from the Hungarian word for flame, is a favourite of street food vendors at Budapest’s Central Market Hall. A fried flat bread topped with everything from mashed potatoes, cheese, ham, sour cream and even sweet toppings, it’s a treat that locals swear by.

Have these mouth-watering dishes suitably enticed your taste buds? Head over to our dedicated European river cruise page. Or if you need any further help or advice, call the Emerald Cruises team today.