10 Photographs That Will Make You Want to Explore the Mekong

The beautiful and mystical Mekong winds through some of the most awe-inspiring stretches of Southeast Asia, through the cultural heart of Indochina. The vast waterway has shaped lives, cultures and traditions along its banks, with tiny villages and large cities similarly reliant on its peaceful ebb.

Many of Cambodia and Vietnam’s most inspiring and vibrant sites are dotted along the Mekong, interspersed with vast swathes of incredible beauty. From grand colonial-era architecture in Ho Chi Minh City to the symbols of the Khmer Empire, the backdrop along the Mekong is as varied as the cultures of the different villages it passes through.

Time seems to have stood charmingly still along much of the Mekong, with ancient ways of life still observed, passed down from generation to generation. And many of these ancient traditions can still be viewed as you navigate the Mekong today, providing an insight into the culture of this amazing region.

To whet your appetite for a journey down the Mekong, we have compiled 10 delightful photographs taken from the river or within touching distance of the banks. Fishing supports so many villages and settlements along the Mekong, and get up early enough and you should be able to watch the skilled fishermen in action. Using ancient techniques, the locals are highly skilled in scouring the water for some of the 1,300 different species of fish said to live in the river to sell at local markets. The river is home to some of the largest freshwater fish species in the world, including the Mekong catfish, Chaophraya catfish and giant freshwater stingray – testing the skills of even the most experienced of local fishermen. Formerly known as Saigon, Ho Chi Minh City is a southern Vietnamese city, characterised by its delightful mix of French Colonial and Khmer regime architecture. The largest city in Vietnam, Ho Chi Minh City is one of the nation’s great cultural hubs, and home to many iconic buildings – including the Ho Chi Minh City People's Committee. This extravagant yet elegant French Colonial style building, erected in the early 20th century, may not be open to the public but still draws crowds thanks to its captivating façade. In 1990, a bronze statue of the revolutionary Vietnamese leader, Ho Chi Minh, was erected outside the building to commemorate what would have been his 100th birthday. 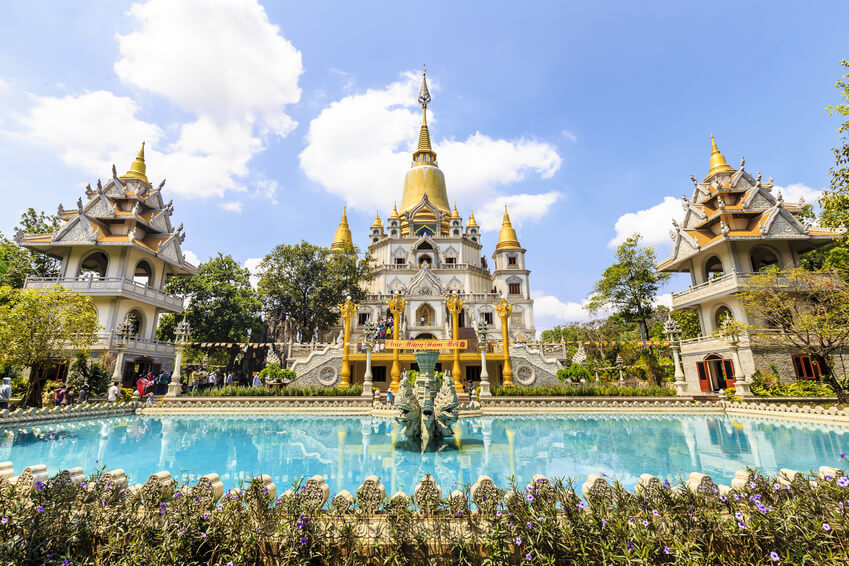 The Buu Long Pagoda is less than an hour from the centre of Ho Chi Minh City, but offers a peaceful sanctuary, surrounded by beautiful river and country views. An array of charming walking areas, complete with fountains and gardens, surround the ornate Buddhist pagoda. Monks still inhabit this beautiful old religious complex, and can often be seen meditating, strolling and mingling with visitors, all the while adding to the serenity of the area. The pagoda itself is a delightful piece of Khmer Empire architecture, with three serene towers reflected in the peaceful pool laid out in front. 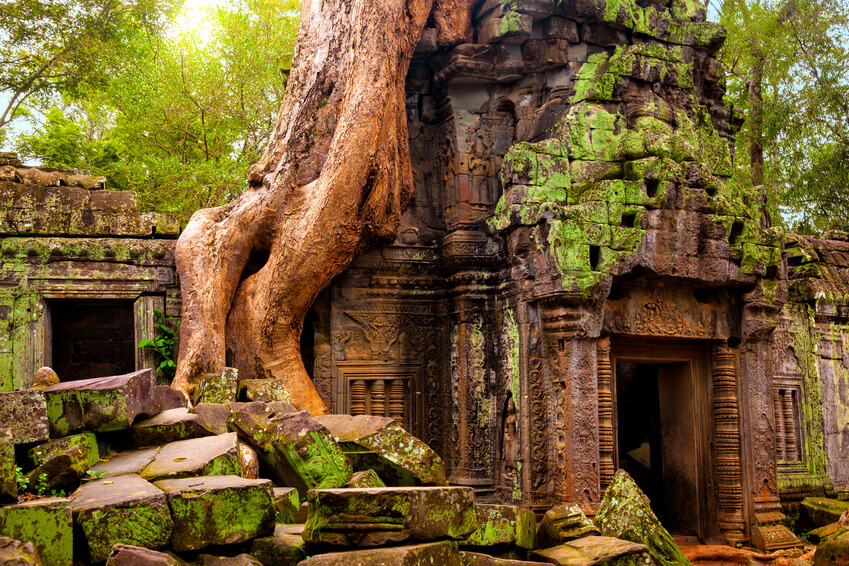 Ta Prohm is the modern name for the temple at Angkor, Siem Reap in Cambodia. Instantly recognisable for the trees which have grown wild out of the structure of the temple, Ta Prohm offers a uniquely haunting beauty. Creating a wonderful atmosphere, the marriage of natural life and historical extravagance have made Ta Prohm one of Cambodia’s most popular sites amongst visitors. Over 800 years old, Ta Prohm is still structurally very similar to its original design. The temple was abandoned and forgotten following the fall of the Khmer Empire in the 15th century, only to be discovered again in the early 21st century – when careful restoration work commenced. 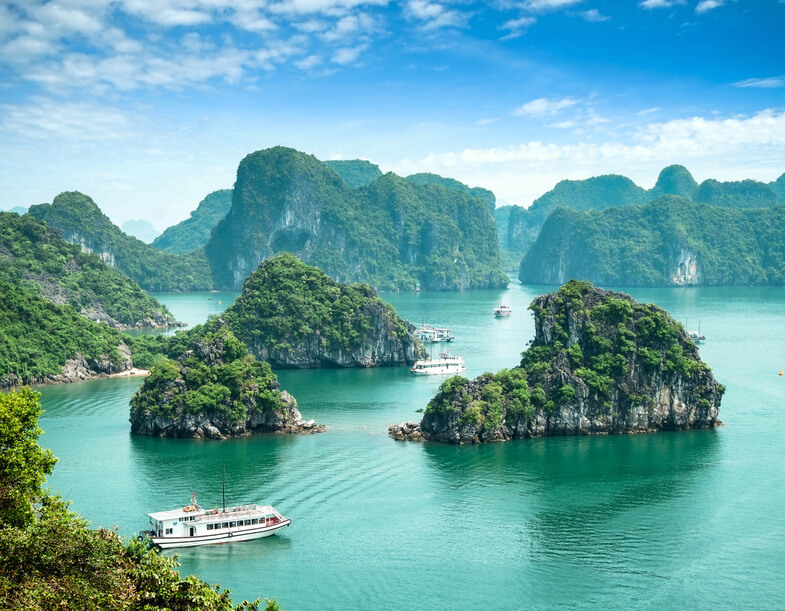 Few stretches of water can match Halong Bay for sheer beauty. Located in northeast Vietnam, Halong Bay is a small natural bay, known for its emerald waters, and towering limestone islands topped with lush rainforests. Navigate around these delightful little islands at dusk or dawn for some of the most breath-taking views Southeast Asia has to offer. The area is particularly popular with scuba divers, rock climbers and hikers, keen to explore the unique flora and wildlife this captivating part of the world possesses. 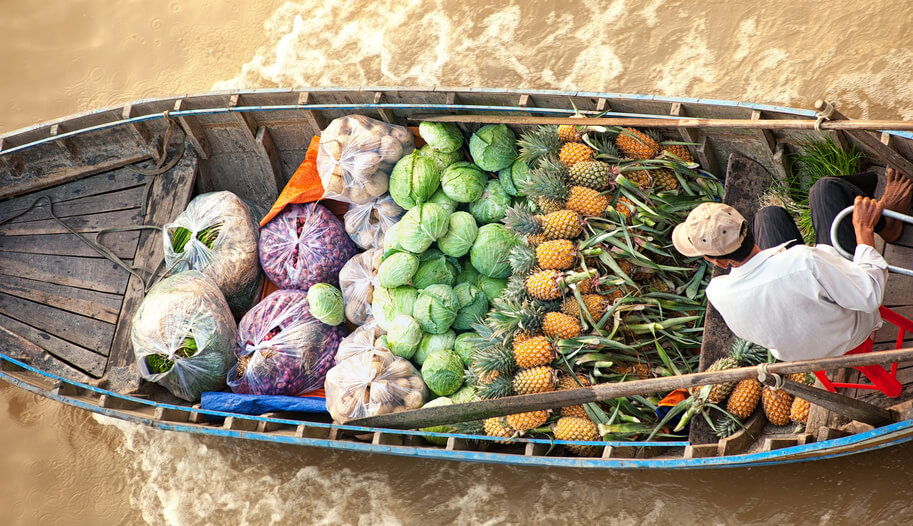 No trip to Vietnam is complete without paying homage to the floating markets of Cai Be. Sustaining life for generations, the river-top marketplace is made up of dozens of small boats selling everything from locally-sourced ingredients to arts and crafts. Bartering is more than welcome if you’re looking to secure a bargain on some of the local produce, or want to secure an authentic souvenir for loved ones back home. The large Catholic cathedral protectively looking over the floating markets provides a delightful background to a truly unique scene. 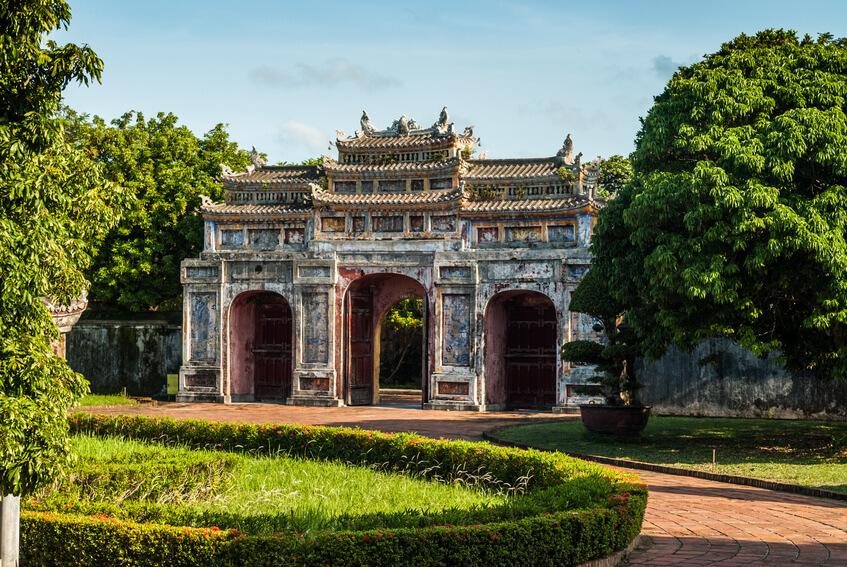 A walled palace within the citadel city of Huế, the Huế Imperial Palace took 200 years to build between the 14th and 16th centuries, and was a glorious symbol of Vietnamese wealth and power. Boars helped complete the building of this incredible citadel, carrying materials from distant Hoi An. The Imperial City is awash with opulent palaces and shrines, many dedicated to the ruling Nguyen Dynasty whose emperors lived in Huế for close to 150 years. Today, the entire Imperial City is listed as a World Heritage Site, and is a popular attraction for Vietnamese and international travellers alike. 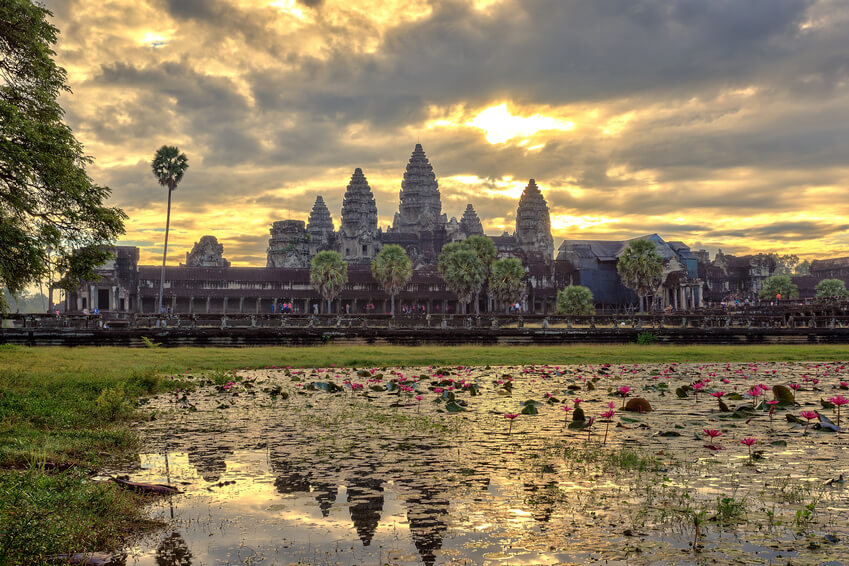 An undoubted highlight of any trip to beautiful Southeast Asia, Angkor Wat is one of the world’s greatest historical monuments, and perhaps the finest legacy left by the Khmer Empire. A huge complex of temples in Cambodia and the largest religious structure in the world, Angkor Wat was originally constructed as a Hindu temple to worship the god, Vishnu.

Located just north of the modern town of Siem Reap, legend has it that Angkor Wat was built in a single night by a divine architect. Remarkably well preserved, Angkor Wat provides a beautiful setting for a spiritual stroll and a journey through the stunning history of Cambodia. 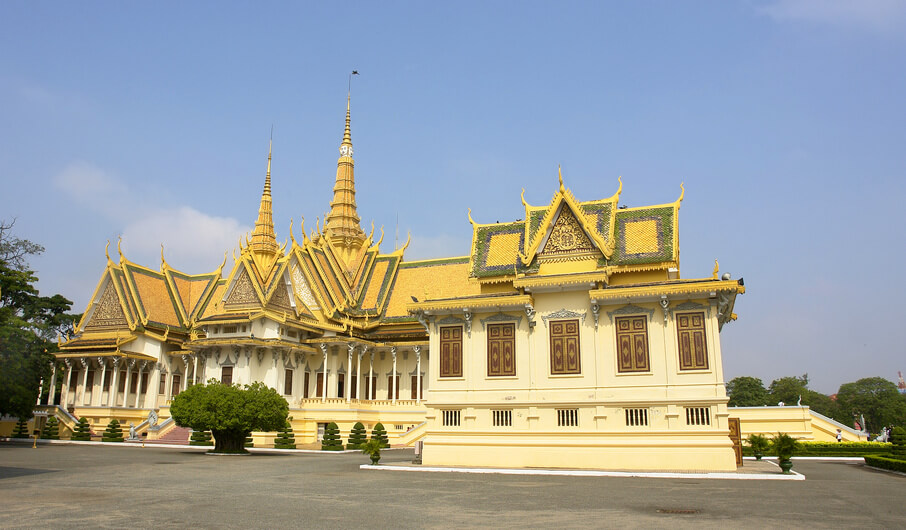 The Royal Palace in Phnom Penh demonstrates two of Cambodia’s most arresting periods, combining elements of Khmer Empire and French Colonial architecture. The French flourishes complement the striking design of the palace throughout its many halls, pavilions and pagodas. The current royal residence of the king of Cambodia, the Royal Palace sits on the crossing of the rivers Tonle Sap and Mekong, a position of historic power.

Today, visitors are permitted to wander around many of the palace’s compounds, and even into the throne room. 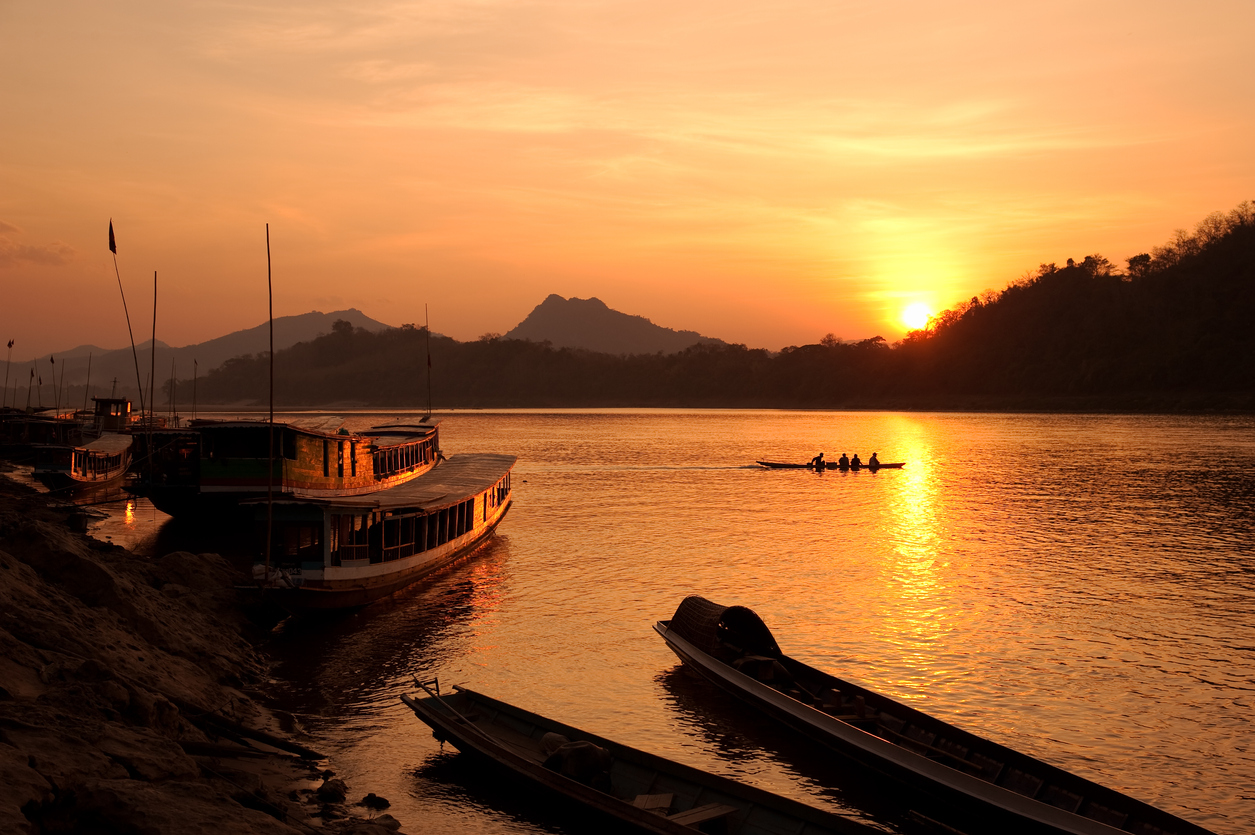 The Mekong River is hugely symbolic to the Southeast Asian countries, giving life to the cities and communities which sit on their banks. Many settlements stretch from the banks and onto the waters of the Mekong with the river supporting almost every aspect of life. As you navigate the river, you’ll be given a front row seat, delving into what makes local life tick.

Click here to view our full collection of luxury river cruises in Southeast Asia. Or, if you need any further help or advice, call the Emerald Cruises team today on 855 444 0161.
Tags: Landmarks Luxury Mekong photography travel