To inspire your visit to Russia’s dramatic second city, discover our in-depth guide to Saint Petersburg

Built from the ground up by at the bequest of Peter the Great, Russia’s second city echoes the architectural tropes of Paris, London and Berlin, marrying European style with tangible Russian heritage, folklore and revolutionary spirit.

Grand in scale, Saint Petersburg extends for miles from the banks of the Neva, with a series of historic canals crisscrossing its boulevards and thoroughfares. The so-called ‘Venice of the north’ is as beautiful and vibrant as its southern namesake – a pleasure to explore and discover, whatever your travel agenda.

To inspire your visit to Russia’s dramatic second city, here we provide an in-depth guide to Saint Petersburg – from its architectural and cultural treasures, to its history and cuisine.

The sweeping cityscape of Saint Petersburg is unlike any other on the continent, with imperial palaces and grand parks bordering elegant canals and waterways – small wonder much of the city is designated UNESCO World Heritage Site status. Explore the architectural highlights of Saint Petersburg below.

Church of the Saviour on Spilled Blood

Considered a masterpiece of the Russian Revival style that emerged in the 19th century, the Church of the Saviour on Spilled Blood is an ornate church located on Nevsky Prospekt, one of the most famous boulevards in Saint Petersburg. Constructed on the site where Emperor Alexander II was assassinated in 1881, the church was commissioned by his son, Alexander III, who provided its official title, the Cathedral of the Resurrection of Christ. With its colourful onion domes, similarities could be made between it and Moscow’s Saint Basil’s Cathedral. Resemblances aside, this is one of the most striking buildings in Saint Petersburg, and the highlight of a guided tour of the city. Saint Petersburg is home to a handful of exquisite palaces, which stand as testament to the city’s grand imperial past. Foremost among them is the Peterhof or Grand Palace, which is found on the banks of Nevskaya Bay to the west of the city. With its sumptuous Baroque architecture and sweeping grounds, this is the palace of tsars and emperors, and was regularly used as a summer residence by many of Russia’s great rulers during the 18th and 19th centuries. Remarkably, the palace took over 200 years to build, with major renovation works continuing from the early 1700s to the early 1900s. The result is a palace epic in scale and grandeur, with all the trappings you’d expect from the ‘crown residence’ of Russian emperors. Arguably the defining symbol of Saint Petersburg, the Winter Palace was the official royal residence of the Russian tsars and emperors. Built by order of Empress Elizabeth Petrovna in the late 18th century, the palace is revered for its classic Baroque architecture, its ornate, column-lined façade providing one of the greatest highlights of the Neva River. The Winter Palace was designed by Italian architect Francesco Bartolomeo Rastrelli in 1754, and its creation inspired a defining shift towards the Baroque in Russia’s second city. Today, forming part of the iconic Hermitage Museum, the Winter Palace is one of the great must-see sights of Saint Petersburg.

Given its affectionate moniker as the ‘Venice of the north’, Saint Petersburg is interlinked by hundreds of bridges, crisscrossing the Neva and its network of historic trade canals. Of the city’s many water crossings, the Bankovsky Bridge is one of the most iconic. A footbridge spanning the Griboedova Canal, the bridge is flanked by four golden griffins, into whose mouths the suspension chains are connected. The decorative elements of Bankovsky were developed by sculptor P. Sokolov, whose mythical creations can be seen elsewhere in Saint Petersburg. From the bridge, you can take in a wonderful view of Kazan Cathedral, Singer House, Nevsky Prospekt and the Church of the Saviour on Spilled Blood. 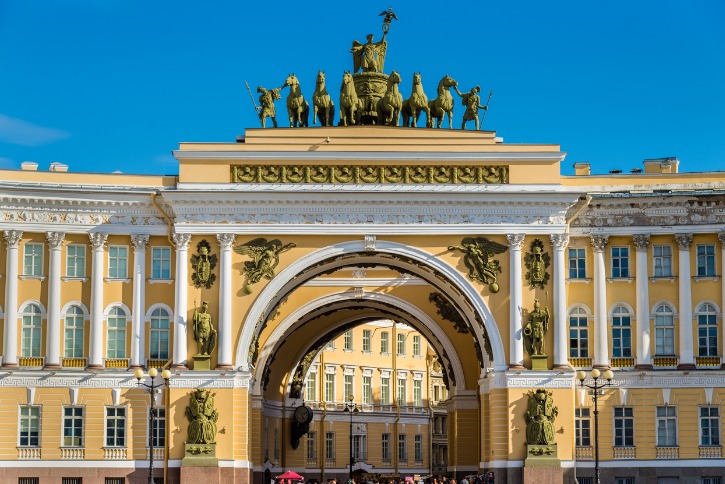 Those with a penchant for modern art will adore Saint Petersburg’s Erarta Museum, which houses contemporary works from over 300 Russian artists. This innovative art space, which is located in the city’s elegant Vasileostrovskiy District, is revered for its multimedia exhibitions, which range from paintings to sculptures, interactive installations to mixed media projects. With over 2,800 unique works of art to explore, this is an immersive cultural centre which promises a glimpse into the progressive side of modern Russian culture. Exhibits not to miss including the ‘Theatre With No Actors’, the ‘U-Space’ space-orientated installations, and the ‘Art As Literature’ series.

With leisure time to spend in Saint Petersburg as part of our Russian river cruise itineraries, why not spend it pursuing that most Russian of art forms: ballet. Russia, and particularly Saint Petersburg, have long been associated with ballet, setting global standards since the 18th century. Many venues throughout Saint Petersburg, including the legendary Mariinsky Theatre, give you the opportunity to experience the thrill and poise of Russian ballet, with matinee performances allowing you to enjoy the spectacle as part of your visit. What better way to revel in the splendour of Russia’s spectacular second city?

A glimpse into St Petersburg's past

Built in the image of Peter the Great and his wish to rival the leading lights of Europe, Saint Petersburg has a remarkably deep and storied history for a city only as old as the USA. Discover the meteoric rise and stumbling blocks of this proud city in our interactive timeline.

From peasant plates to dishes deserving of an imperial banquet; Saint Petersburg is renowned for its eclectic, nourishing cuisine, which can only be described as classic Russia. Take a look at the three of the city’s must-try dishes below.

Native to the Neva River, koryushka are small fish, similar in appearance and taste to the anchovy. Enjoyed in Saint Petersburg for decades, the fish are normally fried in a light batter, served with a variety of sauces, and eaten whole as a starter or street food snack. The most common time to see koryushka in Saint Petersburg is in the spring, when the Neva has thawed enough for local fishermen to make a good catch. 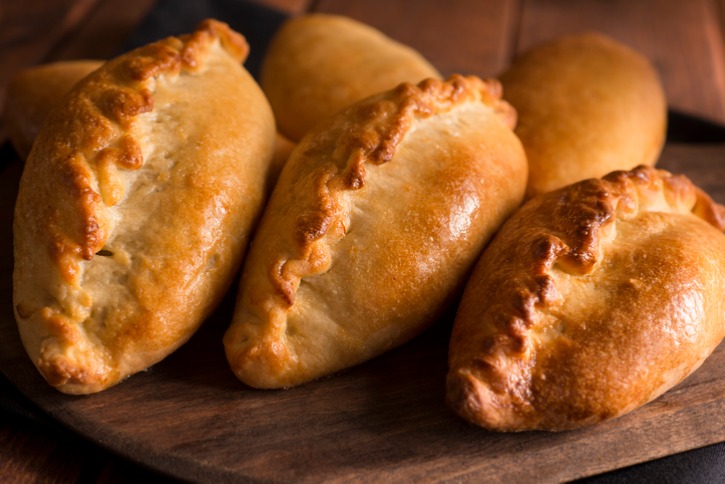 Pirozhki are small fried bread buns, which, at least initially, seem to closely resemble Cornish pasties. Stuffed with a variety of fillings, including savoury ingredients like salmon, mushroom and vegetables, and sweet varieties like plum or cherry, pirozhki are a beloved street food staple in Saint Petersburg, and the perfect snack to enjoy on the move. With their knotted crust, pirozhki are simple to enjoy as you sightsee and tour the city, so be on the lookout for street food vendors. Soup is a staple of Russian cuisine, and you’ll find hundreds of regional broth recipes wherever you travel across the country. In the summer months, Saint Petersburg locals often swap hot soup for cold, with one of the most popular varieties being Okroshka, which is made from vegetables, boiled potatoes, meat, egg and kvass, a beverage made from fermented rye bread. It may sound like an odd concoction, but it’s absolutely delicious, and surprisingly refreshing on a warm summer’s day.

Long dreamt of exploring the enigma of Russia? Join Emerald Cruises for an insightful Volga river cruise, and experience the very best of wonderful destinations like Saint Petersburg and Moscow. For more information or to book your place, visit the homepage or call us on 0808 250 1849.