Rising from the banks of the Danube, the town of Dürnstein is lauded as one of Austria’s most beautiful destinations – offering a wonderful blend of spectacular scenery and immersive local history. Tucked away in the midst of the inspiring Wachau Valley UNESCO World Heritage-listed site, the town is surrounded by historic vineyards and numerous cultural landmarks, not least Dürnstein Castle – an impressive ruin with its own unique story to tell.

For anyone travelling the waters of the Danube through Austria, Dürnstein is a must-see destination brimming with history, culture, myths and legends. The town and its surroundings provide outstanding hiking opportunities, with designated trails criss-crossing the prized Wachau landscape.

At Emerald Cruises, many of our Danube river cruises feature a visit to Dürnstein, giving you the opportunity to see its beautiful castle and enjoy the natural beauty of the region. To introduce the town and its remarkable heritage in greater depth, here we take a closer look at Dürnstein in our river cruise guide.

The history of Dürnstein and its remarkable castle 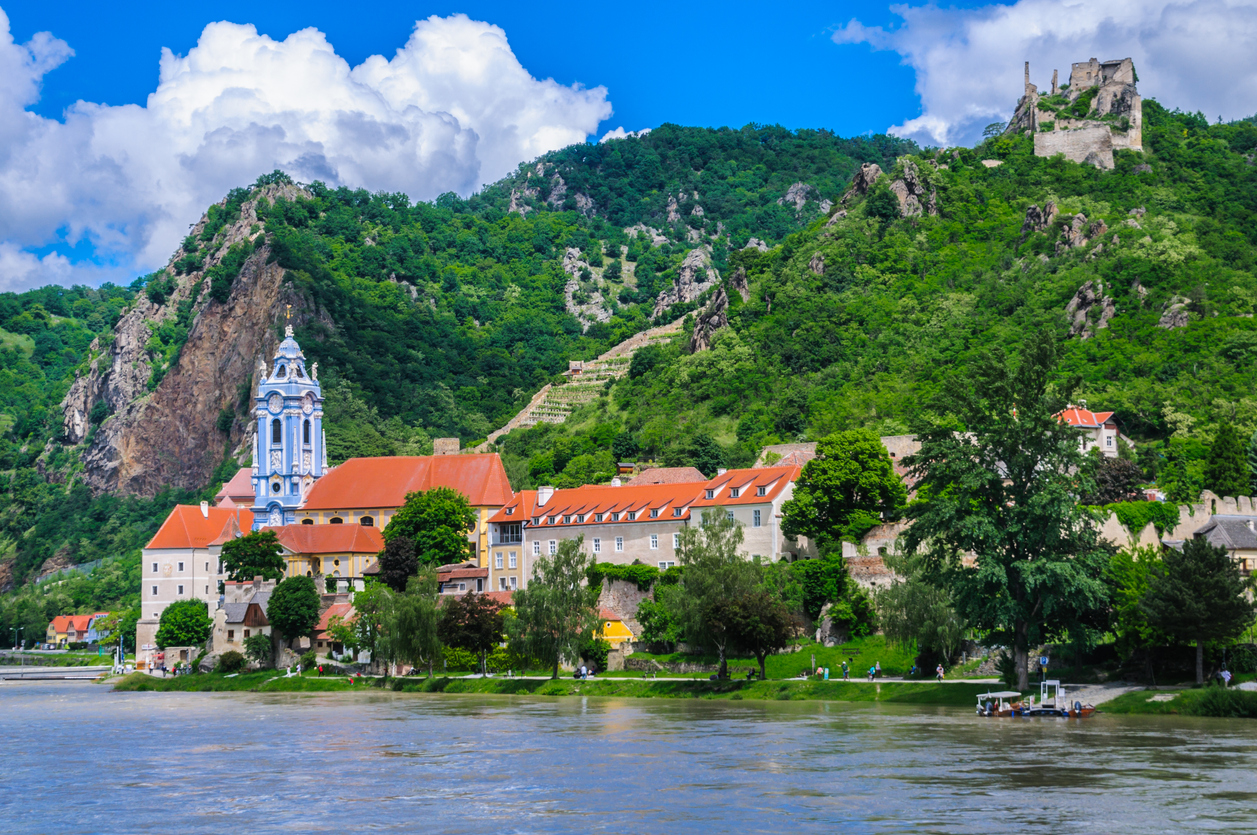 The story of Dürnstein and its now ruinous castle begins in the 11th century, when the wealthy Bavarian-Saxon family of Kuenring were given large territories of land in Lower-Austria by the regional Babenberger prince. Later, the family were appointed bailiffs over Wachau by the Tegernsee Monastery, and thereby tasked with defending its lands and possessions.

Asso von Kuenring was the first of the family to acquire land in the region of present-day Dürnstein and established a small village on the site. Later, his grandson, Hadmar I, would lay the foundations of what would become Dürnstein Castle high on a ridge overlooking his grandfather’s village, and, of course, the mighty trade route of the River Danube.

A turning point in the fortunes of the village came in 1192 when the King of England, Richard the Lionheart, was held prisoner at the Castle by order of Leopold V of Babenberg. The king is believed to have been returning to England from the crusades in southern Europe when he was captured, and a share of his ransom money would ultimately prove invaluable in developing and expanding Dürnstein Castle and its adjoining village. With Dürnstein now a fully-fledged town with a strategic riverside position and strong castle, it grew exponentially throughout the 13th and 14th centuries. In 1347, the estate of Dürnstein was divided between the remaining Kuenring brothers, Leuthold II and Johann I, and was later granted legal status and a coat of arms by Emperor Friedrich III.

After Dürnstein was granted its coat of arms, its fortunes turned. In 1477, the town was captured by Hungarian raiders, and later completely destroyed by the great fire of 1551. In 1645, an even bigger disaster befell the city, as Swedish invaders, led by General Torstensson, destroyed Dürnstein Castle with cannon fire from the waters of the Danube. Despite several attempts to rebuild it, the castle remains a ruin to this day. After the destruction of its castle, Dürnstein’s power and influence dwindled, and foreign powers saw the town less of a threat on the important Danube trade passage. As such, it flourished, and was aided further by the construction of the Wachau Railway, commissioned by Archduke Franz Ferdinand in 1909.

Throughout the 20th century, Dürnstein merged with a handful of smaller communities in the Wachau Valley, including Loiben. By 1994, the town and the region at large were awarded the European Diploma for Protected Areas, an accolade bested six years later by the designation of the Wachau Valley as a UNESCO World Heritage-listed site.

Today, Dürnstein is considered one of the heritage wonders of Lower Austria, and the perfect stop-off from which to admire the serene beauty of the Wachau Valley. A hike to its ruined castle is a rite of passage for many Danube river travellers – an undertaking that promises spectacular views and bags of momentous, fascinating history.

Dürnstein and the Legend of the Lionheart Naturally, one of Dürnstein’s greatest draws for history-loving travellers (particularly those from the UK) is the town’s association with Richard the Lionheart. Held captive in the castle from 1192 to 1193, the legacy of Lionheart’s confinement at Dürnstein has conjured fascination and intrigue for centuries – this being one of the only occasions when an English king was ever successfully incarcerated by a foreign power.

According to local legend, Richard the Lionheart was returning to England from the Crusades when he was asked to dine and rest at the court of Leopold V. During the king’s visit, Leopold V requested that he share his spoils of war, only for the Lionheart to tear up the Austrian flag and refuse. Reacting to this insult, Leopold V had the king arrested, and ordered him to be locked up at Kuenring Castle. There he remained for 12 months, with Leopold V demanding a handsome price of 150,000 silver marks for his release.

During the king’s confinement at Dürnstein, it’s believed that he lived well, and was permitted to allow travelling singers to perform for his amusement. Indeed, one such troubadour is reputed to have been so desperate to play for the King of England, that he travelled far and wide across Austria and German, in the hope that he might find the castle where the king was being held.

Such legends may be myth, but they are what so draws people to the enduring romance and fascination of Dürnstein and its ruinous castle. Today, the designated Lionheart Trail leads visitors on a wonderful hike from the centre of town to the ruins of the castle – perhaps on the self-same path as England’s great medieval ruler.

Experience Dürnstein and the Wachau Valley with Emerald Cruises

Whether you’re fascinated by the history of Europe’s rivers or are keen to explore the beautiful foothills of the Wachau Valley, a handful of our Danube river cruises give you the chance to discover the wonders of historic Dürnstein for yourself. We’ve created two special EmeraldACTIVE events to help you explore this momentous town and its beautiful surroundings – find out more about what they entail below.

A guided hike to Dürnstein Castle Following the trail of Richard the Lionheart, join an expert local guide for an energising hike to the ruins of Dürnstein Castle. Along the way, you’ll pass through the heart of beautiful Dürnstein with its cosy wine bars and charming buildings, before beginning your ascent to the ruined keep, high above the town.

In the company of your experienced guide, hear stories of the Lionheart and how his legacy has helped shape the history of the region, while drinking in exceptional views over the surrounding Wachau Valley. At the castle, your guide will provide a fascinating account of its history, and there’ll be plenty of time to drink in the views before your descent back into town.

The hike takes around 1.5 hours and is rated as a three on the EmeraldACTIVE fitness chart, meaning it’s suitable for people of a reasonable fitness.

A guided bike tour along the Danube The second of our EmeraldACTIVE events you can enjoy in Dürnstein is a special guided cycling tour along the Danube River. Starting out from where your Emerald Star-Ship docks, you’ll travel with an expert local guide along the banks of the Danube, passing through Dürnstein before pedalling along the mostly-flat cycleway which runs beside the great river.

With the majestic foothills of the Wachau Valley rising on both sides, this is a wonderful way to while away an afternoon on the river and see more of this exceptional region. Catch a glimpse of Dürnstein Castle as you cycle towards Melk, passing quaint villages and vineyards along the flat 23-mile route. You may even spot your Star-Ship as it makes its way downstream to the next meeting point. Lunch is also provided, and you’ll enjoy it in the great outdoors, with one of Austria’s greatest vistas laid out before you.

The cycle takes around 3.5 hours to complete and is rated as a five on the EmeraldACTIVE fitness chart, meaning it’s suitable for people who are active and used to moderate exercise.

For more information about our exclusive EmeraldACTIVE events, click here.

Delights of the Danube
Nuremberg to Budapest
Offers Available
Save $1,500 per couple Earlybird fare per couple
Conditions apply
8 day
From (CAD)
$ 3,245
View Cruise

Christmas Markets on the Danube
Munich to Budapest
An unforgettable cruise down the iconic Danube & through the heart of old Europe. Walking tours, invitations into the homes of locals & sightseeing excursions showcase the magnificence of yesteryear.
Offers Available
Save $1,500 per couple Earlybird fare per couple
Conditions apply
8 day
From (CAD)
$ 3,255
View Cruise