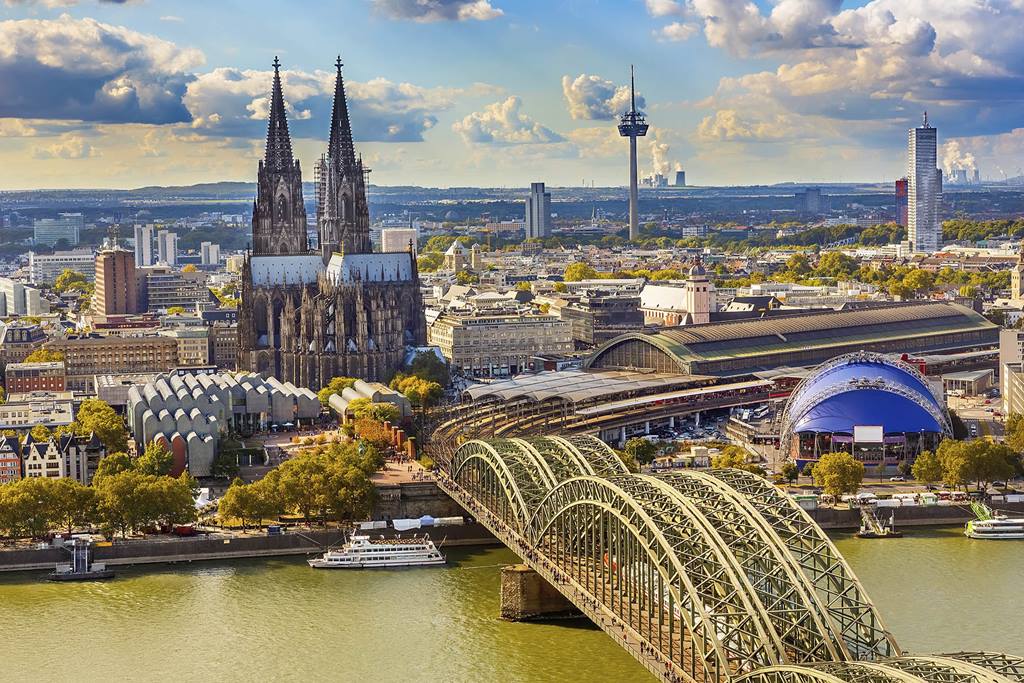 The best things to see and do in Cologne

Guide to the emblematic city of Cologne, famous for its architecture and cultural delight

The major cultural centre within Germany’s Rhineland, and heavily rebuilt over the last 70 years, Cologne’s skyline is unique, enigmatic and forward-thinking whilst unmistakably nostalgic. Although dominated by the iconic Cologne Cathedral, the city is awash with hidden gems and sites to captivate the senses.

Cologne is at the very heart of the Rhine-Ruhr metropolitan region – Germany’s largest region and one of Europe’s more important cultural, historical and economical areas. Since the Middle Ages, when Cologne became a major trade route, it has been a hive of activity and advancement, driven by the powerful Rhine which splits the city in half.

Straddling the mighty river, Cologne can date its history back to 38 BC with the first recorded settlement on the site inhabited by the Ubii, a Cisrhenian Germanic tribe. The Romans then moved in and founded Colonia in 50 AD, which set the foundations for modern day Cologne. As Cologne secured its financial security as a major trade route in the Middle Ages, it also became an important religious centre and pilgrimage route. The two thousand years of history have blessed Cologne with a wonderful tapestry of architectural and cultural delights. The proud Cologne nationals continue the city’s traditions – helping protect the authentic spirit of the Rhine.

With more than 2,000 years’ of historical intrigue lining the Rhine within Cologne’s city borders, there’s a multitude of enticing sights to explore and experiences to enjoy. 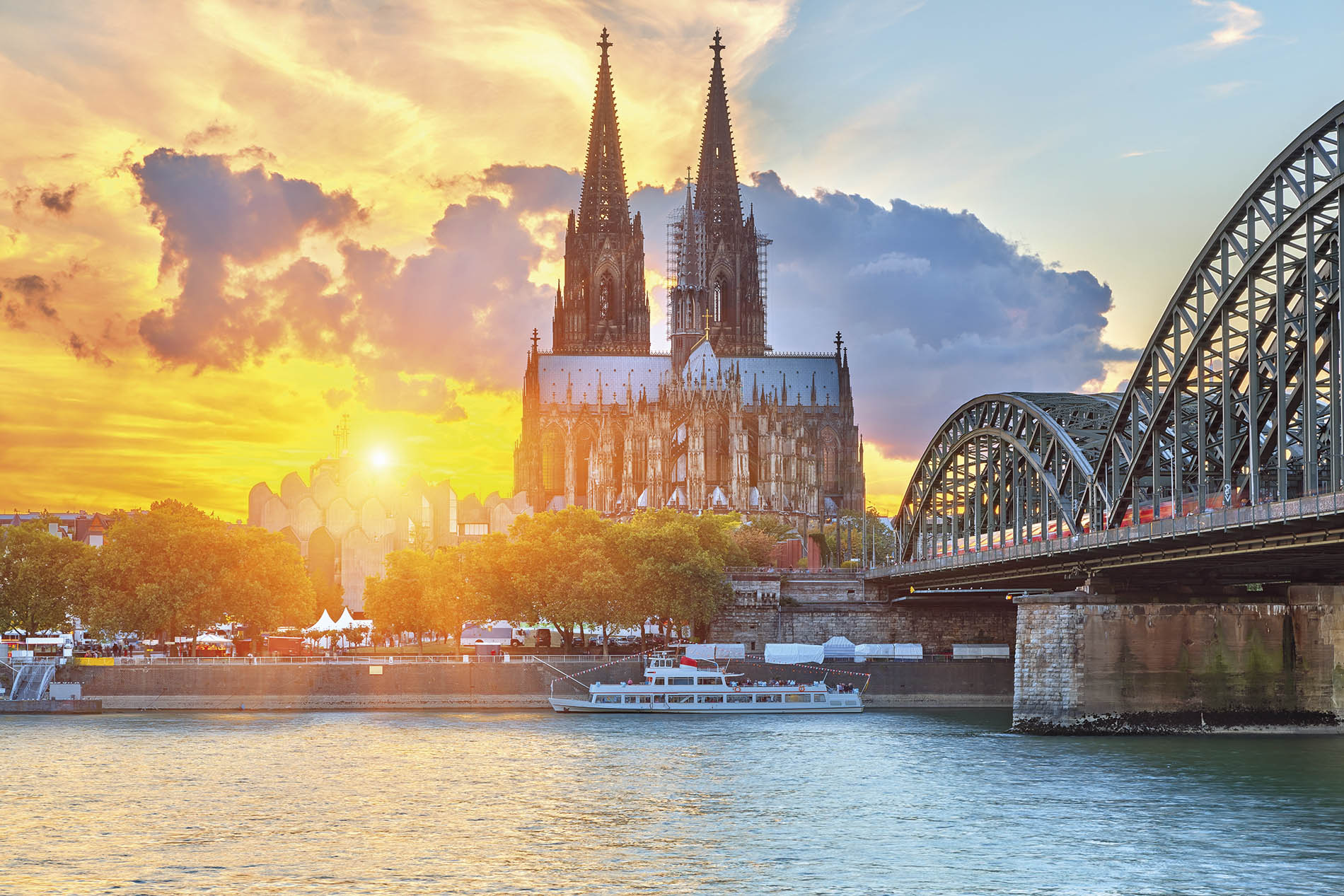 From almost every angle and vantage point, Cologne Cathedral dominates the skyline of Cologne – with the Gothic spires reaching more than 500ft into the air. With the earliest traces of a church on the site dating back to the mid-13th century, the beautiful Cologne Cathedral is Germany’s most visited landmark, attracting more than 20,000 people every day. The stunning Gothic design, completed over a span of a few hundred years, and the rich array of treasures held within create an unforgettable experience.

Perhaps the highlight of the treasures found in the church is the Shrine of the Three Kings, an awe-inspiring, triple sarcophagus said to contain the bones of the Three Wise Men.
MUSEUM LUDWIG
Moving away from the antiquity of Cologne Cathedral to the charisma of this modern, forward-thinking city; Museum Ludwig possesses one of Europe’s finest collections of modern art. With an extensive collection of pop art, abstract and surrealism works, Museum Ludwig boasts one of the largest Picasso collections in Europe. Named for chocolate magnate, Peter Ludwig, who decided to endow his $45million artwork to the public.

Alongside the extensive Picasso collection, the museum also houses works by Salvador Dali and Andy Warhol amongst many others.
HOHENZOLLERN BRIDGE Connecting Cologne to other major cities on the opposing bank of the Rhine, the Hohenzollern Bridge has long been an important travel route for the city. The original Hohenzollern was blown up by German forces towards the end of WWII to prevent Allied troops from entering Cologne. Upon the conclusion of the war, the rebuilding process quickly started. The modern Hohenzollern Bridge is more a target for loved-up couples than retreating troops, with people placing love locks on the fence between the footpath and the railway lines since 2008.
FRAGRANCE MUSEUM
Sitting in the building of the world’s oldest existing fragrance factory, the Fragrance Museum pays homage to Cologne’s incredible contribution to the perfume world. Since 1709, divine fragrances have been devised and created within the four walls of the ornate building which sits across from Cologne City Hall.

Today, the site provides an insight into how fragrances have been created throughout the ages – from the factory’s foundation to the modern day.
FORSTBOTANISCHER GARTEN KÖLN
NATIONAL SOCIALISM DOCUMENTATION CENTRE A sobering experience, the National Socialism Documentation Centre commemorates the lives of those in the Cologne region which were lost due to the Nazi party regime. The largest centre of its type in Germany, the site is located within the former Cologne headquarters of the Gestapo, and has served as a memorial site since 1998. Regarded as one of Europe’s most important and influential WWII memorial sites, the National Socialism Documentation Centre runs a series of educational programmes, designed to inform visitors of the scale of terror, and demonstrate the importance of acceptance across race, faith, belief and colour.

Here are just a few of our favourite facts about Cologne, its 2,000 year-long history and incredibly welcoming people.